Britain is heading for another 2008 crash: here’s why. British public life has always been riddled with taboos, and nowhere is this more true than in the realm of economics. 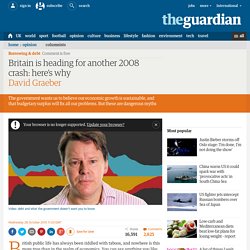 You can say anything you like about sex nowadays, but the moment the topic turns to fiscal policy, there are endless things that everyone knows, that are even written up in textbooks and scholarly articles, but no one is supposed to talk about in public. It’s a real problem. Because of these taboos, it’s impossible to talk about the real reasons for the 2008 crash, and this makes it almost certain something like it will happen again. I’d like to talk today about the greatest taboo of all. Let’s call it the Peter-Paul principle: the less the government is in debt, the more everybody else is. Notice how the pattern is symmetrical? The chips are redistributed. Now, obviously, the “private sector” includes everything from households and corner shops to giant corporations. The people running the government know this. So there has to be debt. UK jobless rate nears six-year low. 13 August 2014Last updated at 09:18 ET The number of people claiming Jobseeker's Allowance is close to a six-year low UK unemployment edged closer to a six-year low in the three months to the end of June, official figures have shown. 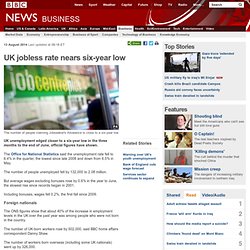 The Office for National Statistics said the unemployment rate fell to 6.4% in the quarter, the lowest since late 2008 and down from 6.5% in May. The number of people unemployed fell by 132,000 to 2.08 million. But average wages excluding bonuses rose by 0.6% in the year to June, the slowest rise since records began in 2001. UK's 'most desirable' postcodes revealed. 24 August 2014Last updated at 19:01 ET The most desirable postcodes in England, Scotland and Wales have been revealed by Royal Mail. 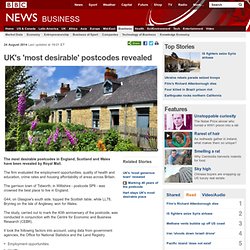 The firm evaluated the employment opportunities, quality of health and education, crime rates and housing affordability of areas across Britain. The garrison town of Tidworth, in Wiltishire - postcode SP9 - was crowned the best place to live in England. G44, on Glasgow's south side, topped the Scottish table, while LL78, Brynteg on the Isle of Anglesey, won for Wales. UK to explore Bitcoin role - George Osborne.

Bank pledge adds to fears that EU referendum will lead to market turmoil. The Bank of England has heightened fears that Britain’s referendum on EU membership will destabilise already fragile financial markets, pledging to provide extra funds to banks and building societies before and after the 23 June vote. 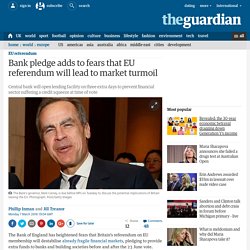 As the Bank’s governor, Mark Carney, prepares to appear before MPs in parliament to discuss the potential implications of leaving the EU, the central bank said it would open its lending facility on three extra days as a precautionary measure to prevent Britain’s financial sector suffering a credit squeeze. The extra funds will be available on two dates before the referendum and one after, in addition to the usual monthly operations run by Threadneedle Street to support short-term borrowing.

Carney, who has warned of the difficulties ahead for the economy, is due before the Treasury select committee on Tuesday morning. He will appear with Sir Jon Cunliffe, deputy governor in charge of financial stability. Push for a Commonwealth trading bloc further politicises free trade. A UK-based lobby group has come up with an idea that has been endorsed by Australian and British politicians alike - a Commonwealth trading bloc. 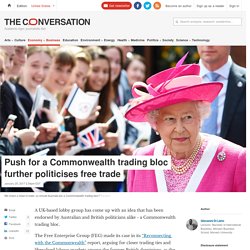 The Free Enterprise Group (FEG) made its case in its “Reconnecting with the Commonwealth” report, arguing for closer trading ties and liberalised labour markets among the former British dominions, as the post-Brexit trading plan for UK. The FEG conveys the views of free trade conservatives who seek to decouple Brexit from protectionism. In particular, the FEG involves Brexit hardliners, such as Andrea Leadsom, secretary of state for environment, food and rural affairs, and Conservative members of Parliament, including the co-author of the report, James Cleverly, whose mother was from Sierra Leone, a Commonwealth nation.