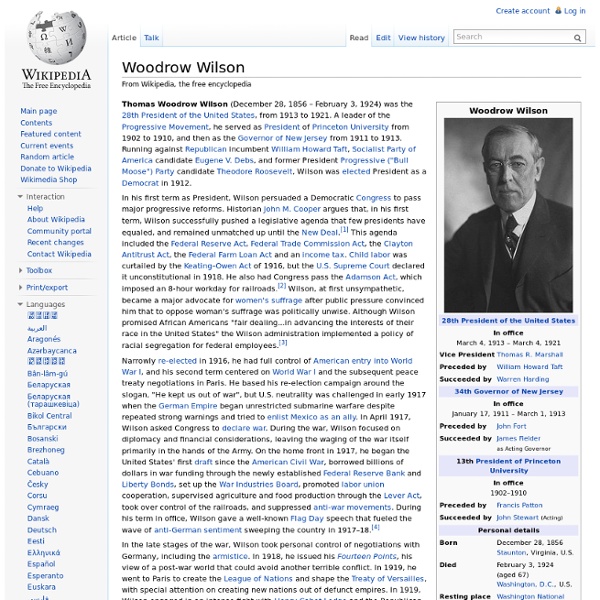 In his first term as President, Wilson persuaded a Democratic Congress to pass a legislative agenda that few presidents have equaled, remaining unmatched up until the New Deal in 1933.[2] This agenda included the Federal Reserve Act, Federal Trade Commission Act, the Clayton Antitrust Act, the Federal Farm Loan Act and an income tax. Child labor was curtailed by the Keating–Owen Act of 1916, but the U.S. Supreme Court declared it unconstitutional in 1918. In the late stages of the war, Wilson took personal control of negotiations with Germany, including the armistice. Early life Wilson was born in Staunton, Virginia, on December 28, 1856. Wilson c. mid 1870s Wilson's father Joseph Ruggles Wilson was originally from Steubenville, Ohio, where his grandfather published a newspaper, The Western Herald and Gazette, which was pro-tariff and anti-slavery.[20] Wilson's parents moved south in 1851 and identified with the Confederacy. Wilson was over ten years of age before he learned to read. Related:  Banking and finance issues

Dionysius of Halicarnassus Dionysius of Halicarnassus Dionysius of Halicarnassus (Greek: Διονύσιος Ἀλεξάνδρου Ἁλικαρνασσεύς, Dionúsios Alexándrou Halikarnasseús, "Dionysios son of Alexandros of Halikarnassos"; c. 60 BC – after 7 BC) was a Greek historian and teacher of rhetoric, who flourished during the reign of Caesar Augustus. His literary style was Atticistic — imitating Classical Attic Greek in its prime. Dionysius' opinion of the necessity of a promotion of paideia within education, from true knowledge of Classical sources, endured for centuries in a form integral to the identity of the Greek elite.[1] Life[edit] He was a Halicarnassian.[1] At some time he moved to Rome after the termination of the civil wars, and spent twenty-two years studying Latin and literature and preparing materials for his history. Works[edit] His major work, entitled Ῥωμαϊκὴ Ἀρχαιολογία (Rhōmaïkḕ Arkhaiología, Roman Antiquities), embraced the history of Rome from the mythical period to the beginning of the First Punic War. Youth[edit]

Great Depression USA annual real GDP from 1910–60, with the years of the Great Depression (1929–1939) highlighted. The unemployment rate in the US 1910–1960, with the years of the Great Depression (1929–1939) highlighted. In the 21st century, the Great Depression is commonly used as an example of how far the world's economy can decline.[2] The depression originated in the U.S., after the fall in stock prices that began around September 4, 1929, and became worldwide news with the stock market crash of October 29, 1929 (known as Black Tuesday). The Great Depression had devastating effects in countries rich and poor. Personal income, tax revenue, profits and prices dropped, while international trade plunged by more than 50%. Unemployment in the U.S. rose to 25%, and in some countries rose as high as 33%.[3] Cities all around the world were hit hard, especially those dependent on heavy industry. Some economies started to recover by the mid-1930s. Start Economic indicators Causes General theoretical explanations

Paris Peace Conference, 1919 Meeting of the Allied Powers after World War I The Paris Peace Conference, also known as the Versailles Peace Conference, was the meeting in 1919 and 1920 of the victorious Allied Powers following the end of World War I to set the peace terms for the defeated Central Powers. The conference involved diplomats from 32 countries and nationalities, and its major decisions were the creation of the League of Nations, as well as the five peace treaties with the defeated states; the awarding of German and Ottoman overseas possessions as "mandates", chiefly to Britain and France; the imposition of reparations upon Germany; and the drawing of new national boundaries (sometimes with plebiscites) to better reflect ethnic boundaries. Although it is often referred to as the "Versailles Conference", only the signing of the first treaty took place at the historic palace, and the negotiations occurred at the Quai d'Orsay in Paris. Overview and direct results[edit] Mandates[edit] British approach[edit]

Gold standard All references to "dollars" in this article refer to the United States dollar, unless otherwise stated. Under a gold standard, paper notes are convertible into preset, fixed quantities of gold. A gold standard is a monetary system in which the standard economic unit of account is based on a fixed quantity of gold. Three types may be distinguished: specie, exchange, and bullion. As of 2013 no country used a gold standard as the basis of its monetary system, although some hold substantial gold reserves. A total of 174,100 tonnes of gold have been mined in human history, according to GFMS as of 2012. History Origin The gold specie standard arose from the widespread acceptance of gold as currency. In modern times, the British West Indies was one of the first regions to adopt a gold specie standard. Australia and New Zealand adopted the British gold standard, as did the British West Indies, while Newfoundland was the only British Empire territory to introduce its own gold coin. Silver Japan

Hellenica Hellenica (Ἑλληνικά) simply means writings on Greek (Hellenic) subjects. Several histories of fourth-century Greece, written in the mold of Thucydides or straying from it, have borne the conventional Latin title Hellenica. The surviving Hellenica is an important work of the Greek writer Xenophon and one of the principal sources for the final seven years of the Peloponnesian War not covered by Thucydides, and the war's aftermath.[1] Xenophon's Hellenica[edit] Many consider this a very personal work, written by Xenophon in retirement on his Spartan estate, intended primarily for circulation among his friends, for people who knew the main protagonists and events, often because they had participated in them. Summary Xenophon's Hellenica is divided into 7 books and describes Greco-persian history from 411 BCE to 362. Book 1 covers the Decelian period of the larger Peloponnesian conflict, from BC 411-406. Book 2 narrates the years BC 406-402. Book 5 narrates the years BC 388-374. See also[edit]

J. P. Morgan John Pierpont "J. P." Morgan (April 17, 1837 – March 31, 1913) was an American financier, banker, philanthropist and art collector who dominated corporate finance and industrial consolidation during his time. In 1892 Morgan arranged the merger of Edison General Electric and Thomson-Houston Electric Company to form General Electric. After financing the creation of the Federal Steel Company, he merged in 1901 with the Carnegie Steel Company and several other steel and iron businesses, including Consolidated Steel and Wire Company owned by William Edenborn, to form the United States Steel Corporation. Morgan died in Rome, Italy, in his sleep in 1913 at the age of 75, leaving his fortune and business to his son, John Pierpont "Jack" Morgan, Jr., and bequeathing his mansion and large book collections to The Morgan Library & Museum in New York. Childhood and education[edit] J. Career[edit] Early years and life[edit] J. J.P. After the 1893 death of Anthony Drexel, the firm was rechristened "J.

Xenophon Xenophon (/ˈzɛnəfən/; Greek: Ξενοφῶν, Xenophōn, Greek pronunciation: [ksenopʰɔ̂ːn]; c. 430 – 354 BC), son of Gryllus, of the deme Erchia of Athens, also known as Xenophon of Athens, was a Greek historian, soldier, mercenary, and student of Socrates. While not referred to as a philosopher by his contemporaries, his status as such is recently a popular topic of debate. He is known for writing about the history of his own times, the late 5th and early 4th centuries BC, especially for his account of the final years of the Peloponnesian War. His Hellenica, which recounts these times, is considered to be the continuation of Thucydides’ The Peloponnesian War. Life[edit] Early years[edit] Little is known about Xenophon other than what he wrote about himself. Anabasis[edit] Expedition with Cyrus[edit] Under the pretext of fighting Tissaphernes, the Persian satrap of Ionia, Cyrus assembled a massive army composed of native Persian soldiers, but also a large number of Greeks. Return[edit]

Lorenzo Valla Lorenzo Valla (Italian pronunciation: [loˈrɛntso ˈvalːa]; also Latinized as Laurentius; c. 1407 – 1 August 1457) was an Italian humanist, rhetorician, educator and Catholic priest. He is best known for his textual analysis that proved that the Donation of Constantine was a forgery. Life[edit] Valla was born in Rome, with a family background of Piacenza; his father, Luciave della Valla, was a lawyer who worked in the Papal Curia. Valla went to Piacenza, and then to Pavia, where he obtained a professorship of eloquence. Invited to Rome by Pope Nicholas V, Pope from 1447 to 1455, and the founder of the Vatican Library, Valla worked there on his Repastinatio.[4] Reputation[edit] Older biographies of Valla give details of many literary and theological disputes, the most prominently one with Gianfrancesco Poggio Bracciolini, which took place after his settlement in Rome. Luther had a high opinion of Valla and of his writings, and Robert Bellarmine called him "Luther's precursor". Works[edit] G.

The Evolution Of Banking With the exception of the extremely wealthy, very few people buy their homes in all-cash transactions. Most of us need a mortgage, or some form of credit, to make such a large purchase. In fact, many people use credit in the form of credit cards to pay for everyday items. The world as we know it wouldn't run smoothly without credit and banks to issue it. In this article we'll, explore the birth of these two now-flourishing industries. Tutorial: Introduction To Banking And Saving Divine DepositsBanks have been around since the first currencies were minted, perhaps even before that, in some form or another. Flipping a CoinThese coins, however, needed to be kept in a safe place. Coins could be hoarded more easily than other commodities, such as 300-pound pigs, so there emerged a class of wealthy merchants that took to lending these coins, with interest, to people in need. Visa RoyalEventually, the various monarchs that reigned over Europe noted the strengths of banking institutions.