How can we make the most of aid? PARIS – The effort to eradicate global poverty has never been more intense. 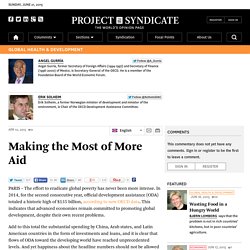 In 2014, for the second consecutive year, official development assistance (ODA) totaled a historic high of $135 billion, according to new OECD data. This indicates that advanced economies remain committed to promoting global development, despite their own recent problems. Add to this total the substantial spending by China, Arab states, and Latin American countries in the form of investments and loans, and it is clear that flows of ODA toward the developing world have reached unprecedented levels. And yet happiness about the headline numbers should not be allowed to obscure opportunities to channel these funds more effectively.

Official aid from donor countries has helped to halve extreme poverty and child mortality, and it has driven progress on many other fronts as well. On average, developing countries raise 17% of their GDP in taxes, compared with 34% in OECD countries. Beyond GDP: Four world maps that give an indication of a country's real growth. Today marks the publication of the 2015 Social Progress Index, which aims to evaluate a county’s overall progress beyond solely economic factors. 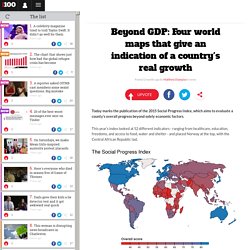 This year’s index looked at 52 different indicators - ranging from healthcare, education, freedoms, and access to food, water and shelter - and placed Norway at the top, with the Central African Republic last. The indicators were grouped into three sections: Read more about the indicators used here. Harvard Business School professor Michael E Porter, an adviser for the index’s publishers, said: “Countries must invest in social progress, not just economic institutions, to create the proper foundation for economic growth.” Steve Almond, one of authors, added: “GDP tells us quite a lot about a country’s progress, but it’s definitely not the whole story.

Here are the top ranked 20 countries on the SPI, with countries not among the world’s 20 biggest economies (measured in GDP by the International Monetary Fund) bolded up. Starbucks continues to sell water drawn from drought-stricken California - Americas - World - The Independent. Ethos bottled water – which Starbucks bought in 2005 – gets some of its water from private springs in California’s Placer County, a part of the state that is under “exceptional drought”, according to reports. 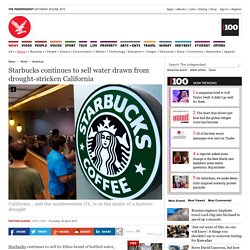 The local paper, the Merced Sun-Star, is reporting that residents are irate at the coffee behemoth for pulling water from the parched region. “If they are using a city well, then it’s the residents’ water,” said Jean Okuye, vice president of Valley Land Alliance. Loading gallery Incredible pictures of the California drought 1 of 15 “I would be very concerned because it could be affecting the residents’ water directly,” she told the Sun-Star.

Starbucks responded by saying that it is getting its water from private springs that are not used by any municipalities. China to invest $50bn in Brazil infrastructure - BBC News. China is planning to invest up to $50bn (£32bn) in Brazil for new infrastructure projects. 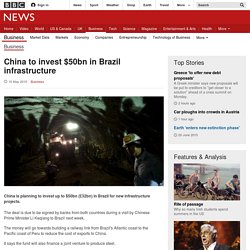 The deal is due to be signed by banks from both countries during a visit by Chinese Prime Minister Li Keqiang to Brazil next week. The money will go towards building a railway link from Brazil's Atlantic coast to the Pacific coast of Peru to reduce the cost of exports to China. The 20 countries where more than 1 in 4 people go hungry - World - News. The annual hunger report by the body found that 795 million people globally suffer from malnutrition. 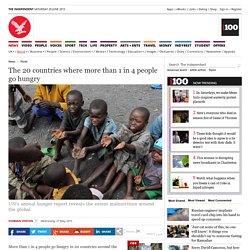 This represents an improvement from figures 25 years ago when a billion people were malnourished. Progress was most notable in Latin America, the Caribbean, East Asia, Southeast and Central Asia. However, despite welcoming an overall decrease in cases of malnutrition, the report noted that many African countries continue to face food crises. Loading gallery Top 20 hungriest countries in the world 1 of 20 For twenty countries, malnutrition still exists to the extent that a quarter of their population goes hungry.

The country worst affected is Haiti, where more than half of its citizens suffer from malnutrition. Read more:Haiti in crisis 3 years on from earthquakeBurundi: The hungriest nation on earth? Haiti still suffers from the impact of an earthquake in the country’s capital city Port-au-Prince in 2010 in which 160,000 lost their lives and 1.5 million Haitians were displaced. The Philippines' child miners risking their lives for gold.