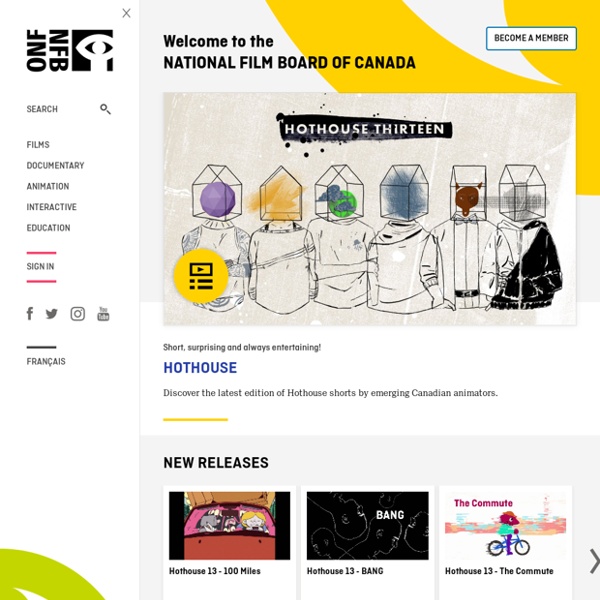 The buffalo are back and better than everWatch this compelling combo of live-action footage, eyewitness accounts and archival photos depicting the story of the buffalo’s revival on the North American plains.Watch now This guy knows a thing or two about global warming 120,000 caribou, 1,500 km of tundra, one epic expedition Rattlesnake: friend or foe? The dragon stock market is really booming! Saddle ‘em up and ride into the sunset A prairie visitor with big dreams We are Canada’s public producer and distributor, and this is our online Screening Room. We offer free streaming of documentary and animated films as well as interactive stories, all of which explore the world we live in from a Canadian point of view.

#9 What is zuguide? Welcome to Zuguide, your new guide to movies and movie trailers. Zuguide is dedicated to providing a huge selection of high quality movie trailers with the best user experience possible. Please let us know what you think and recommend us to your friends! Understanding and Configuring the ip unnumbered Command  [IP Application Services Introduction This document explains the concept of IP unnumbered, and provides several configuration examples for reference. The ip unnumbered configuration command allows you to enable IP processing on a serial interface without assigning it an explicit IP address. The ip unnumbered interface can "borrow" the IP address of another interface already configured on the router, which conserves network and address space. Prerequisites Requirements

Video Transcription Services: Transcribe Video To Text The advent of YouTube and low cost digital cameras has tremendously broadened the quantity and reach of video on the web. The challenge for many web video producers is making it easy for others to find their content. One way to do that is to use Video Transcription as a way to generate search-able text so that users can find your content using search engines. At Speechpad, we've built special tools for uploading and transcribing audio from video, whether it comes from a URL, like YouTube, or the video file directly. Matt Gomez Blog Toontastic App Is Now FREE Google has acquired one of my favorite storytelling apps and it is now FREE (was $9.99) If you don’t already own this app grab it and get those kids creating. Listed below are a few posts I have made previously about the app and you can read about the announcement here.

MOVIECLIPS Home Alone movie clips: THE MOVIE:iTunes - Play - - Digital HD - miss the HOTTEST NEW TRAILERS: CLIP DESCRIPTION:Kevin (Macaulay Culkin) keeps laying down the punishment on the would-be bandits. FILM DESCRIPTION:Home Alone is the highly successful and beloved family comedy about a young boy named Kevin (Macaulay Culkin) who is accidentally left behind when his family takes off for a vacation in France over the holiday season. Once he realizes they've left him "home alone," he learns to fend for himself and, eventually has to protect his house against two bumbling burglars (Joe Pesci, Daniel Stern) who are planning to rob every house in Kevin's suburban Chicago neighborhood. Though the film's slapstick ending may be somewhat violent, Culkin's charming presence helped the film become one of the most successful ever at the time of its release.

8 Overlooked Useful YouTube Tools When most people think about YouTube they think sharing videos and or about all of the videos they can discover. Most people don't think about the useful editing tools that are built into YouTube. The YouTube video editor has some useful features for teachers and students. 1. Create photo slideshows. The YouTube photo slideshow creation tools allow you to specify the length of time that each image is displayed for. Ruby in Twenty Minutes Introduction This is a small Ruby tutorial that should take no more than 20 minutes to complete. It makes the assumption that you already have Ruby installed. (If you do not have Ruby on your computer install it before you get started.) Interactive Ruby

Online screening: Journey To The End Of Coal A project powered by Klynt Editing & publishing app. Journey To The End Of Coal tells you the story of a sacrifice. A sacrifice millions of Chinese coal miners are making everyday, risking their lives and spoiling their land to satisfy their own country’s appetite for economic growth. Your journey begins in Datong which is located just a couple hours away West from Beijing. You travel from there all around the region and visit its major coal mines, from the “best” state-owned complex to the worst private coal plants.