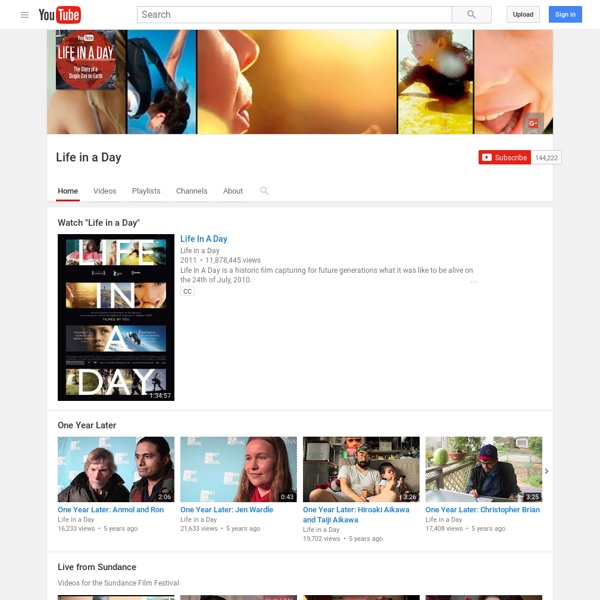 The "Life in a Day" Trailer 3,213,533 views 3 years ago On July 24, 2010, thousands of people around the world uploaded videos of their lives to YouTube to take part in Life in a Day, a historic cinematic experiment to create a documentary film about a single day on earth. Now, it's time to watch their story unfold on the big screen. Directed by Oscar winner Kevin Macdonald, Life in a Day wowed audiences at the Sundance, Berlin and SXSW film festivals and during its YouTube world premiere in January. This summer, you'll be able to watch the movie in a theater near you. Be sure to subscribe and stay tuned to the channel for regular updates including information on how you can become a part of cinema history.

Manufacturing Consent: Noam Chomsky and the Media Manufacturing Consent: Noam Chomsky and the Media (1992) is a documentary film that explores the political life and ideas of Noam Chomsky, a linguist, intellectual, and political activist. Created by two Canadian filmmakers, Mark Achbar and Peter Wintonick, it expands on the ideas of Chomsky's earlier book, Manufacturing Consent: The Political Economy of the Mass Media, which he co-wrote with Edward S. Herman. The film presents and illustrates Chomsky's and Herman's thesis that corporate media, as profit-driven institutions, tend to serve and further the agendas of the interests of dominant, elite groups in the society. A centerpiece of the film is a long examination of the history of The New York Times' coverage of the Indonesian occupation of East Timor, which Chomsky says exemplifies the media's unwillingness to criticize an ally of the elite.

Reuters Photo Fraud The Reuters Photo Scandal A Taxonomy of Fraud A comprehensive overview of the four types of photo fraud committed by Reuters, August, 2006 The recent discovery that the Reuters news agency released a digitally manipulated photograph as an authentic image of the bombing in Beirut has drawn attention to the important topic of bias in the media. But lost in the frenzy over one particular image is an even more devastating fact: that over the last week Reuters has been caught red-handed in an astonishing variety of journalistic frauds in the photo coverage of the war in Lebanon. This page serves as an overview of the various types of hoaxes, lies and other deceptions perpetrated by Reuters in recent days, since the details of the scandal are getting overwhelmed by a torrent of shallow mainstream media coverage that can easily confuse or mislead the viewer.

True Stories: Taking Liberties Riding in on a wave of optimism and real belief in their mantra that things can only get better, they proceeded to enact some of the most authoritarian legislation in recent history. With fast-paced satirical style, this Bafta-nominated film shows how, in just over a decade, some rights and freedoms that took centuries to build up have been rolled back or cut away. The entitlement to habeas corpus – no detention without trial – established when the barons took on King John in the 13th century has, in some circumstances, been abolished. Millions of CCTV cameras up and down the country undermine our right to privacy. A series of measures has made it more and more difficult to exercise freedom of speech and already led to the arrest of a large number of peaceful protesters. Director Chris Atkins has assembled footage to demonstrate how oppressive these new powers can be.

16 Famous Photoshopped Images Throughout History President Abraham Lincoln, circa 1860 This nearly iconic portrait of U.S. President Abraham Lincoln is a composite of Lincoln’s head and the Southern politician John Calhoun’s body. Putting the date of this image into context, note that the first permanent photographic image was created in 1826 and the Eastman Dry Plate Company (later to become Eastman Kodak) was created in 1881. Stalin, circa 1930 Stalin routinely air-brushed his enemies out of photographs.

The Curse of Oil Three-part series that goes on a revealing journey through the world's oil-producing regions, beyond the familiar territory of the Middle East. Now that the oil price appears to be rising inexorably at the pumps, newspapers are full of gloomy predictions related to our increasing addiction to perishable reserves of oil. Bill Cran's series takes a somewhat different approach. We are in fact still amply supplied with oil on planet earth. The problem is that most of it lies in what we cosseted addicts regard as the wrong places.

The Ultimate Beginners Guide To Meditation You have read about the benefits of meditation and just want to get started. You are convinced that meditation can bring life lasting advantages and now you want a small map to guide you through the basics of meditation. You might have tried to sit once in a while, but never had a clear picture of what to do when and how to progress. If you feel yourself nodding yes, then this beginners guide to meditation is for you. Foster Gamble « Thrive Debunked By SlayerX3 One of the central passages of Thrive is a section often referred to as “Follow the Money,” which Thrive fans treat as some sort of slogan. This section contains Foster Gamble and others’ views on fractional reserve banking, the Federal Reserve, the economic crisis, and conspiracy theories related to these. This article debunks those ideas. Fraction Reserve Banking

The Ethics of Digital Manipulation In the example see above, we have changed the red color of M8, the Lagoon Nebula, whose main spectral emission lies in the red portion of the spectrum, to blue with a simple adjustment in Photoshop. When photography was first invented, its overwhelming power came from the fact that it recorded nature more realistically than any other art form had ever done before. Because of this, people trusted it and believed it portrayed "reality" and "truth".

Academy Award for Best Documentary Feature The Academy Award for Documentary Feature is an award for documentary films. Winners and nominees[edit] Following the Academy's practice, films are listed below by the award year (that is, the year they were released under the Academy's rules for eligibility). In practice, due to the limited nature of documentary distribution, a film may be released in different years in different venues, sometimes years after production is complete.

A+C AZIZ + CUCHER, Text published in Kunstforum, Winter 1996 "The Medium is not the only Message"***The Human Genome project is being touted as the greatest scientific achievement of mankind, surpassing in its significance the discoveries of Newton, Darwin, and Einstein. If biology is made to be but an exclusive function of the genetic code, then it becomes just another field in the study of communications. The current excitement about the development of the technologies of communication seems to be coated in a blind faith in progress that is just as naive as that which our predecessors put in nuclear power and the space age. Flooded with enthusiasm, some people believe that these technologies offer unlimited possibilities for the reconfiguration of the self, predicting even the possibility of an ontological shift in the reality of being. With advances in digital technology and robotics, bioengineering is forging the link between the natural and the artificial.