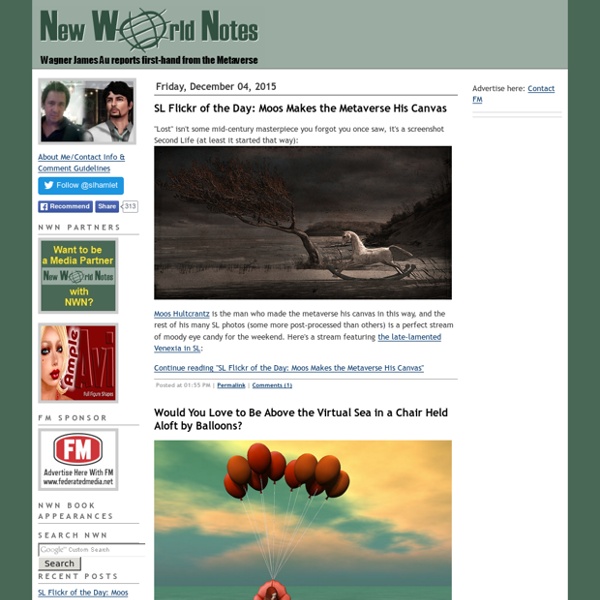 101 Short Stories that Will Leave You Smiling, Crying and Thinking post written by: Marc Chernoff Email Since its inception eighteen months ago, our sister site Makes Me Think (MMT) has truly evolved into a remarkable online community. Every day, users share their thought-provoking life stories and vote on stories that other users have shared. Some are happy, some are sad, and others twist your emotions, pulling them in several directions at once. As stated on the MMT About page, sometimes the most random everyday encounters force us to stop and rethink the truths and perceptions we have ingrained in our minds. I believe the 101 stories listed below perfectly fulfill that description. What do you think?

IN THE GRID: a magazine about second life March 23, 2008 "In The Grid" has shut down, but "Fabb" continues I guess I should've put up a formal notice awhile ago, but wanted to let everyone officially know that as of spring 2007, this blog stopped actively publishing. Now, that said, I do now have 1,536 square meters of virtual land in the grid, as well as plans to try to make some pocket money from a micro-business there; and that's why I still continue to actively make plans for my Second Life prefabricated housing company "Fabb." I want to thank all of you regular gridhoppers again for coming by during this publication's "salad year" (spring 2006 to spring 2007), when interest in MMOs and virtual worlds seemed limitless and the amount of investment money available seemingly unstoppable. March 13, 2007 Gridhopping: Kala Pixie's 'Particlarium' show And dig it I did! Kala's show, though, is something else entirely; it's an experience you literally cannot get in any other medium besides a live 3D online environment. March 12, 2007