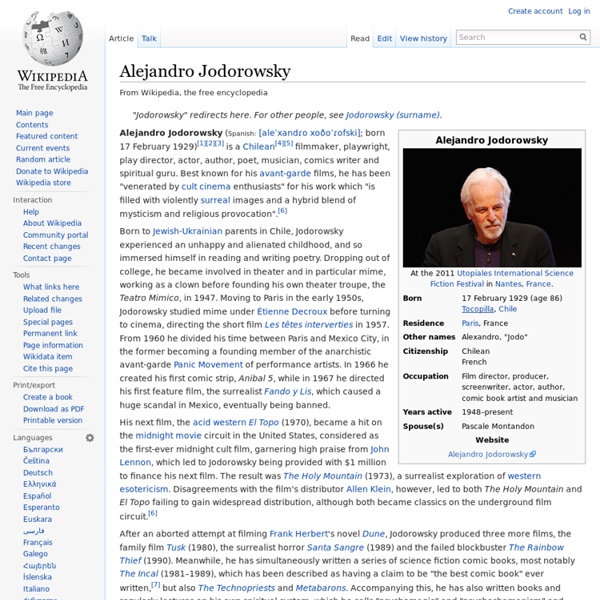 Alejandro Jodorowsky (Spanish: [aleˈxandɾo xoðoˈɾofski]; born 17 February 1929)[1][2][3] is a Chilean[4][5] filmmaker, playwright, play director, actor, author, poet, musician, comics writer and spiritual guru. Best known for his avant-garde films, he has been "venerated by cult cinema enthusiasts" for his work which "is filled with violently surreal images and a hybrid blend of mysticism and religious provocation".[6] Born to Jewish-Ukrainian parents in Chile, Jodorowsky experienced an unhappy and alienated childhood, and so immersed himself in reading and writing poetry. Dropping out of college, he became involved in theater and in particular mime, working as a clown before founding his own theater troupe, the Teatro Mimico, in 1947. Biography[edit] Early years (1929–1952)[edit] Jodorowsky was born in 1929 in the coastal town of Tocopilla, Chile, to parents who were Jewish immigrants from Yekaterinoslav (act. France, Mexico, and Fando y Lis (1953–1969)[edit] Personal life[edit] Related:  G-L

The Spiritual Journey of Alejandro Jodorowsky: The Creator of <i>El Topo</i>: Alejandro Jodorowsky: 9781594771736: Amazon.com Richard Linklater Early life[edit] Career[edit] Austin Film Society[edit] Linklater founded the Austin Film Society in 1985 together with his frequent collaborator Lee Daniel. One of the mentors for the Film Society was former New York City critic for the Soho Weekly News George Morris who had relocated to Austin and taught film there. Morris had previously written articles on Leo McCarey, Vincente Minnelli, George Sidney, and Douglas Sirk. Early directing[edit] It made me see movies as a potential outlet for what I was thinking about and hoping to express. 21st century[edit] Despite the popularity of many of his films and having directed multiple high-paying Hollywood productions, Linklater remains in Austin, Texas and refuses to live or work in Hollywood for any extended period of time. He is also attached to direct to Where'd You Go Bernadette? Significance[edit] Filmography[edit] Feature films[edit] Other works[edit] Reception[edit] Critical reception[edit] Box office[edit] Awards and nominations[edit]

I'm a Cyborg, But That's OK Wiki I'm a Cyborg, But That's OK (Korean: 싸이보그지만 괜찮아; Ssaibogeujiman Gwaenchanha) is a 2006 South Korean romantic comedy film directed by Park Chan-wook. Plot[edit] The film takes place mostly in a mental institution filled with an eclectic menagerie of patients. Young-goon, a young woman working in a factory constructing radios and who believes herself to be a cyborg, is institutionalized after cutting her wrist and connecting it with a power cord to a wall outlet in an attempt to "recharge" herself, an act that is interpreted as a suicide attempt. Her delusion is characterized by refusing to eat (she instead licks batteries and attempts to administer electric shocks to herself), conversing almost solely with machines and electrical appliances and obsessively listening to her transistor radio at night for instruction on how to become a better cyborg. In the middle of the storm, the wind blows their tent away, prompting them to hastily protect their food supplies. Cast[edit] Development[edit]

Doug Liman Early life[edit] Liman was born in New York City, the son of Ellen (née Fogelson), a painter and writer, and Arthur L. Liman, a lawyer well known for his public service, which included serving as chief counsel for the Senate Iran-Contra hearings. He has two siblings, Emily and Lewis.[2] Liman was raised Jewish.[3] Career[edit] In 1999, Liman shot a commercial for Nike in which Tiger Woods, without letting the ball touch the ground, repeatedly bounced a ball on his club and then drove it into the distance. Liman at the Cannes Film Festival, May 2010 In 2009, he co-founded the website 30ninjas.com which is geared towards fans of action movies and television, gaming, extreme sports and viral videos. Most of his career has been associated with the production company, Hypnotic. Liman serves on the boards of the Legal Action Center, Symphony Space in New York City, and is actively involved in the Arthur Liman undergraduate fellowship program. Filmography[edit] Executive producers credits only

Richard Bandler Richard Wayne Bandler (born February 24, 1950) is an American author and trainer in the field of self-help. He is best known as the co-creator (with John Grinder) of Neuro-linguistic programming (NLP), a methodology intended to understand and change human behavior-patterns. He also developed other systems named Design Human Engineering (DHE) and Neuro Hypnotic Repatterning (NHR). Education and background[edit] Bandler holds a BA (1973) in philosophy and psychology from the University of California, Santa Cruz (UCSC) and an MA (1975) in psychology from Lone Mountain College in San Francisco.[1] Co-founding of Neuro-linguistic programming (NLP)[edit] While a student at University of California, Santa Cruz (UCSC) Bandler also led a Gestalt therapy group. Bandler rented accommodation to Gregory Bateson. Bandler and Grinder went on to author The Structure of Magic Volume II (1976), Patterns of the Hypnotic Techniques of Milton H. Corine Christensen case[edit] Other works[edit] Books[edit] Seminars

Mike Judge This article is about the cartoonist. For the billiards player, see Michael Judge. For the Roman Catholic priest, see Mychal Judge. Early life and education[edit] Career[edit] After graduating from UCSD with a degree in physics, Judge's first job was as a programmer for the F-18 fighter at Support Systems Associates, Inc. Animation, film, and TV work[edit] In 1997, Judge created King of the Hill for the Fox Network. In 1999, Judge had a voice cameo in South Park: Bigger, Longer and Uncut, the feature-length film adaptation of the popular Comedy Central series; he voiced Kenny McCormick when he was unhooded towards the end of the film. Since fall 2003, Judge and fellow animator Don Hertzfeldt have run an animation festival, "The Animation Show". In 2005, Mike Judge was presented with the Austin Film Festival's Outstanding Television Writer Award by Johnny Hardwick. His newest animated series, The Goode Family, debuted on ABC and was cancelled after one season. Political views[edit]

Neuro-linguistic programming Not to be confused with Natural language processing (also NLP) Neuro-linguistic programming (NLP) is an approach to communication, personal development, and psychotherapy created by Richard Bandler and John Grinder in California, United States in the 1970s. Its creators claim a connection between the neurological processes ("neuro"), language ("linguistic") and behavioral patterns learned through experience ("programming") and that these can be changed to achieve specific goals in life.[1][2] Bandler and Grinder claim that the skills of exceptional people can be "modeled" using NLP methodology, then those skills can be acquired by anyone.[3][4][5][6][7] Bandler and Grinder also claim that NLP can treat problems such as phobias, depression, habit disorder, psychosomatic illnesses, myopia,[8] allergy, common cold,[9] and learning disorders, often in a single session.[10][11][12][13] NLP has been adopted by some hypnotherapists and in seminars marketed to business and government.[14][15]

Richard Kelly (director) James Richard Kelly (born March 28, 1975) is an American film director and writer, known for writing and directing the cult classic Donnie Darko in 2001. His fourth film, and second feature, Southland Tales, a rough cut of which screened in competition at the 2006 Cannes Film Festival,[4] was released November 16, 2007 and stars Dwayne Johnson, Sarah Michelle Gellar, Seann William Scott, Kevin Smith and Miranda Richardson. In 2008, Kelly's production company Darko Entertainment announced that it was producing the adaptation of the bestselling book I Hope They Serve Beer in Hell with director Bob Gosse.[5][6] The book's author Tucker Max detailed Kelly's involvement in the process on his blog.[7][8] Richard Kelly's style is composed of Steadicam based tracking shots and camera movement in general, satirical elements (as seen sparsely in Donnie Darko and much more prominently in Southland Tales), comedy, drama, and enigmatic plots.