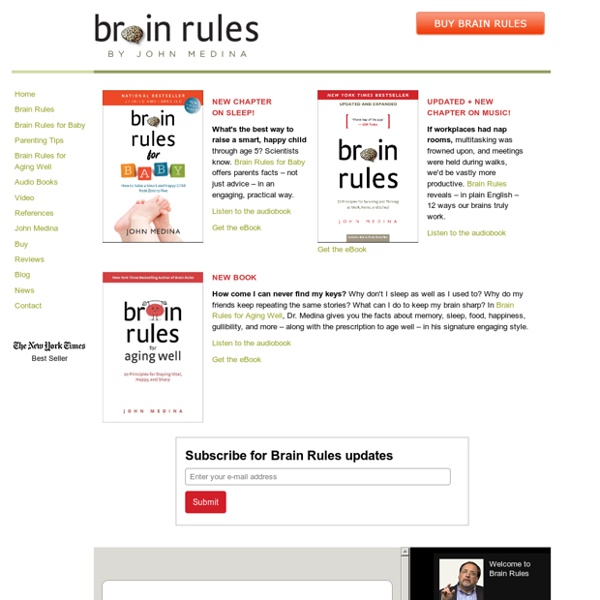 What's the best way to raise a smart, happy child through age 5? Scientists know. Brain Rules for Baby offers parents facts – not just advice – in an engaging, practical way. Now updated and expanded with a new chapter on sleep! Read the Introduction If workplaces had nap rooms, multitasking was frowned upon, and meetings were held during walks, we'd be vastly more productive.

Mindful Space in the Library I have been working to be more mindful in my daily activities. Mindfulness is “the basic human ability to be fully present, aware of where we are and what we’re doing, and not overly reactive or overwhelmed by what’s going on around us.” This reminds me so much of one of AASL’s Standards under Explore/Grow” V.D.2 Learners develop through experience and reflection by recognizing capabilities and skills that can be developed, improved, and expanded. The Science Behind Student Stress A new study finds that when students experience an academic setback such as a bad grade, the amount of cortisol—the so-called stress hormone—in their bodies typically spikes. For most students it drops back down to normal levels a day later, but for some it stays high. These students remain fixated on the setback and have difficulty moving forward. The researchers analyzed the stress levels of students at two high schools in central Texas during an especially stressful time—the transition into high school. Students completed daily surveys asking about the stress they experienced, and daily saliva samples were collected to measure their cortisol levels.

Eric Mazur on new interactive teaching techniques In 1990, after seven years of teaching at Harvard, Eric Mazur, now Balkanski professor of physics and applied physics, was delivering clear, polished lectures and demonstrations and getting high student evaluations for his introductory Physics 11 course, populated mainly by premed and engineering students who were successfully solving complicated problems. Then he discovered that his success as a teacher “was a complete illusion, a house of cards.” The epiphany came via an article in the American Journal of Physics by Arizona State professor David Hestenes. He had devised a very simple test, couched in everyday language, to check students’ understanding of one of the most fundamental concepts of physics—force—and had administered it to thousands of undergraduates in the southwestern United States. Mazur tried the test on his own students. Some soul-searching followed.

Professor Curt Bonk's e-Learning World This is the homepage of Curtis J. Bonk, Ph.D. Curt is Professor at Indiana University teaching psychology and technology courses. Curt is affiliated with the cognitive sciences program and is adjunct in the School of Informatics at IU. He founded SurveyShare, Inc. in 2003 which he sold in 2010. In addition, he has been founder and president of CourseShare, LLC since 1999. Watch What's Working: Carol Dweck Talks Growth Mindset What about the kids that don't "get" school? What about the kid who doesn't see the point or the purpose of sitting in a desk and doing assignments that have never motivated her in the past? Or the kid who is always assigned tasks that perpetuate the notion that he is simply "not that smart?"

The History of Jane Doe by Michael Belanger ★ ”[An] impressive debut…Suffused with quirky humor and equal parts life-affirming and heartbreaking, John Green fans will gobble this one up.“ — Kirkus, starred review “Readers looking for a moving, realistic portrayal of depression will appreciate this exceptional debut.” —Publishers Weekly “A powerful debut with a story for fans of John Green and Jennifer Niven… guaranteed to tug at your heartstrings.” — BuzzFeed “A YA triple threat…genuine, believable, and relatable.” Don’t Lecture Me: Rethinking How College Students Learn Flickr:AllHails At the star-studded Harvard Initiative on Learning and Teaching (HILT) event earlier this month, where professors gathered to discuss innovative strategies for learning and teaching, Harvard’s professor Eric Mazur gave a talk on the benefits of practicing peer instruction in class, rather than the traditional lecture. The idea is getting traction. Here’s more about the practice.

Sophia upgrades its website with 25,000 free academic tutorials and more Sophia.org has enhanced its social teaching and learning platform to include more than 25,000 free tutorials on math, science, English, and more—all in an ad-free environment. What’s more, the site has become a key destination for teachers who are looking to “flip” their classrooms, its makers say. According to a survey of 400 teachers who use Sophia, 85 percent of teachers who have flipped their classroom have seen improved grades—and nearly all who have flipped would recommend it to others. In addition, more than 80 percent of teachers who hadn’t flipped their classroom are anxious to learn more about how to flip.

Core SEL Competencies Social and emotional learning (SEL) enhances students’ capacity to integrate skills, attitudes, and behaviors to deal effectively and ethically with daily tasks and challenges. Like many similar frameworks, CASEL’s integrated framework promotes intrapersonal, interpersonal, and cognitive competence. There are five core competencies that can be taught in many ways across many settings. Many educators and researchers are also exploring how best to assess these competencies. The ability to accurately recognize one’s own emotions, thoughts, and values and how they influence behavior. The ability to accurately assess one’s strengths and limitations, with a well-grounded sense of confidence, optimism, and a “growth mindset.”Identifying emotionsAccurate self-perceptionRecognizing strengthsSelf-confidenceSelf-efficacyVideo: Learn more.

Marc Brackett, Ph.D. Director | Email me Marc Brackett, Ph.D., is founding director of the Yale Center for Emotional Intelligence and Professor in the Child Study Center at Yale University. His grant-funded research focuses on: (1) the role of emotions and emotional intelligence in learning, decision making, relationship quality, and mental health; (2) the measurement of emotional intelligence; (3) best practices for teaching emotional intelligence; and (3) the influences of emotional intelligence training on children’s and adults’ effectiveness, health, creativity, and both school and workplace climate. Marc has published 125 scholarly articles and has received numerous awards, including the Joseph E. Zins Award for his research on social and emotional learning and an honorary doctorate from Manhattanville College. He also is a distinguished scientist on the National Commission on Social, Emotional, and Academic Development.

9 Characteristics Of 21st Century Learning The label of “21st Century learning” is vague, and is an idea that we here at TeachThought like to take a swing at as often as possible, including: –weighing the magic of technology with its incredible cost and complexity –underscoring the potential for well thought-out instructional design –considering the considerable potential of social media platforms against its apparent divergence from academic learning Some educators seek out the ideal of a 21st century learning environment constantly, while others prefer that we lose the phrase altogether, insisting that learning hasn’t changed, and good learning looks the same whether it’s the 12th or 21st century. At TeachThought, we tend towards the tech-infused model, but do spend time exploring the limits and challenges of technology, the impact of rapid technology change, and carefully considering important questions before diving in head-first.

Placeholder Text Replacements When designing anything with content (websites, brochures, etc.), if you don’t have the real content, using Lorem Ipsum is the most common way to fill those spaces. However, for anyone who designs regularly and needs such filler text, it is pretty boring to use Lorem Ipsum again and again. If you want to try an alternative to Lorem Ipsum, there are several web-based generators which are easy-to-use, customizable and, usually, fun. Check them out: P.S.