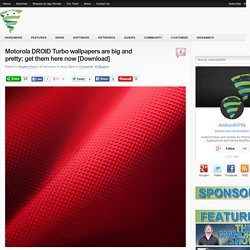 Coupled with a Snapdragon 805 processor and a Quad HD display, the massive 3,900mAh battery makes the DROID Turbo almost unmatched among its Android brethren for combination of power and endurance. The DROID Turbo is still one of the few smartphones to carry a Quad HD display, which means we’re pretty interested to see not only what the display looks like, but what wallpapers Motorola and Verizon have hidden in the device. Luckily, the stock Motorola DROID Turbo wallpapers have been dug out, and we have all 14 of them available down below.

Be sure to click through to the full resolution image before you save it: Naturally, the resolution of each of the wallpapers is 2880×2560 which should be sufficient for pretty well any device available on the market right now. What do you think of the Motorola DROID Turbo wallpapers? Source: Droidviews. Download the Oppo Find 7 wallpaper here. The Oppo Find 7 is one of the more tantalizing smartphone announcements to start 2014: with two variants, both with cutting edge hardware and a 13MP camera which uses Oppo smarts to produce 50MP photos, Oppo has definitely pulled out all the stops in the hopes of catch the Android smartphone giants. 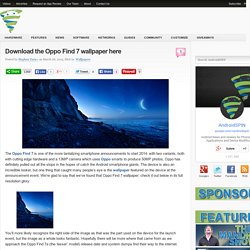 The device is also an incredible looker, but one thing that caught many people’s eye is the wallpaper featured on the device at the announcement event. We’re glad to say that we’ve found that Oppo Find 7 wallpaper; check it out below in its full resolution glory: You’ll more likely recognize the right side of the image as that was the part used on the device for the launch event, but the image as a whole looks fantastic. Hopefully there will be more where that came from as we approach the Oppo Find 7a (the ‘lesser’ model) release date and system dumps find their way to the internet. What do you think about this wallpaper? Source: Oppo Forums. Rachel Carson: Google Doodle Honors Author of "Silent Spring" Tuesday's Google Doodle honors the 107th birthday of Rachel Carson, the writer and environmentalist who warned of the widespread use of pesticides in her 1962 book Silent Spring. 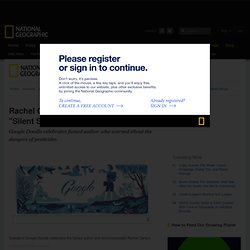 Carson's landmark book documented the dramatic impact of human-produced chemicals on the natural world and is widely credited with launching the modern-day environmental movement. Silent Spring detailed the previously unexamined and virtually unregulated practice of dumping, spraying, dusting, and otherwise distributing harmful chemicals into the environment. (Learn more about water pollution.) The chemical industry, government scientists, and much of the media attacked Carson as hysterical, often invoking her gender. They challenged her facts and competency, but her book became a bestseller. Reviewing Silent Spring in 1962, Time magazine cast doubt on its conclusions.

Books on the Side After World World II she became disturbed by the growing use of pesticides and wanted to warn the public about their dangers. SD comic con 2012 Booth 1735. It's San Diego Comic con again, if you are coming this year, stop by my booth at #1735 and say hi! 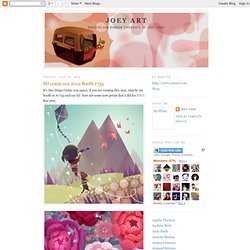