Local Governments Crack Down On The Monstrous Evil of Tiny Free Lending Libraries. Two Physicists Wanted To Explode A Nuclear Bomb To Find Neutrinos. ​How To Fight Fire With Nuclear Bombs. Why? : WTF. The 10 Most Insignificant Wars in History. TIL that Steven Russell escaped from prison by using laxatives to fake the symptoms of AIDS. He then called the prison, posing as a doctor, asking for prisoners interested in an experimental treatment, and volunteered. Once out of Texas, he sent death cer. Yo (app) Arbel stated interest in expanding the app to include more functionality - including a feature which could be used by bloggers to send their followers a 'yo' whenever they post an update; a feature which has since been implemented.[5] The app's first content update was released in August 2014, adding extra functionality to it, including the ability to send web links and hashtags, and creating user profiles.[6] On 20 June 2014, a group of Georgia Tech students hacked the app, allowing them to retrieve any user's phone number and spam/spoof 'yo's to any user.[7] After the exploit was fixed, Arbel hired one of the hackers to work with the company.[8] Since its release, Yo has been downloaded over 2 million times and over four million 'yo's were sent in one day.[4][9] Joachim Fels, an economist at Morgan Stanley, expressed interest in the app due to its simplicity.[10] The app reached number 3 in the iOS App Store, but has since begun to fall in ranking.[11] 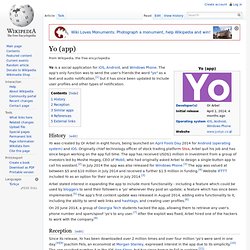 5 Ways Delivering Food Is Like Living in a Tarantino Movie. The first job I ever had was working as a delivery driver for Mr. 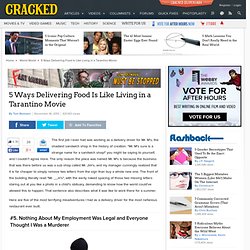 M's, the shadiest sandwich shop in the history of creation. "Mr. Sadly, this is not The Onion. We begin bombing in five minutes. On August 11, 1984, United States President Ronald Reagan, while running for re-election, was preparing to make his weekly Saturday radio address on National Public Radio. 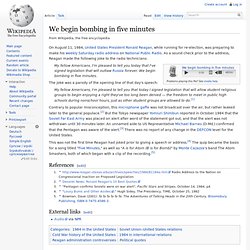 As a sound check prior to the address, Reagan made the following joke to the radio technicians: The book of Chaos, Discord and Confusion. Why TV News is a Waste of Human Effort: One Example Worth a Trillion Dollars — C. G. P. Grey. It’s Simpsons time and Homer’s insightful remark that a trillion dollars is, quote: “a spicy meatball!” 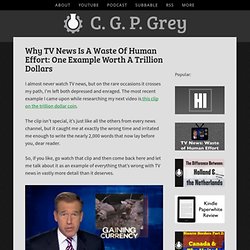 In case you didn’t notice, that Simpsons show was about a trillion dollar bill and we are discussing a trillion dollar coin. Picky yes, but the two forms of cash have different laws regarding how they are created. Which isn’t a big deal, it’s just the whole reason the trillion dollar coin story exists in the first place. Now, perhaps, you think I’m complaining too much. But take this into account: The Simpsons clip is exactly half way through the video, and so far you don’t know more than what the headline already told you: that a trillion dollar coin may be a thing.

Pirate Party Crashes Spy Drone in Front of German Chancellor Angela Merkel. With the German elections less than a week away, the Pirate Party has pulled off a quite extraordinary stunt. 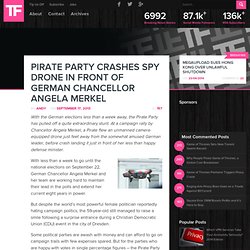 At a campaign rally by Chancellor Angela Merkel, a Pirate flew an unmanned camera-equipped drone just feet away from the somewhat amused German leader, before crash landing it just in front of her less than happy defense minister. With less than a week to go until the national elections on September 22, German Chancellor Angela Merkel and her team are working hard to maintain their lead in the polls and extend her current eight years in power. How Pi was nearly changed to 3.2 - Numberphile. Ten Illegal Things To Do In London. Had plans to nuke the moon. By Brian Todd and Dugald McConnell You could easily skip by it in an archive search: a project titled "A Study of Lunar Research Flights. 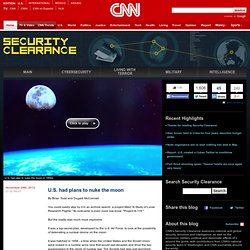 " Its nickname is even more low-brow: "Project A-119. " But the reality was much more explosive. It was a top-secret plan, developed by the U.S. Air Force, to look at the possibility of detonating a nuclear device on the moon. It was hatched in 1958 - a time when the United States and the Soviet Union were locked in a nuclear arms race that would last decades and drive the two superpowers to the verge of nuclear war. Reiffel, now 85, spoke to CNN at his home in Chicago. According to Reiffel's report, "The motivation for such a detonation is clearly threefold: scientific, military and political. " The military considerations were frightening. That included talk of having nuclear launch sites on the moon, he said. "These are horrendous concepts," Reiffel said, "and they are hopefully going to remain in the realm of science fiction for the rest of eternity.

" Weird News, Odd and Freaky Stories in Sunshine Coast. THE suggestion would be considered unbelievable - if it involved anyone other than Clive Palmer. 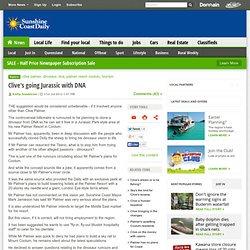 The controversial billionaire is rumoured to be planning to clone a dinosaur from DNA so he can set it free in a Jurassic Park-style area at his new Palmer Resort in Coolum. Mr Palmer has, apparently, been in deep discussion with the people who successfully cloned Dolly the sheep to bring his dinosaur vision to life. If Mr Palmer can resurrect the Titanic, what is to stop him from trying with another of his other alleged passions - dinosaurs?

This is just one of the rumours circulating about Mr Palmer's plans for Coolum. It is now possible to receive text messages from a cow's vagina. Or you know....treat those who produce our milk better. 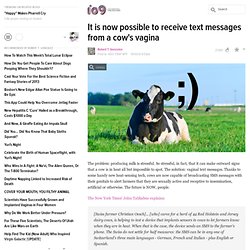 Quality over quantity and all that...but yeah, mass production sucks. And I don't think inserting a texting device in their gentiles is going to help it suck less. I believe that milk cows are mostly kept in stalls, so they wouldn't have much of a chance to do any of that, and the milk machines are very stressful on them it could knock them out of heat faster than a cow in a regular situation Yeah, my first thought with this wasn't "what cool technology! " (though the science/tech on its own is impressive), but "why is this necessary? " Man yodels with chickens techno style.

Everything you know is wrong: Oranges aren’t orange. The 18th Century Version of L. Ron Hubbard Convinced the World He Was Immortal.