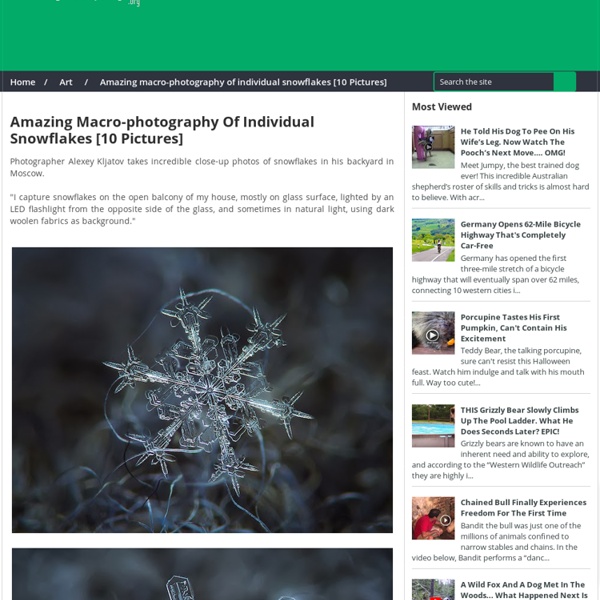 Photographer Alexey Kljatov takes incredible close-up photos of snowflakes in his backyard in Moscow. "I capture snowflakes on the open balcony of my house, mostly on glass surface, lighted by an LED flashlight from the opposite side of the glass, and sometimes in natural light, using dark woolen fabrics as background." Source:

10+ Best Bird Photos Of 2017 Have Been Announced, And They’re Truly Amazing Birds are a secretive and mysterious species, which makes them one of the hardest to photograph. The British Trust for Ornithology, however, is taking time to appreciate photographers around the world who have mastered the art of capturing the quiet, gentle beauty of birds, and they've just announced their winners for 2017. Show Full Text The Bird Photographer of the Year competition was initiated in 2015, and reportedly received a flood of entries right away.

Nurse reveals the top 5 regrets people make on their deathbed By: Bronnie Ware, inspirationandchai.com, Guest Contributor For many years I worked in palliative care. My patients were those who had gone home to die. The 33 Most Beautiful Abandoned Places In The World Many people doesn’t know, and didn’t even heard about these famous abandoned places. Many of these places are really something amazing, but they are also really sad when you take a closer look at them. On the folowing list, you can see abandoned planes, abandoned ships, as well as the abandoned houses, and so many other things, that are really amazing and magnificent. So, check out these amazing abandoned places photos.

What Does Your Handwriting Say About You? What Does Your Handwriting Say About You? graphology Graphology is the study of handwriting, especially when employed as a means of analyzing a writer's character, personality, abilities, etc. The 15 Craziest Things In Nature You Won’t Believe Actually Exist Mother Nature is beautiful and amazing because we can see many amazing stuff like these 15 things that you won’t believe they actually exist. All these places are real. It is hard to believe in that, but that is true. 1. Volcanic lightning aka “dirty thunderstorms.” 2.

Nearly Frozen Waves Captured On Camera By Nantucket Photographer Beautiful, Giant, And Nearly Frozen Waves Are Captured On Camera By Nantucket Photographer Photographer Jonathan Nimerfroh found himself staring at an ocean full of Slurpee. The waters of the Atlantic Ocean looked like it due to the unusually cold temperatures that were making it freeze. Who Needs Photoshop When These 15 Unbelievable Pictures Are Completely REAL? Whoa. You’ll think you’re bring tricked, but these photos aren’t manipulated or faked… they are 100% real. Each of these jaw-dropping scenes were captured just as they exist. A mixture of perfect timing, optical illusions and just flat-out insane nature led to this gallery being created. All I can say is: Woah.

Top 20 Earth Pictures found on Stumble Upon Everybody knows that Stumbleupon is an great source for beautiful photography, nature, pets, arts and much more. They have millions of users and they are probably the most wide used source for finding quality content. Today, we collected 20 popular photographs from Stumbleupon. Most of them have been seen for more than million times each. We hope you’ll enjoy… Improve Your Google Search Skills [Infographic] Don’t limit yourself to just plugging in simple search terms to Google; check out this infographic and learn a search string search or two. You don’t need to limit yourself to searching just for simple strings; Google supports all manner of handy search tricks. If you want to search just HowToGeek.com’s archive of XBMC articles, for example, you can plug in site:howtogeek.com XBMC to search our site. Get More Out of Google [HackCollege via Mashable]

Beautiful Photography of Wild-Foraged Mushrooms Plus, 14 mind-blowing facts about mushrooms People are so obsessed with plants and animals, we often forget a third category of organisms that can nourish us, heal us and heal our planet — fungi. An artist and self-proclaimed “nature nerd” is doing her part to remind us of this magical kingdom with her mostly-edible fungi arrangements. After spending most of her adult life as a designer in New York and San Francisco, Jill Bliss sold everything she owned to reconnect with nature on the Salish Sea Islands. While many artists focus on flowers, one of Bliss’ favorite natural wonders to photograph and paint are the stunning array of wild mushrooms she collects.

27 Breathtaking places to visit in your lifetime... Zhangye Danxia landform in Gansu, China The rainbow formation is the result of red sandstone and mineral deposits being laid down for over 24 million years. The swing at the “End of the World” in Baños, Ecuador At the edge of Ecuador sits a rickety tree house (casa del árbol) overlooking an active volcano in the near distance. With it comes a swing with no harnesses, inviting only the bravest of risk-takers to experience a killer view. The Great Blue Hole in Belize