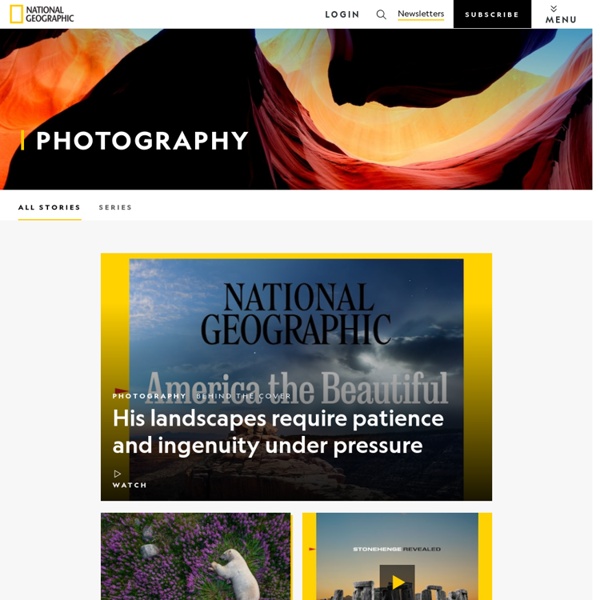 Complementary and Alternative Medicine Index (CAM) A.D.A.M., Inc. is accredited by URAC, also known as the American Accreditation HealthCare Commission (www.urac.org). URAC's accreditation program is an independent audit to verify that A.D.A.M. follows rigorous standards of quality and accountability. A.D.A.M. is among the first to achieve this important distinction for online health information and services. Learn more about A.D.A.M.'s editorial policy, editorial process and privacy policy.

Photography: A Brief History and Timeline By Liz Masoner Updated October 26, 2016. Photography has come a long way in its relatively short history. In almost 200 years, the camera developed from a plain box that took blurry photos to the high-tech mini computers we use in our DSLRs and smartphones today. Photos Recent Photo Galleries Photos Photos Pictures of the Day for April 27, 2014 Photo Editor's Blog Photographer Uses Light and Shadows to Frame Human Forms in the City Want to see some beautiful street photographs that make use of light and shadows? Look no further than the project “Man on Earth” by London-based photographer Rupert Vandervell. Each image in the series shows a single person’s figure framed by the shadows and features of a big city. Some of the people are walking through narrow channels of light caused by giant skyscrapers, while others are sitting in a glowing circle of light found in bus stops at night. Vandervell says that his goal with the series was to focus on the subjects rather than the city. The pictures are “less about the environment they are taken in and more about the ‘human factor’ moving through it,” he writes.

10 Search Engines to Explore the Invisible Web Not everything on the web will show up in a list of search results on Google or Bing; there are lots of places that their web crawlers cannot access. To explore the invisible web, you need to use specialist search engines. Here are our top 12 services to perform a deep internet search. What Is the Invisible Web?

Amazing images of wolves as they were seen by the couple who lived in a ten for SIX YEARS to better. Call of the wild: Stunning images capture couple's extraordinary bond with wolves after spending SIX YEARS living among them Most people run from wolves but one brave couple spent six years of their lives living with the feared creatures in an effort to better understand their way of life. Jim and Jamie Dutcher lived in a tent within the world's largest wolf enclosure in a bid to observe and document the behaviour of the wild animals. The married couple lived without electricity or running water and braved temperatures of -40 Farenheit as they spent six years living in the 25 acre enclosure on the edge of Idaho's Sawtooth wilderness. And as these intimate images show, Jim, 69 and Jamie, 50, formed an incredible bond with the animals and gained a unique insight into the lives and behaviour of wolves.

» Top Tools & Directory C4LPT EmailShare 0EmailShare Learning Technologies Magazine, October 2010 This is a two-part article that looks at the emerging trends in learning tools and the implications for Learning & Development. History of photography - Wikipedia The commercial introduction of computer-based electronic digital cameras in the 1990s soon revolutionized photography. During the first decade of the 21st century, traditional film-based photochemical methods were increasingly marginalized as the practical advantages of the new technology became widely appreciated and the image quality of moderately priced digital cameras was continually improved. Etymology[edit] The coining of the word "photography" is usually attributed to Sir John Herschel in 1839.

Magical Properties of Herbs Acacia (Acacia Nilotica) Also called gum arabic. Gender: Masculine, Planet: Sun, Element: Air, Deities: Osiris, Astarte, Diana, Ra Protection, Psychic Powers. Burn with sandalwood to open psychic centers. Parts used: dried gum, leaves, wood Wedding Photography: 20 Top Photographers & Their Masterpieces A picture is worth a thousand words but I think wedding photos are more than that; it consists of love, promise, memory, passion, and joy. That’s what makes them timeless and priceless at the same time. Wedding photography has come a long way. Thanks to camera technology and powerful image editing tools, wedding photographers are able to create and manipulate photos, creating out of the box wedding photos like never before. (Image Source: Adam Alex Photography) When it comes to a session with your wedding photographer, every couple look forward to have something beautiful, something uniquely-us at the end of the day.

100 Time-Saving Search Engines for Serious Scholars While burying yourself in the stacks at the library is one way to get some serious research done, with today’s technology you can do quite a bit of useful searching before you ever set foot inside a library. Undergraduates and grad students alike will appreciate the usefulness of these search engines that allow them to find books, journal articles and even primary source material for whatever kind of research they’re working on and that return only serious, academic results so time isn’t wasted on unprofessional resources. Note: Visit our updated list for the latest in academic search engines. General

Fragrant Nature Resort, Kerala, India - Ayurveda Treatment Packages. Fragrant Nature Resort offers wellness holidays away from the hustle and bustle of city life. It nestles amongst graceful palms, on five acres of beautifully landscaped, waterside land, on a breathtakingly beautiful and serene lake. "Prana", the spa at Fragrant Nature offers a wide range of Ayurveda treatments. 'Aroma Fresh' is the hotel's horticulture wing, which has a retail network of food stores across South India. Cannon The cannon was the first internal combustion engine, made possible by the discovery of nitrates Contents Introduction The smoothbore cannon, first appearing in the early 14th century in Europe, assumed its classic form at the beginning of the 17th century, which persisted unchanged to the mid-19th century, when it was superseded by the breechloading rifled gun.

Always amazed by the nature's beauty! by bluelemon Aug 17