World business, finance, and political news from the Financial Times 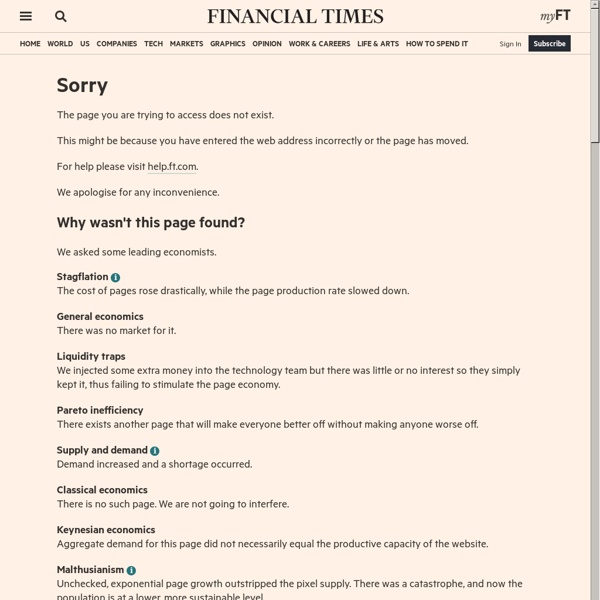 National Lawyers Guild Files FOIA Requests Seeking Evidence of Federal Role in Occupy Crackdown With Congress no longer performing its sworn role of defending the US Constitution, the National Lawyers Guild Mass Defense Committee and the Partnership for Civil Justice today filed requests under the Freedom of Information Act (FOIA) asking the Department of Justice, the Department of Homeland Security, the FBI, the CIA and the National Parks Service to release "all their information on the planning of the coordinated law enforcement crackdown on Occupy protest encampments in multiple cities over the course of recent days and weeks." According to a statement by the NLG, each of the FOIA requests states, "This request specifically encompasses disclosure of any documents or information pertaining to federal coordination of, or advice or consultation regarding, the police response to the Occupy movement, protests or encampments." The police assault on Zuccotti Park led to the Occupation Movement's biggest rally yet on Nov. 17

233 Ways to Make Money Many of our customers are entrepreneurs. In this post, I thought I’d try to light the entrepreneurial fire under some of our other readers by publishing the world’s longest list of ways to make money. I aimed to include as many ways to make money that don’t require special training as possible (and I’ll add to the list over time so bookmark it now).

May Copyright: GraphicObsession 24 May 2012 Global carbon-dioxide (CO2) emissions from fossil-fuel combustion reached a record high of 31.6 gigatonnes (Gt) in 2011, according to preliminary estimates from the International Energy Agency (IEA). This represents an increase of 1.0 Gt on 2010, or 3.2%. Coal accounted for 45% of total energy-related CO2 emissions in 2011, followed by oil (35%) and natural gas (20%). Russian Middle Class to Number 74 Million by 2050, HSBC Predicts Russia’s middle class will double to 60 percent of the population by 2050, benefiting hotels and restaurants, according to a report by HSBC Holdings Plc. (HSBA) By that time, about 74 million Russians will earn between $3,000 and $15,000 a year, making them part of the middle class, according to an HSBC report received by e-mail today. That compares with 42 million, or 30 percent of the population last year, when 14 million people made less than $1,000, it said.

If There Is a Run on the Banks, Know Who To Blame It isn’t Alex Jones or Gerald Celente Paul Joseph Watson Prison Planet.com Monday, November 21, 2011 Following our coverage last week of the fallout from the collapse of MF Global, Gerald Celente appeared on the Alex Jones Show numerous times to warn listeners that the only way to really ensure their money was protected was to withdraw it all from banks and financial institutions without delay. Celente was a high-profile victim of the theft of almost $1 billion in funds that was stolen from MF Global customers and its subsidiaries and has since gone “missing” after reports the money was initially transferred to JP Morgan. Celente himself lost a six figure sum that he was preparing to cash in to take physical delivery of gold bullion in December. Some customers have been told they may get around 60 per cent of their money back.

Theodore R. Daniels: Looking Ahead: Have It When You Need It Many of us look forward to retirement. We can hardly wait for the time to put down our tools and change our daily routine. In spite of this desire, many Americans do not plan for retirement until just before they stop working. By then, it is often too late. You can expect to live 15 to 20 years after age 65. May Copyright: GraphicObsession Rise in oil prices has been magnified by a fall in the value of the euro against the dollar 24 May 2012 Europe is on track to spend over USD500 billion on oil imports this year, which is well in excess of the Greek government’s USD370 billion debt, the IEA’s Executive Director said on 23 May in Paris.

Russia’s middle class must grow - Putin The middle class must grow significantly in Russia, Prime Minister Vladimir Putin said in the preamble to his upcoming election agenda, published on Monday in the Izvestiya daily. Putin, who usually caters his comments to the country's blue collar workers, said in his article that Russia had seen a rise in the amount of people who could be called middle class over the last 10 years. “These are people with incomes that allow them to choose whether to spend or save, what to buy and how to spend their vacations,” Putin said. “These are people who can choose their politics. As a rule, they have the educational that allows them to relate to politicans with awareness, and not vote with the heart alone.”

Ijara Home Finance : Ijara wa Iqtina : Lease Purchase Sharia Compliance - How It Works Sharia Compliance Topics: Documents, Fatwa, Hajj Qualification, How It Works Our IjaraTM Home Financing Program was created by a Board of Internationally recognized Shariah Scholars since 1996. The program complies with Islamic Finance Guidelines and is free of both types of Riba and also Gharar. The program is called "Lease to Purchase" (Ijara wa Iqtina). The Lease to Purchase or Lease to Own contract blends many of the concepts used by traditional lending institutions.