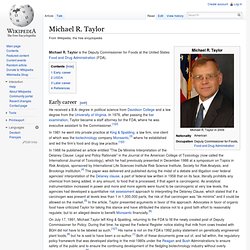 Taylor is the Deputy Commissioner for Foods at the United States Food and Drug Administration (FDA). Early career[edit] He received a B.A. degree in political science from Davidson College and a law degree from the University of Virginia. In 1976, after passing the bar examination, Taylor became a staff attorney for the FDA, where he was executive assistant to the Commissioner.[1][2] In 1981 he went into private practice at King & Spalding, a law firm, one client of which was the biotechnology company Monsanto,[3] where he established and led the firm's food and drug law practice.[1][2] On July 17, 1991, Michael Taylor left King & Spalding, returning to the FDA to fill the newly created post of Deputy Commissioner for Policy.

USDA[edit] Between 1994 and 1996 he moved to the United States Department of Agriculture (USDA), where he was Administrator of the Food Safety & Inspection Service. Later career[edit] In 1999, a lawsuit (Alliance For Bio-Integrity v. References[edit] >> Michael Taylor The World According to Monsanto part 3 of 10. Monsanto Planting Seeds In the White House? Apparently, President Obama is considering appointing Michael Taylor to head the new Food Safety Working Group. 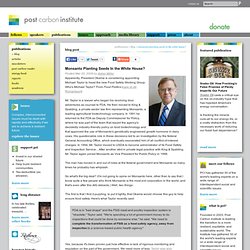 Who's Michael Taylor? From Food Politics (care of Jill Richardson): Mr. Taylor is a lawyer who began his revolving door adventures as counsel to FDA. He then moved to King & Spalding, a private-sector law firm representing Monsanto, a leading agricultural biotechnology company. The man has moved in and out of roles at the federal government and Monsanto so many times he probably has whiplash.

So what's the big deal? The first is that I find it puzzling, to put it lightly, that Obama would choose this guy to help ensure food safety. FDA: Meet Michael R. Taylor, J.D., Deputy Commissioner for Foods. "We look forward to working in new ways within FDA and with partners in other government agencies, the consumer community, and the food industry to tackle the important challenges – and the unprecedented opportunities – we currently face. 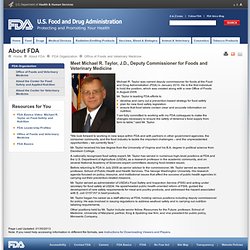 " Mr. Taylor received his law degree from the University of Virginia and his B.A. degree in political science from Davidson College. A nationally recognized food safety expert, Mr. Taylor has served in numerous high-level positions at FDA and the U.S. Department of Agriculture (USDA), as a research professor in the academic community, and on several National Academy of Sciences expert committees studying food-related issues. Before returning to FDA in July 2009 as senior advisor to the commissioner, Mr. FDA: Meet Michael R. Taylor, J.D., Deputy Commissioner for Foods. Office of Foods and Veterinary Medicine > Meet Michael R. Taylor, J.D., Deputy Commissioner for Foods and Veterinary Medicine.

Monsanto Planting Seeds In the White House? New Official Named to Improve U.S. Food Safety. MICHAEL R. TAYLOR — A RETURN PERFORMANCE? I HAD ASKED ONLY THREE OF MY 10 PREPARED QUESTIONS when the voice on the other end of the phone interrupted. 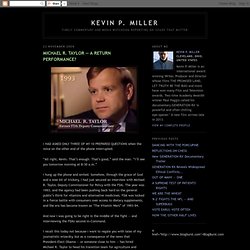 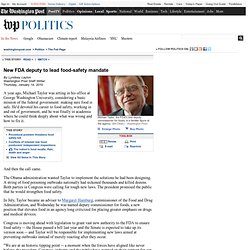 He'd devoted his career to food safety, working in and out of government, and he was finally in academia where he could think deeply about what was wrong and how to fix it. And then the call came. The Obama administration wanted Taylor to implement the solutions he had been designing. A string of food poisoning outbreaks nationally had sickened thousands and killed dozens. Both parties in Congress were calling for tough new laws. In July, Taylor became an adviser to Margaret Hamburg, commissioner of the Food and Drug Administration, and Wednesday he was named deputy commissioner for foods, a new position that elevates food in an agency long criticized for placing greater emphasis on drugs and medical devices. Food > Gulf of Mexico Oil Spill Update. FDA operates a mandatory safety program for all fish and fishery products under the provisions of the Federal Food, Drug and Cosmetic Act, the Public Health Service Act, and related regulations. 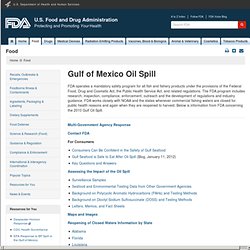 The FDA program includes research, inspection, compliance, enforcement, outreach and the development of regulations and industry guidance. FDA works closely with NOAA and the states whenever commercial fishing waters are closed for public health reasons and again when they are reopened to harvest. Below is information from FDA concerning the 2010 Gulf Oil Spill. When you're good at something, you want to leverage that. Monsanto's specialty is killing stuff. In the early years, the St. 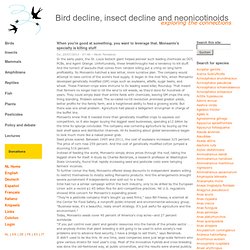 Louis biotech giant helped pioneer such leading chemicals as DDT, PCBs, and Agent Orange. Unfortunately, these breakthroughs had a tendency to kill stuff. And the torrent of lawsuits that comes from random killing put a crimp on long-term profitability. So Monsanto hatched a less lethal, more lucrative plan. The company would attempt to take control of the world's food supply. Monsanto knew that it needed more than genetically modified crops to squeeze out competitors, so it also began buying the biggest seed businesses, spending $12 billion by the time its splurge concluded. Seed prices soared. Instead of feeding the world, Monsanto simply drove prices through the roof, taking the biggest share for itself. To further corner the field, Monsanto offered steep discounts to independent dealers willing to restrict themselves to mostly selling Monsanto products.