Argentina: The Country That Monsanto Poisoned. By Michael Warren and Natacha Pisarenko / overgrowthesystem.com via filmsforaction.com American biotechnology has turned Argentina into the world’s third-largest soybean producer, but the chemicals powering the boom aren’t confined to soy and cotton and corn fields. 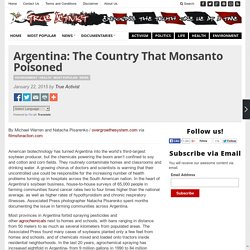 They routinely contaminate homes and classrooms and drinking water. A growing chorus of doctors and scientists is warning that their uncontrolled use could be responsible for the increasing number of health problems turning up in hospitals across the South American nation. In the heart of Argentina’s soybean business, house-to-house surveys of 65,000 people in farming communities found cancer rates two to four times higher than the national average, as well as higher rates of hypothyroidism and chronic respiratory illnesses. 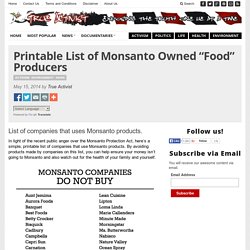 In light of the recent public anger over the Monsanto Protection Act, here’s a simple, printable list of companies that use Monsanto products. By avoiding products made by companies on this list, you can help ensure your money isn’t going to Monsanto and also watch out for the health of your family and yourself. If you wish to print, simply click on the list and choose “Print” from your browser’s menu (or press CTRL+P/CMD+P).

MUST WATCH Monsanto Fools Bluff Called. Ha! Ha! We don't need em. How Monsanto is Destroying the Brains and Health of Everyone. Dr. 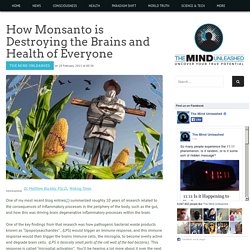 Matthew Buckley, PSc.D., Waking Times One of my most recent blog entries(1) summarized roughly 10 years of research related to the consequences of inflammatory processes in the periphery of the body, such as the gut, and how this was driving brain degenerative inflammatory processes within the brain. One of the key findings from that research was how pathogenic bacterial waste products known as “lipopolysaccharides” , (LPS) would trigger an immune response, and this immune response would then trigger the brains immune cells, the microglia, to become overly active and degrade brain cells. (LPS is basically small parts of the cell wall of the bad bacteria.)

This response is called “microglial activation”. In short, the process can work like this (note there are other ways to trigger this): 1) Pathogenic bacteria overg row in intestines and create waste products (LPS) which activate the immune system to respond and produce a chemical called “Interleukin 1b”. So what does this all mean? Patent CA2741523A1 - Human ebola virus species and compositions and methods t... Monsanto invests in Ebola Virus with DOD. Children Of Vietnam Veterans Health Alliance ~ Agent Orange Dioxin Survivors Uniting Internationally ~ 501C3 Registered Non-Profit. 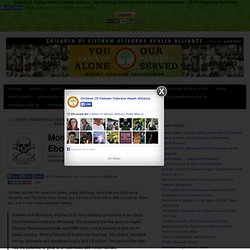 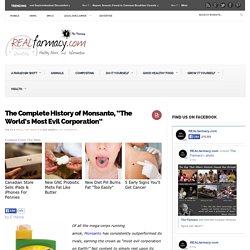 Not content to simply rest upon its throne of destruction, it remains focused on newer, more scientifically innovative ways to harm the planet and its people. 1901: The company is founded by John Francis Queeny, a member of the Knights of Malta, a thirty year pharmaceutical veteran married to Olga Mendez Monsanto, for which Monsanto Chemical Works is named. The company’s first product is chemical saccharin, sold to Coca-Cola as an artificial sweetener. 5 GMO Myths Busted. Tom Theobald looks at Neonicotinoid insecticides and the mass-death of bee co... Monsanto and Xe (Acadami) By Earth First! 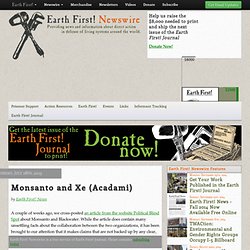 News A couple of weeks ago, we cross-posted an article from the website Political Blind Spot about Monsanto and Blackwater. While the article does contain many unsettling facts about the collaboration between the two organizations, it has been brought to our attention that it makes claims that are not backed up by any clear, concrete evidence. We have looked at other articles “debunking” the story. They also raise good points, but some have holes in them. The Monsanto 71: Senators Who Betrayed Constituents in Favor of Biotech Dollars. Once upon a time, a system was designed in which “the people” elected delegates to go to Washington DC. 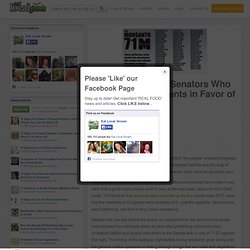 These members of Congress had the specific duty of representing the wishes of their constituencies when laws were being voted upon. The success of last weekend’s March Against Monsanto should have made it very clear that a great many people wish to see, at the very least, labels on toxic GMO foods. The fact that this success was covered up by the media does NOT mean that the members of Congress were unaware of it – just the opposite. Our success was frightening, and that is why it was covered up. You'll Never Guess Who Is Sitting On Monsanto's Board Of Directors. Monsanto has made sure they’ve covered all of their bases when it comes to controlling the population. 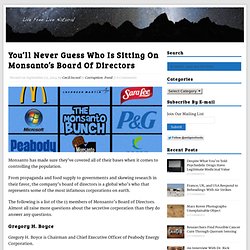 From propaganda and food supply to governments and skewing research in their favor, the company’s board of directors is a global who’s who that represents some of the most infamous corporations on earth. The following is a list of the 13 members of Monsanto’s Board of Directors. Almost all raise more questions about the secretive corporation than they do answer any questions. Gregory H. Boyce Gregory H. Peabody Energy Corporation is the largest private sector coal company in the world. In 2013 alone, Peabody spent $3,770,000 lobbying Washington to continue polluting not only the United States but the world. Don't need Monsanto. Einstein on bees. 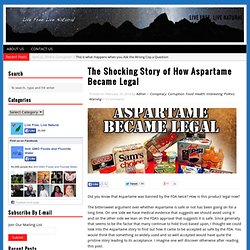 Searle, accidentally discovers aspartame, a substance that is 180 times sweeter than sugar yet has no calories. Spring 1967– Searle begins the safety tests on aspartame that are necessary for applying for FDA approval of food additives. Fall 1967– Dr. November 1970– Cyclamate, the reigning low-calorie artificial sweetener — is pulled off the market after some scientists associate it with cancer. December 18, 1970– Searle Company executives lay out a “Food and Drug Sweetener Strategy’ that they feel will put the FDA into a positive frame of mind about aspartame.

Spring 1971– Neuroscientist Dr. February 1973– After spending tens of millions of dollars conducting safety tests, the G.D. May 1974– Attorney, Jim Turner (consumer advocate who was instrumental in getting cyclamate taken off the market) meets with Searle representatives to discuss Dr. March 8, 1977– G. Sri Lanka Bans Roundup Herbicide, Brazil Considers, World Prepares for March Against Monsanto 3. Soybean Yields Lower in Top GMO-Producing Countries Much Lower than Non-GMO, United Nations Data Shows. The claim that genetically modified organisms (GMOs) were created to “feed the world” and are necessary for that purpose has been repeated over and over again by Biotech companies such as Monsanto, and even repeated in mainstream media articles. 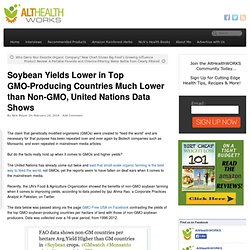 But do the facts really hold up when it comes to GMOs and higher yields? The United Nations has already come out twice and said that small-scale organic farming is the best way to feed the world, not GMOs, yet the reports seem to have fallen on deaf ears when it comes to the mainstream media. Recently, the UN’s Food & Agriculture Organization showed the benefits of non-GMO soybean farming when it comes to improving yields, according to data posted by Ijaz Ahma Rao, a Corporate Practices Analyst in Pakistan, on Twitter. #BoycottMonsanto – A Simple List of Companies to Avoid.