>> Michael Taylor The World According to Monsanto part 3 of 10. Prof. Al Bartlett on exponential growth. Russia Warns Obama: Monsanto. 7 Shares Share Tweet Email The shocking minutes relating to President Putin’s meeting this past week with US Secretary of State John Kerry reveal the Russian leaders “extreme outrage” over the Obama regimes continued protection of global seed and plant bio-genetic giants Syngenta and Monsanto in the face of a growing “bee apocalypse” that the Kremlin warns “will most certainly” lead to world war. 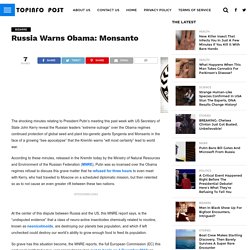 According to these minutes, released in the Kremlin today by the Ministry of Natural Resources and Environment of the Russian Federation (MNRE), Putin was so incensed over the Obama regimes refusal to discuss this grave matter that he refused for three hours to even meet with Kerry, who had traveled to Moscow on a scheduled diplomatic mission, but then relented so as to not cause an even greater rift between these two nations. “It is clear that these chemicals have the potential to affect entire food chains. ABC commissioned world renowned environmental toxicologist Dr. Source Disclaimer. Michael Sweeney ~ Revolt Against Mongressanto: GMO Crops Torched in America. Proparanoid June 21 2013 (Thanks, LB) Not one media outlet outside of local circles has dared to mention it, perhaps because government fears that if the public learns that other people are getting fighting mad (literally), they might join in, and become an actual revolution. 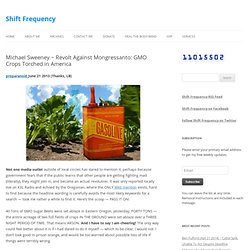 It was only reported locally live on KXL Radio and echoed by the Oregonian, where the ONLY Web mention exists, hard to find because the headline wording is carefully avoids the most likely keywords for a search — took me rather a while to find it. Here’s the scoop — PASS IT ON! 40 Tons of GMO Sugar Beets were set ablaze in Eastern Oregon, yesterday. Toxic shock: California allows up to one thousand times more glyphosate in drinking water than needed to cause breast cancer in women.

6 Secrets "They" Don't Want You To Know. December 18, 2013 - Even the dumbest person knows that the world is controlled by certain individuals. 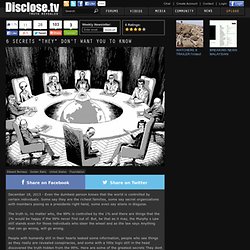 Some say they are the richest families, some say secret organizations with members posing as a presidents right hand, some even say aliens in disguise. The truth is, no matter who, the 99% is controlled by the 1% and there are things that the 1% would be happy if the 99% never find out of. But, be that as it may, the Murphy s Law still stands even for those individuals who steer the wheel and as the law says Anything that can go wrong, will go wrong.

People with humanity still in their hearts leaked some information, people who see things as they really are revealed conspiracies, and some with a little logic still in the head discovered the truth hidden from the 99%. Factory farming and the destruction of lands and lives in Argentina. GMO and Monsanto: Glyphosate Weed Killer Found in Human Urine across Europe. People in 18 countries across Europe have been found to have traces of the weed killer glyphosate in their urine, show the results of tests commissioned by Friends of the Earth Europe and released today [1]. 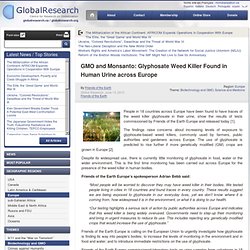 The findings raise concerns about increasing levels of exposure to glyphosate-based weed killers, commonly used by farmers, public authorities and gardeners across Europe. The use of glyphosate is predicted to rise further if more genetically modified (GM) crops are grown in Europe [2]. Despite its widespread use, there is currently little monitoring of glyphosate in food, water or the wider environment. Why Is Monsanto Evil, But DuPont Isn't? Stephen D. 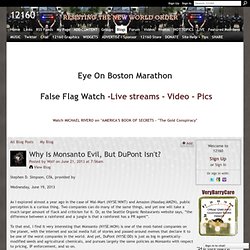 Simpson, CFA, provided by Wednesday, June 19, 2013 As I explored almost a year ago in the case of Wal-Mart (NYSE:WMT) and Amazon (Nasdaq:AMZN), public perception is a curious thing. Two companies can do many of the same things, and yet one will take a much larger amount of flack and criticism for it. Monsanto Has Taken Over the USDA. The U.S. 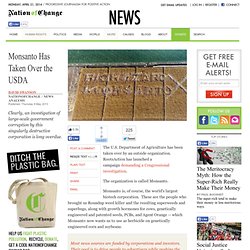 Department of Agriculture has been taken over by an outside organization. RootsAction has launched a campaign demanding a Congressional investigation. MONSANTO Now Owns BLACKWATER. Monsanto hires infamous mercenary firm Blackwater to track activists around the world. (NaturalNews) Remember the private mercenary army Blackwater that caused such a stir in Iraq during an unprovoked attack in 2007? 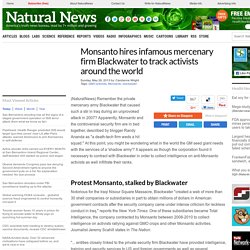 Apparently, Monsanto and the controversial security firm are in bed together, described by blogger Randy Ananda as "a death-tech firm weds a hit squad. " Groundbreaking Investigation Reveals Monsanto Teaming Up With US Military to Target GMO Activists. A hard-hitting investigative report recently published by a prominent German newspaper has uncovered some shocking details about the tactics being used by chemical giant Monsanto in assuming control of global agriculture. 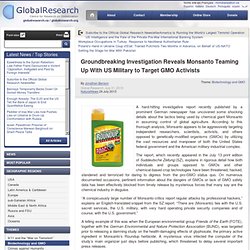 According to this thorough analysis, Monsanto appears to be aggressively targeting independent researchers, scientists, activists, and others opposed to genetically-modified organisms (GMOs) by utilizing the vast resources and manpower of both the United States federal government and the American military-industrial complex. The report, which recently appeared in the July 13 print edition of Suddeutsche Zeitung (SZ), explains in rigorous detail how both individuals and groups opposed to GMOs and other chemical-based crop technologies have been threatened, hacked, slandered and terrorized for daring to digress from the pro-GMO status quo. Monsanto’s targeting activities made possible through corporate takeover of federal government. MONSANTO – Scientists Under Attack Full Length Documentary. Eye On Boston Marathon False Flag Watch -Live streams - Video - Pics Watch MICHAEL RIVERO on "AMERICA'S BOOK OF SECRETS - "The Gold Conspiracy" MONSANTO – Scientists Under Attack Full Length Documentary There is no difference between natural foods and genetically modified foods? 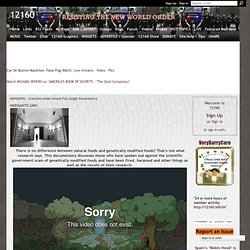 Monsanto Executive Is Among World Food Prize Winners! What a joke! Nytimes For the first time in its 27-year history, a prestigious award for enhancing the global food supply has gone to a creator of genetically modified crops, a top scientist at Monsanto. 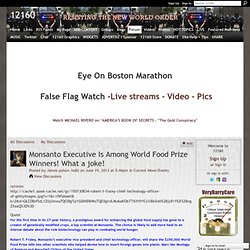 A scientist from the Massachusetts Institute of Technology (MIT) and her colleague found that, contrary to industry claims, the active ingredient in Roundup, glyphosate, interferes with human digestion and the biosynthesis of nutrients, which can cause a host of fatal diseases. Most of the chronic illnesses that plague Western society, in fact, are the same residual consequences that can arise due to exposure to Roundup. Monsanto Found Guilty of Chemical Poisoning in Landmark Case. Monsanto’s Dirty Dozen: The 12 Most Awful Products Made By Monsanto. When you take a moment to reflect on the history of product development at Monsanto, what do you find? Here are twelve products that Monsanto has brought to market. See if you can spot the pattern… #1 – Saccharin Did you know Monsanto got started because of an artificial sweetener?

John Francisco Queeny founded Monsanto Chemical Works in St. After mounting pressure from consumers, the Calorie Control Council[5], and manufacturers of artificial sweeteners and diet sodas, along with additional studies[6] (several conducted by the sugar and sweetener industry) that reported flaws in the 1970s studies, saccharin was delisted from the NIH’s Carcinogen List. . #2 – PCBs During the early 1920s, Monsanto began expanding their chemical production into polychlorinated biphenyls (PCBs) to produce coolant fluids for electrical transformers, capacitors, and electric motors. EXPLOSIVE VIDEO: The RISE Against Monsanto - GLOBAL MARCH MAY 25TH. Monsanto Stock in Danger, Investor Warns. (Before It's News) I was shocked to read a story in Canada’s highly conservative national newspaper, The Globe and Mail, a couple of days ago in which well-known investor and columnist Chris Umiastowski, P.Eng., MBA, warned of the risk in holding Monsanto stock.

It was refreshing to read the views of an investor who is not just concerned about the bottom line but also the potential health and environmental risks in such a conservative paper. Monsanto found guilty of chemical poisoning in landmark case. A French farmer who can no longer perform his routine farming duties because of permanent pesticide injuries has had his day in court, literally, and the perpetrator of his injuries found guilty of chemical poisoning. The French court in Lyon ruled that Monsanto’s Lasso weedkiller formula, which contains the active ingredient alachlor, caused Paul Francois to develop lifelong neurological damage that manifests as persistent memory loss, headaches, and stuttering during speech. Genetically Modified Organisms: Sobering Consequences.