New Trial Evidence Suggests Government Colluded With Monsanto. I once read an interview with legendary fiction writer Stephen King in which he told the interviewer that he simply reads the newspaper to get ideas for his novels, declaring that truth was far scarier than fiction. 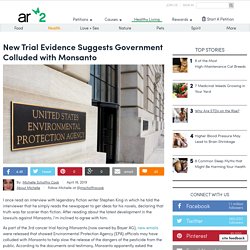 After reading about the latest development in the lawsuits against Monsanto, I’m inclined to agree with him. As part of the 3rd cancer trial facing Monsanto (now owned by Bayer AG), new emails were released that showed Environmental Protection Agency (EPA) officials may have colluded with Monsanto to help slow the release of the dangers of the pesticide from the public.

According to the documents and testimony, Monsanto apparently asked the government agency to slow down their safety review of the company’s top-selling herbicide, RoundUp. According to the documents obtained through the Freedom of Information Act (FOIA) requests, not only did the government agree to slow the safety review, EPA officials also helped the company by giving them consistent updates. Be healthy. Replay Envoyé spécial - Glyphosate : comment s'en sortir ? - France 2. Pour France Télévisions, le respect de votre vie privée est une priorité. 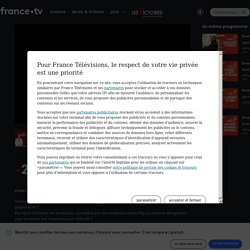 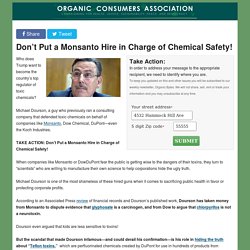 Michael Dourson, a guy who previously ran a consulting company that defended toxic chemicals on behalf of companies like Monsanto, Dow Chemical, DuPont—even the Koch Industries. TAKE ACTION: Don’t Put a Monsanto Hire in Charge of Chemical Safety! When companies like Monsanto or DowDuPont fear the public is getting wise to the dangers of their toxins, they turn to “scientists” who are willing to manufacture their own science to help corporations hide the ugly truth. Michael Dourson is one of the most shameless of these hired guns when it comes to sacrificing public health in favor or protecting corporate profits.  Umweltinstitut München. Monsanto a payé des scientifiques reconnus pour signer des articles qui lui donnent du crédit – La vraie démocratie. Edouard Philippe a travaillé pour un cabinet d’avocats pro-<span class="caps">OGM</span> De 2004 à 2007, Edouard Philippe, actuel Premier ministre, a travaillé dans le cabinet d’avocats Debevoise & Plimpton LLP. 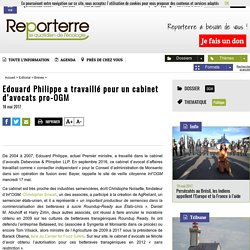 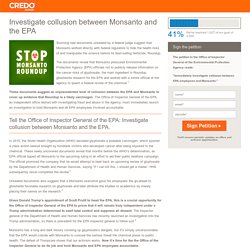 The documents reveal that Monsanto pressured Environmental Protection Agency (EPA) officials not to publicly release information on the cancer risks of glyphosate, the main ingredient in Roundup, ghostwrote research for the EPA and worked with a senior official at the agency to quash a federal review of the chemical.1 These documents suggest an unprecedented level of collusion between the EPA and Monsanto to cover up evidence that Roundup is a likely carcinogen. The Office of Inspector General of the EPA, an independent office tasked with investigating fraud and abuse in the agency, must immediately launch an investigation to hold Monsanto and all EPA employees involved accountable. Thanks for all you do. Friends of the Earth: The Biggest Jobs on Earth. Dear Representative, I’m very alarmed by recent reports that unsealed court documents demonstrate that Monsanto colluded with an EPA official to downplay the impacts of Monsanto’s top selling herbicide glyphosate (a.k.a. 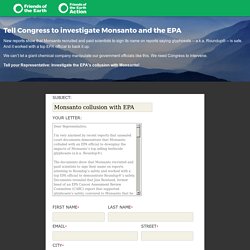 Roundup®). The documents show that Monsanto recruited and paid scientists to sign their name on reports attesting to Roundup’s safety and worked with a top EPA official to demonstrate Roundup®’s safety. Documents revealed that Jess Rowland, former head of an EPA Cancer Assessment Review Committee (CARC) report that supported glyphosate’s safety, conveyed to Monsanto that he would attempt to halt a glyphosate safety review by U.S. Monsanto Dicamba Herbicide. By Dr. 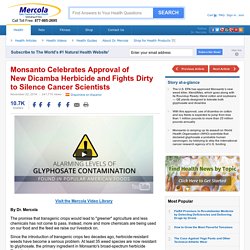 Mercola The promise that transgenic crops would lead to "greener" agriculture and less chemicals has not come to pass. Instead, more and more chemicals are being used on our food and the feed we raise our livestock on. Investigate collusion between Monsanto and the EPA. Stunning new documents unsealed by a federal judge suggest that Monsanto worked directly with federal regulators to hide the health risks of and manipulate the science behind its best-selling herbicide, RoundUp. 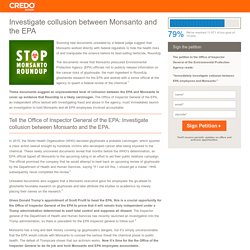 The documents reveal that Monsanto pressured Environmental Protection Agency (EPA) officials not to publicly release information on the cancer risks of glyphosate, the main ingredient in RoundUp, ghostwrote research for the EPA and worked with a senior official at the agency to quash a federal review of the chemical.1 These documents suggest an unprecedented level of collusion between the EPA and Monsanto to cover up evidence that RoundUp is a likely carcinogen. The Office of Inspector General of the EPA, an independent office tasked with investigating fraud and abuse in the agency, must immediately launch an investigation to hold Monsanto and all EPA employees involved accountable. Un rapport sur l'absence de danger des OGM financé par Monsanto - rts.ch - Environnement.

Monsanto is About to Get Away With Poisoning Communities With PCBs. Pull up a chair. 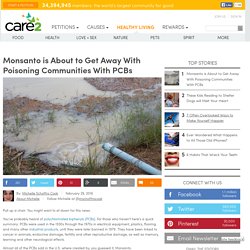 You might want to sit down for this news. You’ve probably heard of polychlorinated biphenyls (PCBs). For those who haven’t here’s a quick summary: PCBs were used in the 1930s through the 1970s in electrical equipment, plastics, flooring and many other industrial products, until they were later banned in 1979. They have been linked to cancer in animals, endocrine damage, fertility and other reproductive damage, as well as memory, learning and other neurological effects.

Almost all of the PCBs sold in the U.S. where created by, you guessed it, Monsanto. Don't Let Monsanto Write the Rules on GMOs! President Obama and the EPA, FDA and USDA will receive a copy of your letter. 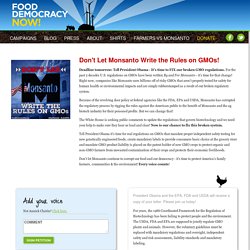 Tell the EPA to Keep Glyphosate off Your Plate! For 20 plus years Monsanto has said that its proprietary weedkiller Roundup and its main chemical ingredient glyphosate were safe. But in the past several years a host of studies have linked Roundup and glyphosate to an alarming number of diseases threatening animal and human health, including obesity, infertility, cancer and Alzheimer’s.

Now officials in the Obama administration’s Environmental Protection Agency are attempting to raise the allowable chemical residue of glyphosate in many important food crops that we eat everyday, including vegetables such as carrots and sweet potatoes and flax and sunflower seeds. It's time to investigate GMOs, Roundup and glyphosate’s impact on human health and the environment and stop working hand in glove with Monsanto to try to raise the residue limits for a chemical that has potentially harmful effects on our health.

Tell President Obama and the EPA that Americans deserve less chemicals on their food not more! U.S. Senate Bars GMO Labels as March Against Monsanto Revs Up. WASHINGTON, DC, May 24, 2013 (ENS) – Two days before thousands of people across the United States plan to march against Monsanto’s genetically engineered crops, the U.S. Senate Thursday turned down a measure that would have allowed states to require labels on food or beverages made with genetically modified ingredients. Sponsored by Senator Bernie Sanders, a Vermont Independent, the amendment to the Farm Bill lost by a vote of 71 to 27.

Senator Bernie Sanders (Photo courtesy Office of the Senator) Co-sponsored by Democratic Senators Mark Begich of Alaska, Michael Bennet of Colorado, Richard Blumenthal of Connecticut and Jeff Merkley of Oregon, the amendment would have made it clear that states have the authority to require the labeling of foods produced through genetic engineering. “An overwhelming majority of Americans favor GMO labeling but virtually all of the major biotech and food corporations in the country oppose it,” said Senator Sanders. Report: 'US government in GM industry's pocket' The diplomatic cables were published two years ago by Wikileaks, and most of them weren't even marked secret.

But now US campaigners Food and Water Watch have collated and analyzed 926 State Department cables (covering 113 countries and five years, from 2005 to 2009) to reveal the extraordinary extent to which the US has been lobbying in support of its biotech industry across the world. Their conclusions were published on Tuesday (14.05.2013). As well as lobbying in the developing world - persuading Kenya to commercialize GM crops and helping the Ghanaian and Nigerian governments to push through lax GM legislation - the US PR campaign was also aimed at legislators in the European Union, where a de facto moratorium has limited the production, import, and sale of most GM crops until now.

Gut punch: Monsanto could be destroying your microbiome. First the bad news: The “safest” herbicide in the history of science may be harming us in ways we’re just beginning to understand. And now for the really bad news: Because too much is never enough, the Environmental Protection Agency just raised the allowable limits for how much of that chemical can remain on the food we eat, and the crops we feed to animals — many of which end up on our plates as well. If you haven’t guessed its identity yet, it’s Monsanto’s Roundup, a powerful weed killer. Christine Lagarde et la firme Monsanto dénoncés par une élue d’Europe Ecologie les Verts.

FBI chases anti-GMO activists while ignoring Monsanto’s transgressions. Some experimental GMO crops were torn out of a field in Oregon this month. That means it’s time for the federal government to freak the fuck out and do its best to clamp down again on eco-activism. The sugar beet plants, which were genetically engineered by Syngenta to survive applications of the herbicide Roundup, were uprooted in the middle of the night from a couple of fields, presumably by anti-GMO activists. The destruction of the experimental crops occurred in the same state where a strain of Monsanto’s illegal herbicide-resistant wheat recently showed up in a farmer’s field, threatening America’s multibillion-dollar wheat export market.