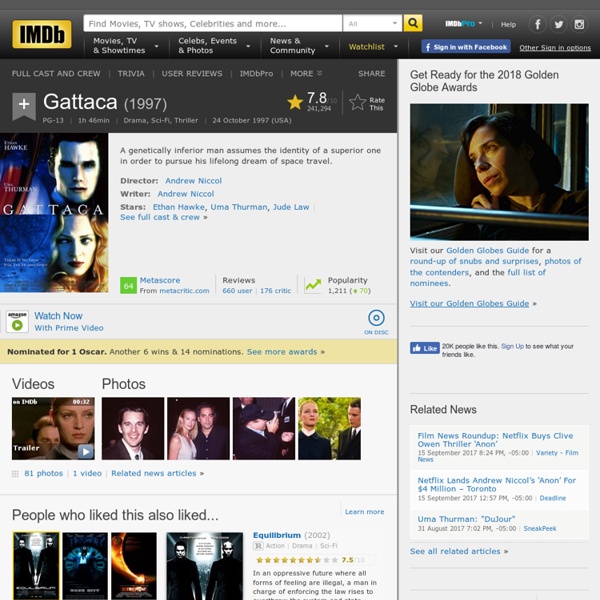 Edit Storyline In the not-too-distant future, a less-than-perfect man wants to travel to the stars. Society has categorized Vincent Freeman as less than suitable given his genetic make-up and he has become one of the underclass of humans that are only useful for menial jobs. To move ahead, he assumes the identity of Jerome Morrow, a perfect genetic specimen who is a paraplegic as a result of a car accident. With professional advice, Vincent learns to deceive DNA and urine sample testing.

Gattaca Gattaca is a 1997 American science fiction film written and directed by Andrew Niccol. It stars Ethan Hawke and Uma Thurman, with Jude Law, Loren Dean, Ernest Borgnine, Gore Vidal, and Alan Arkin appearing in supporting roles. The film presents a biopunk vision of a future society driven by eugenics where potential children are conceived through genetic manipulation to ensure they possess the best hereditary traits of their parents.[1] The film centers on Vincent Freeman, played by Hawke, who was conceived outside the eugenics program and struggles to overcome genetic discrimination to realize his dream of traveling into space. The movie draws on concerns over reproductive technologies which facilitate eugenics, and the possible consequences of such technological developments for society. It also explores the idea of destiny and the ways in which it can and does govern lives.

Grease (1978) Quotes [first lines] Sandy: I'm going back to Australia; I might never see you again. Danny: Don't... don't talk that way, Sandy. Une certaine rencontre (1963) Edit Storyline Angie Rossini is an innocent (Italian Catholic) Macy's salesgirl, who discovers she's pregnant from a fling with Rocky, a musician. Angie finds Rocky (who doesn't remember her at first) to tell him she's pregnant and needs a doctor for an abortion. He finds her a doctor and they work together to raise the money.

First came superweeds; now come the superbugs! The current crop of superweeds plaguing farmers who rely on Monsanto’s RoundUp pesticide represents by now a well documented crisis. But watch out, world! Here come the superbugs. That’s right, Monsanto’s other flagship product, its “Bt” line of genetically modified seeds which emit their own pesticide in the form of a naturally occurring toxin, is now under threat from resistant insects. Fracture (2007) Edit Storyline Wealthy, brilliant, and meticulous Ted Crawford, a structural engineer in Los Angeles, shoots his wife and entraps her lover. He signs a confession; at the arraignment, he asserts his rights to represent himself and asks the court to move immediately to trial. The prosecutor is Willy Beachum, a hotshot who's soon to join a fancy civil-law firm, told by everyone it's an open and shut case.

Monsanto's "Superweeds" Gallop Through Midwest Back in the mid-'90s, Monsanto rolled out seeds genetically engineered to withstand its Roundup herbicide. To ensure huge growth potential, the company shrewdly chose the most widely planted, highly subsidized US crops to grace with its new "Roundup Ready" technology: corn, soy, and cotton. The pitch was simple and powerful: No longer would large-scale farmers need to worry about weeds. All they would have to do was douse their fields with Roundup, which would wipe out all plant life except the desired crop.

The Libertine (2004) Edit Storyline In 1660, with the return of Charles II to the English throne, theater, the visual arts, science and sexual promiscuity flourish. Inception Inception is a 2010 science fiction heist thriller film written, produced, and directed by Christopher Nolan. The film stars a large ensemble cast that includes Leonardo DiCaprio, Ellen Page, Joseph Gordon-Levitt, Marion Cotillard, Ken Watanabe, Tom Hardy, Dileep Rao, Cillian Murphy, Tom Berenger, and Michael Caine. DiCaprio plays a professional thief who commits corporate espionage by infiltrating the subconscious of his targets. He is offered a chance of redemption as payment for a task considered to be impossible: "inception", the implantation of another person's idea into a target's subconscious.[4] Plot[edit] Dominick "Dom" Cobb (Leonardo DiCaprio) and business partner Arthur (Joseph Gordon-Levitt) are "extractors", people who perform corporate espionage using an experimental military technology to infiltrate the subconscious of their targets and extract information while experiencing shared dreaming.

I've Loved You So Long (2008) Trivia The note written by Juliette's dead son, which Lea finds by accident, reads: "un jardin sous la plui sé doux triste come moi san toit maman je veus pas que tu meure jamai on sera ensemble toujour tu ai mon amour ton petit Pierre" (A garden under the rain is sweet sad like me without you Mama I don't want you to die ever. We'll be together always. You are my love. Your little Pierre.) See more »