Research has found that Monsanto’s GMO crops, despite claims to be resistant to herbicides and pesticides, actually require significantly more harsh chemicals. This can only compound the clearly documented damaging health effects already known about GM crops.

“Dr Arpad Pusztai found that rats fed GM potatoes had smaller livers, hearts, testicles and brains, as well as damaged immune systems; they showed structural changes in their white blood cells, making them more vulnerable to infection and disease compared to other rats fed non-GM potatoes. It got worse. Thymus and spleen damage showed up, as did enlarged tissues, including the pancreas and intestines.

There were cases of liver atrophy as well as significant proliferation of stomach and intestinal cells that could be a sign of greater future risk of cancer. Equally alarming was that all this happened after only 10 days of testing, and the changes persisted after 110 days – that’s the human equivalent of 10 years.”

Genocidal Cereal Killer Released. Children of the Corn: GMO Sterility and Spermicides The questions raised by spermicides hidden in GMO corn provided to starving Third World populations are many and profound: 1. 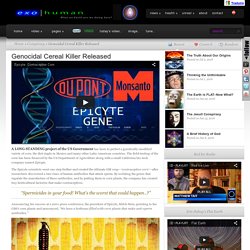 Isn’t GM technology directed beyond third world countries but at all countries in the world, and first and most heavily in the US? 2. Is there a relationship, since the introduction of GM-crops in the US, to how steeply birthrates in the US have fallen? U.S. birthrates overall are at an all time low. 3. Doesn’t keeping GMOs unlabeled undermine in any country in which this is the case, scientists’ capacity to trace them epidemiologically and to investigate their impact biologically?

Teen birthrates in the US are inexplicably plummeting. 4. 5. Doesn’t keeping GMOs unlabeled undermine scientists’ capacity to trace them epidemiologically and to investigate their impact biologically? Untitled. This week, a Standing Committee of plant scientists from 28 member states in Europe is likely to endorse the European Food Safety Authority’s (EFSA) findings so that the European Commission (under pressure from Monsanto, Glyphosate Task Force and others) can re-authorise glyphosate for another nine years. 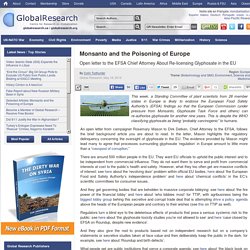 This is despite the WHO classifying glyphosate as being “probably carcinogenic” to humans. An open letter from campaigner Rosemary Mason to Dirk Detken, Chief Attorney to the EFSA, follows the brief background article you are about to read. In the letter, Mason highlights the regulatory delinquency concerning the oversight of glyphosate in the EU. The evidence provided by Mason might lead many to agree that processes surrounding glyphosate ‘regulation’ in Europe amount to little more than a “cesspool of corruption.” 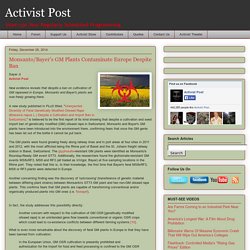 A new study published in PLoS titled, "Unexpected Diversity of Feral Genetically Modified Oilseed Rape (Brassica napus L.) Despite a Cultivation and Import Ban in Switzerland," is believed to be the first report of its kind showing that despite a cultivation and seed import ban of genetically modified (GM) oilseed rape in Switzerland, Monsanto and Bayer's GM plants have been introduced into the environment there, confirming fears that once the GM genie has been let out of the bottle it cannot be put back. GMOs, Monsanto's RoundUp Found in Kellogg's Froot Loops.

Independent DNA lab testing has verified that 100% of the corn in Kellogg’s Froot Loops is genetically modified corn, containing DNA sequences known to be present in insecticide producing Bt and Roundup Ready corn. 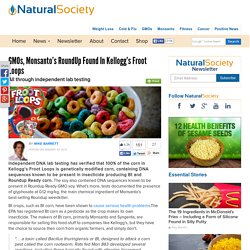 The soy also contained DNA sequences known to be present in Roundup Ready GMO soy. What’s more, tests documented the presence of glyphosate at 0.12 mg/kg, the main chemical ingredient of Monsanto’s best-selling Roundup weedkiller. Bt crops, such as Bt corn, have been shown to cause serious health problems.The EPA has registered Bt corn as a pesticide as the crop makes its own insecticide.

Huge: Monsanto Going to Trial for Crimes Against Humanity. MIT States That Half of All Children May be Autistic by 2025 due to Monsanto. A senior scientist at MIT has declared that we are facing an epidemic of autism that may result in one half of all children being affected by autism in ten years. 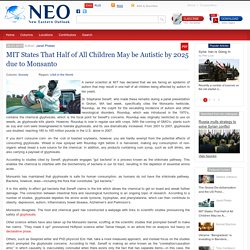 Dr. Monsanto Documentary - This is a shocking video about the company. Monsanto Lobbyist Runs Away When Asked To Drink ‘Harmless’ Pesticide. ​Monsanto in Ukraine: IMF loan for Ukraine may give GMO giant a backdoor into EU — RT Op-Edge. Published time: August 30, 2014 15:33 Reuters / Bogdan Cristel Ukraine’s bid for closer ties with the west could come at a cost. 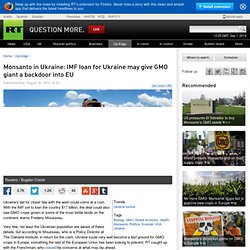 With the IMF set to loan the country $17 billion, the deal could also see GMO crops grown in some of the most fertile lands on the continent, warns Frederic Mousseau. Very few, not least the Ukrainian population are aware of these details, but according to Mousseau, who is a Policy Director at The Oakland Institute, in return for the cash, Ukraine could very well become a test ground for GMO crops in Europe, something the rest of the European Union has been looking to prevent. RT caught up with the Frenchman, who voiced his concerns at what may lay ahead. RT: When this $17 billion deal is approved by the IMF and the Ukrainian ban on GM crops is lifted, does that mean it is just a matter of time before Ukrainian farmers grow modified crops?

FM: We saw in 2013 that Monsanto invested $140 million in new seed plans in Ukraine. Monsanto: Planting Seeds of Death, Disease & Despair! Of all the mega-corps running amok, Monsanto has consistently outperformed its rivals, earning the crown as "most evil corporation on Earth! 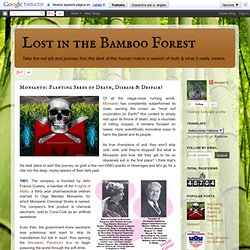 " Not content to simply rest upon its throne of death, atop a mountain of rotting corpses, it remains focused on newer, more scientifically innovative ways to harm the planet and its people. As true champions of evil, they won't stop until...well, until they're stopped! The Monsanto Pandora’s Box Nightmare of GMO Global Genocide: Unleashed and Irreversible. The USDA continues to grant Monsanto further power over itself, despite evidence linking Monsanto’s creations to health conditions and environmental devastation. 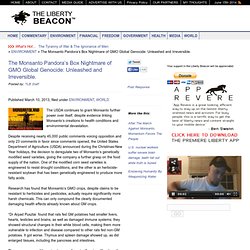 Despite receiving nearly 45,000 public comments voicing opposition and only 23 comments in favor since comments opened, the United States Department of Agriculture (USDA) announced during the Christmas-New Year holidays, the decision to deregulate two of Monsanto’s genetically modified seed varieties, giving the company a further grasp on the food supply of the nation. One of the modified corn seed varieties is engineered to resist drought conditions, and the other is an herbicide-resistant soybean that has been genetically engineered to produce more fatty acids. Research has found that Monsanto’s GMO crops, despite claims to be resistant to herbicides and pesticides, actually require significantly more harsh chemicals.

This can only compound the clearly documented damaging health effects already known about GM crops. Monsanto weedkiller and GM maize in 'shocking' cancer study. The world’s best-selling weedkiller, and a genetically modified maize resistant to it, can cause tumours, multiple organ damage and lead to premature death, new research published today reveals. 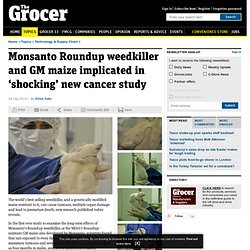 In the first ever study to examine the long-term effects of Monsanto’s Roundup weedkiller, or the NK603 Roundup-resistant GM maize also developed by Monsanto, scientists found that rats exposed to even the smallest amounts, developed mammary tumours and severe liver and kidney damage as early as four months in males, and seven months for females, compared with 23 and 14 months respectively for a control group. “This research shows an extraordinary number of tumours developing earlier and more aggressively - particularly in female animals.

I am shocked by the extreme negative health impacts,” said Dr Michael Antoniou, molecular biologist at King’s College London, and a member of CRIIGEN, the independent scientific council which supported the research. Lost in the Bamboo Forest: Monsanto: Planting Seeds of Death, Disease & Despair!