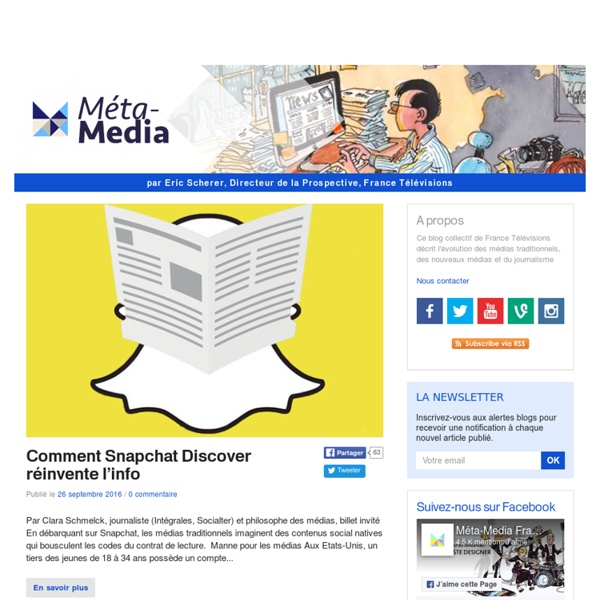 Rapid E-Learning 101 Rapid elearning can mean many things. For some it means easy tools that let you build elearning courses without special programming skills. For others, it means being empowered to quickly share your expertise with others. Ultimately, it’s usually about getting the right information to people at the right time while operating at the speed of business. Rapid E-Learning 101 If you’re just getting started with elearning, this series brings you up-to-speed.

The future of media isn’t about breaking news scoops, it’s about credibility and trust As I was nursing my 50th cappuccino in Perugia during the recent journalism conference there, a small bomb blew up in my Twitter feed thanks to a keynote presentation by Felix Salmon, in which the former Reuters blogger said that the journalistic obsession with scoops is a form of masturbation. Needless to say, there were some shocked reactions to this statement, but I think Felix is right -— even if the metaphor he chose is somewhat unappealing. As he describes in his own post about it, what Salmon said was that “breaking news is the most masturbatory thing journalists do. The reader couldn’t give a flying f*** who broke it.” In other words, the question of who breaks the news about a specific story is largely irrelevant to anyone other than the journalists involved.

Building Scenarios for E-Learning Generally you have two types of courses. Some are all about pushing information out to the learners. And some focus on changing behavior and performance. Both have their roles in the world of elearning. Performance-based courses are easier to assess because you can measure performance before and after. The New York Times' digital challenges, in 5 charts The New York Times’ internal Innovation report, leaked after the unexpected ouster of top editor Jill Abramson, brought to light a newsroom culture out of step with changing consumer reading habits. Here, five charts tell the story of the Times’ struggles as it tightens its embrace of digital media. Digital circulation has been a bright spot for the Times.

PowerPoint for E-Learning To successfully use PowerPoint for rapid elearning, you need to do two things: Rethink how you use PowerPoint. Most people approach it from a linear presentation mindset, building slides the same way they would for face-to-face presentations. That just doesn’t work for elearning.Learn to use PowerPoint’s features. Once you scratch the surface of the tools available in PowerPoint, you’ll see it’s more than adequate for building great elearning. In many ways it’s the ideal choice because it offers a blend of speed, ease-of-use, and cost savings. 'BBC News should learn lessons from Buzzfeed in digital strategy' Buzzfeed has developed a bigger international audience than BBC News and BBC Worldwide BBC News should learn lessons from Buzzfeed to drive a digital presence that is "punching well below its weight", according to a report on the future of its output. The report, commissioned by BBC head of news James Harding from Sir Howard Stringer, also said that the BBC's web presence lacks "character and personality" compared with younger rivals such as Vice Media and Buzzfeed. Stringer, a BBC non-executive director, made the point that in just eight years Buzzfeed has developed a bigger audience than BBC News and BBC Worldwide manages internationally. "Given Buzzfeed, for example, was only founded in 2006, this raises the question of why the BBC's global digital reach is not more significant," said Stringer.

Overdrive Develops Social Learning Infographic for SkillSoft Here at Overdrive, we love to highlight our clients’ successes and the collaborative effort of our team members. We worked with our client, SkillSoft, to develop and launch their Social Learning infographic, now available. This recently completed infographic offers valuable insight into this industry, and expresses the opportunity and benefits of incorporating social learning into organizations. The infographic is complete with live-links, allowing users to gain deeper knowledge on the social learning industry and further engage with SkillSoft and their community.

Q&A: Clark Medal winner Matthew Gentzkow says the Internet hasn’t changed new... The Clark Medal is one of the most prestigious awards in all of academia, awarded to the “American economist under the age of forty who is judged to have made the most significant contribution to economic thought and knowledge.” (Names you might know among previous winners: Paul Krugman, Milton Friedman, Joseph Stiglitz, Steven Levitt, and Larry Summers.) This year’s honor went to Matthew Gentzkow of the University of Chicago’s Booth School of Business. A Global Guide to Tricky Pronunciation English pronunciation is a troublesome thing to master for ESL and EFL students. Those who try to learn without regular auditive stimulation have a particularly difficult time with accurate pronunciation. Plus, some sounds in English just don’t exist in some foreign languages, like the “th” sound. Pronunciation snags happen between many languages. For example, Portuguese-speakers do not understand the sound of “j” that many Spanish-speakers use for the consonant “y.” Most Japanese and Chinese speakers have a hard time with the sound of “ell” coming from any other language, and often confuse it with “ar.”

8 Digital Tools Every Journalist Should Try When Charlie Beckett asked me to join the Polis journalism conference this week at the London School of Economics and Political Science, he showed the depth of his university by asking a surprisingly practical journalism question for a school ranked No. 2 in the world in the research-laden “communication and media studies” field. Beckett wanted to know about the newest digital tools journalists are using to do accountability journalism (which some of us still call watchdog journalism). My first reaction was to mention some of the “golden oldies” Knight Foundation has funded and followed: the encryption software Tor; the investigative paper-tamer Document Cloud and its advanced story-finding cousin Overview; the visual storytelling tool Timeline JS; and the classic crowdmapping application Ushahidi. I say golden oldies because in digital years a lifetime for a product seems like about 21 months. “Moore’s Law” predicted chip-processing power would double about every 18 months. Related

The Idea of Collective Leadership Presented by Dr. Mari Pearlman, with guest Dr. Susan VanZantSponsored by NASSP For the final webinar in the Learner-Centered Leadership 2011 series, we presented an interview with Dr. Susan VanZant, an award-winning California principal and school leadership consultant. Data-driven decision-making is her speciality, and she knows first-hand all of the challenges of moving a school or district to a new way to thinking and acting. Global digital news audience increased by 23% in 2013 Digital news audiences have risen by 23 per cent in the last year, according to the new World Press Trends report, but publishers are not making the most of their increased audience in terms of revenue. Framing the report in the context of the ongoing attacks against journalists around the world – from imprisonment of Al-Jazeera journalists in Egypt to the assault of reporters at protests in Ukraine, Venezuela and Thailand – Larry Kilman, deputy chief executive of WAN-IFRA, said the press was more relevant than ever before. Unless we crack the revenue issue, and provide sufficient funds so that newspapers can fulfill their societal role, democracy will inevitably be weakenedLarry Kilman, WAN-IFRA "In times of political crisis, [why] do those who wish to stifle democracy and free expression immediately summon the newspaper editors, attack journalists, and censor the independent press?" Kilman asked delegates at the 66th World Newspaper Congress in Torino yesterday.

Reading, Writing and New Media Literacies 11.15.11 | Writing at DMLcentral, John Jones argues that teaching students how to write a traditional five-paragraph essay no longer serves a real-world purpose—it’s not a valued skill outside of writing classes. An emphasis should instead be placed on 21st-century literacies, such as writing and publishing information in public spaces: Publishing is a word that for many evokes images of enormous printing presses or the approval of gatekeepers like editors and publishing houses. But in the network society, the publishing process is less guarded, for one can simply post items to the web where others can see them, and comment on or enter into conversations about them. Yet this simplicity masks a complexity: just because it is easy to share our writing on digital networks, that does not mean that the skills necessary to write successfully in different online environments are themselves easily mastered.

The mobile majority: Engaging people on smartphones is the next big challenge to the news Editor’s note: The new issue of our sister publication Nieman Reports is out and ready for you to read, online and in print. There’s lots of great stuff in there as usual, with articles on the state of journalism education, citizen journalism in Turkey, comics journalism, epic poetry (!), and more. I write a column for the print edition of the magazine.