A 2,000-year-old ancient Roman laundromat open to public for first time. In its day, the Fullonica di Stephanus, as it is officially known, was equipped with large baths for rinsing dirty tunics and stone basis for dyeing fabrics. 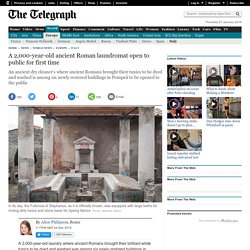 There was a press for ironing and the laundry kept a supply of urine, which was collected in public urinals and then used to get out tough stains. • Ancient Romans 'had perfect teeth' thanks to healthy low-sugar diet Next to the laundry, sat Casa del Criptoportico, a former luxury home with a quadrangular garden which has also been restored. It boasts beautiful mosaics depicting pygmies and four thermal baths decorated with stucco. An enormous covered corridor, known as a cryptoporticus, from which the house derives its name, was built with vast windows to allow light into the next-door sitting room. The laundry is estimated to be 2,000-year-old Photo: D'AURIA La Casa di Paquius Proculus, la Casa del Sacerdos Amandus, la Casa di Fabius Amandio and la Casa dell’Efebo were also unveiled to the public. In bed with the Romans: a brief history of sex in Ancient Rome. Drawing conclusions from literature, ancient graffiti, inscriptions and the visual arts, Chrystal’s latest work, In Bed with the Romans, explores the Roman relationship with sex. 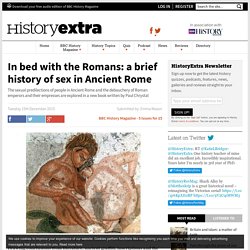 The book describes love and marriage; the role of the wife in the family and in religion (as well as in bed); plus sexual medicine, homosexuality, pornography and pederasty. Here, writing for History Extra, Chrystal briefly explores the history of sex in Ancient Rome… According to Philip Larkin's best-known poem, Annus Mirabilis, 1963 is the year in which sex was invented in Britain. In Ancient Rome, what was the law of the twelve tables? History Extra explains...

As part of our 'History Extra explains' series, leading historians answer the burning questions you were too afraid to ask... 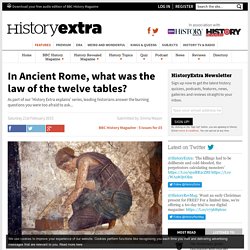 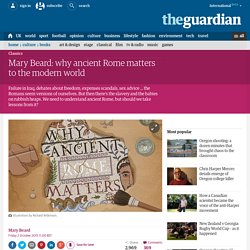 What we often call the “invasions” into the Roman empire of barbarian hordes (or “swarms”, perhaps) could equally well be described as mass movements of economic migrants or political refugees from northern Europe. The Roman authorities had no better idea of how to deal with this crisis than our own authorities do, and, predictably, they were less humane. On one notorious occasion, uncomfortable even for some Roman observers, they sold dog-meat as food to the asylum-seekers who had managed to get across the river (dog was off limits for human consumption then as now). 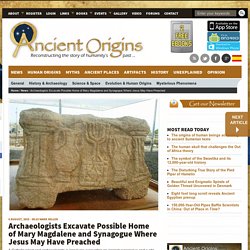 Archaeologists say Jesus could have preached in the temple as he is said in the Gospels to have preached at synagogues in the Galilee and no other synagogue from his lifetime has been found. Six years ago Juan Solana, a Catholic priest, bought some property in the ancient town of Magdala and was required to do exploratory excavations under Israeli law.

By chance he found the ruins of a 1st century AD synagogue. Panorama XXL: Ancient Rome's glory lives on – in Rouen. So, you’ve been to Rouen cathedral, the one painted into submission by Monet. 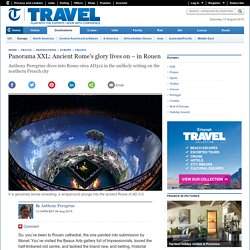 You’ve visited the Beaux Arts gallery full of Impressionists, toured the half-timbered old centre, and tackled the brand new, and belting, Historial devoted to Joan of Arc. Now proceed to the Seine riverbank, to what looks like a gas storage tank, except that it’s blue. The Accidental Suicide of the Roman Empire. – Posted on August 2, 2015Posted in: Videos The Accidental Suicide of the Roman Empire Lecture by Michael Kulikowski Given at Washington and Lee University, on March 2, 2012 Excerpt: Be that is it may, all of these explanations, and hundreds more like them, have in common one fundamental belief: that is whatever happened to the Roman Empire, barbarians from northern Europe had a lot to do with it. 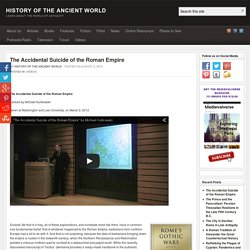 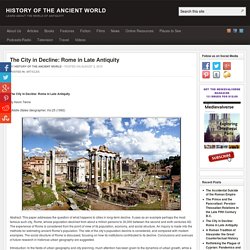 It uses as an example perhaps the most famous such city, Rome, whose population declined from about a million persons to 30,000 between the second and sixth centuries AD. Thank the Ancient Romans for 'Street Food' Grabbing something hot and tasty on the move? 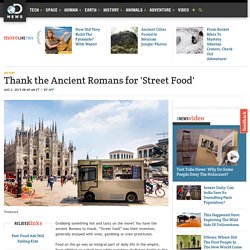 You have the ancient Romans to thank. “Street food” was their invention, generally enjoyed with wine, gambling or even prostitutes. Food on the go was an integral part of daily life in the empire, from nibbling on salted peas while watching gladiators battle in the Colosseum, to grabbing a sausage or fried fish snack after a dip in Rome’s famed baths. Feeding an empire of some 50 million people was no mean feat, as an exhibition in the Italian capital sets out to show in conjunction with Milan’s 2015 Universal Exhibition on the themes of food and agriculture, running until the end of October.

Is Street Food Safer Than Restaurant Food? A typical day kicked off with the jentaculum, or breakfast — salted bread, dried fruit and eggs washed down with milk or wine. The Great Fire of Rome. Of the early Roman emperors, Nero alone rivalled Caligula in his reputation for sheer unbridled viciousness. 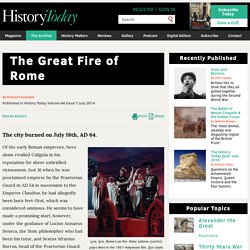 Who was the highest-paid sportsman in history? We are well used to bemoaning footballers’ salaries, or gawping at Tiger Woods’ vast worth, but modern superstars don’t come close to matching the income of history’s highest-paid athlete Monday 7th July 2014 Submitted by: Jonny Wilkes An Italian relief of a chariot racer | © Joanna Zaleska | Dreamstime.com Gaius Appuleius Diocles, a Roman charioteer who retired at the age of 42 after a career spanning 24 years, accrued winnings of 35,863,120 sestertius – or £10 billion in modern money. The Lusitanian (from modern day Spain) entered his first race aged 18 in AD 121, and went on to survive more than 4,200 races.

History, Travel, Arts, Science, People, Places. Hail, Eddie Stobartus: camels were HGVs of Roman Britain. Camels legendarily carried the three wise men across the desert to pay homage to Jesus. Those were the lucky ones. Archeologists have discovered that camel trains possibly came to chilly Britain. New research suggests they may have been used by the Romans to transport their goods across the northern provinces of their empire, including Britannia. A review of camel bones discovered in 22 Roman archeological sites across northern Europe, including one in Britain, found that the animals may also have been used as mascots by Roman soldiers or kept as curiosities by rich landowners.

There is evidence that some were butchered for their meat. Calcata, an Ancient Town near Roma. In the 1960s, the emptied historical centre began to be repopulated by artists and hippies who squatted in its medieval stone and masonry structures. Many of the squatters eventually purchased their homes, the government reversed its condemnation order, and the residents of what had become an artistic community began restoring the ancient town. This trend has continued. Archaeologists reveal more about Roman marching camp found at sports stadium ...

A possible Roman ring© Courtesy York Archaeological Trust The remains of a Roman marching camp, brooches and a possible Roman ring have been uncovered at an excavation in York where archaeologists found narrow “ankle breaker” slits, cuts at the bottom of the ditches to supply drainage and trip attackers. Ahead of Huntington Stadium’s imminent transformation into a community sports facility, a team of volunteers and archaeologist from the York Archaeological Trust spent four weeks investigating the site. The dig exceeded the expectations of project manager Ian Milsted and produced a variety of small finds such as pottery shards and fibulae brooches. It also fulfilled the Trust’s aim to discover the precise purpose of the camp. A partially excavated ditch slot with "ankle breaker"© Courtesy York Archaeological Trust “Long before we broke ground, we hoped to find out whether or not this encampment was a temporary practice camp or a more long-lived marching camp,” says supervisor Arran Johnson.

Per Lineam Valli. There are plentiful resources relating to Hadrian’s Wall that are freely (and legitimately!) Available on the web, mostly PDFs. Breeze, D. J. Jilek, S. and Thiel, A. 2011: Frontiers of the Roman Empire: Hadrian’s Wall, Hexham general introductory account in three languages (English, German, and French). Roman remedies for hot summers.

Posted on 01. Okay, So What about the Historicity of Spartacus? It’s always something. First it was, “We have better evidence for Jesus than for the contemporary emperor Tiberius.” Matthew Ferguson annihilated that one. Will US repeat the welfare death of the Roman Empire? Ancient Tuscan Villa Opens its Doors. Hadrian's Wall frozen in time: New archive catalogues how English Heritage ke... Artist Dawn Felicia Knox with material collected and archived during the conservation of Hadrian's Wall© Courtesy English Heritage. The (Roman) Empire Strikes Back. In Search of a Philosopher’s Stone. By ERIC A. The Stoic Reading List. Steve's Classroom: Mega-update to my mnemonic unit on Greek and Latin roots, ... Gay marriage and homosexuality were part of moral landscape in Ancient Rome.

Ancient Roman frescos 'worthy of Pompeii' found in southern France. 8 More Amazing Ancient Roman Mosaics. How to use Pearltrees. Like being there: Walking through an ancient Roman town. Swans Fat, Crocodile Dung, and Ashes of Snails: Achieving Beauty in Ancient Rome. A Second Triumphal Arch of Titus Discovered. The Long Defeat: The Fall of the Roman Empire in East and West. Spartacus: Combat, backstabbing and lucre in ancient Rome. 8 Ways Roads Helped Rome Rule the Ancient World — HISTORY Lists. Remains of triumphal arch of Titus found in Rome.

They Once Touched Roman Lips by Madeleine Schwartz. Tuesday 26 May – Virtual Rome: a digital reconstruction of the ancient city. Newfound 'Gospel of the Lots of Mary' Discovered in Ancient Text. How the Romans went about their business. Centuries of Italian history unearthed as family digs below toilet in a quest to fix a pipe.