Roman Republic 509–27 BC. Roman Empire 27 BC – 476 AD. Ancient Roman Laws. Since the days of the Law of the Twelve Tables, developed during the early republic, the Roman legal system was characterized by a formalism that lasted for more than 1.000 years. 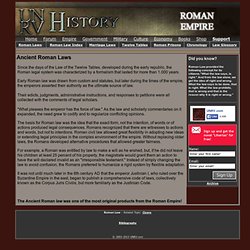 Early Roman law was drawn from custom and statutes, but later during the times of the empire, the emperors asserted their authority as the ultimate source of law. Their edicts, judgments, administrative instructions, and responses to petitions were all collected with the comments of legal scholars. "What pleases the emperor has the force of law. " As the law and scholarly commentaries on it expanded, the need grew to codify and to regularize conflicting opinions. The basis for Roman law was the idea that the exact form, not the intention, of words or of actions produced legal consequences. 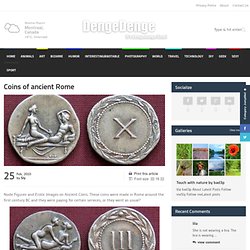 These coins were made in Rome around the first century BC and they were paying for certain services, or they went as usual? Digital Atlas of the Roman Empire. Proverbs, Quotes, and Sayings of Ancient Rome. There are many sayings used in the Roman world which are interesting and fun to know. 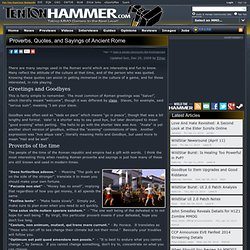 Many reflect the attitude of the culture at that time, and of the person who was quoted. Knowing these quotes can assist in getting immersed in the culture of a game, and for those interested, in role playing. Greetings and Goodbyes This is fairly simple to remember. The most common of Roman greetings was “Salve!” Goodbye was often said as “Vade en pace” which means “go in peace”, though that was a bit lengthy and formal. Proverbs of the time The people of the time of the Roman republic and empire had a gift with words. "Deos fortioribus adesse. " - Meaning "The gods are on the side of the stronger", translate it to mean you should make your own fortune.

" Famous Quotes of The Time "Dulce et decorum est pro patria mori" - by Horace, meaning "It is a sweet and seemly thing to die for ones country". Comment about this article in our forums! The Roman Empire. Or Republic. Or...Which Was It?: Crash Course World History #10. Seven Wonders of Ancient Rome. Rome: Women In Rome (HBO) Roman Army. Punic Wars - Ancient History. Over the next decades, Rome took over control of both Corsica and Sardinia as well, but Carthage was able to establish a new base of influence in Spain beginning in 237 B.C., under the leadership of the powerful general Hamilcar Barca and, later, his son-in-law Hasdrubal. 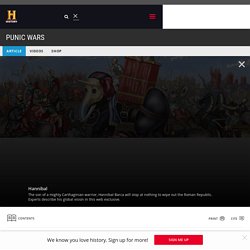 According to Polybius and Livy in their histories of Rome, Hamilcar Barca, who died in 229 B.C., made his younger son Hannibal swear a blood oath against Rome when he was just a young boy. Upon Hasdrubal’s death in 221 B.C., Hannibal took command of Carthaginian forces in Spain. Two years later, he marched his army across the Ebro River into Saguntum, an Iberian city under Roman protection, effectively declaring war on Rome. The Second Punic War saw Hannibal and his troops–including as many as 90,000 infantry, 12,000 cavalry and a number of elephants–march from Spain across the Alps and into Italy, where they scored a string of victories over Roman troops at Ticinus, Trebia and Trasimene. Fall of The Roman Empire...in the 15th Century: Crash Course World History #12. Roman Gods. Christianity.