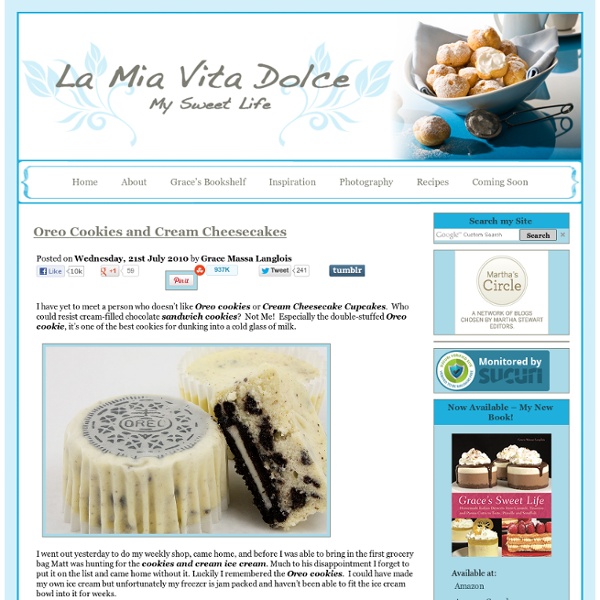 Posted by Grace Massa Langlois on Wednesday, 21st July 2010 I have yet to meet a person who doesn’t like Oreo cookies or Cream Cheesecake Cupcakes. Who could resist cream-filled chocolate sandwich cookies? Not Me! Especially the double-stuffed Oreo cookie, it’s one of the best cookies for dunking into a cold glass of milk. I went out yesterday to do my weekly shop, came home, and before I was able to bring in the first grocery bag Matt was hunting for the cookies and cream ice cream. One of Matt’s favourite desserts of all time is cherry cheesecake and I thought to myself why not Oreo Cookies and Cream Cheesecakes, that should satisfy his craving. Plus these cheesecakes are super easy to prepare, everything comes together in one bowl and there’s no crushing chocolate wafers with a rolling pin, then melting butter, baking the crust first and then baking a second time when filled. Drop an Oreo cookie into each muffin tin, make filling, add chopped cookies, bake, and enjoy, how easy is that?

Pierogi Recipe October 2, 2010 My mom is obsessed with keeping a stocked freezer, but I guess I don’t really take after her, because my freezer tends to be relatively empty, aside from random containers of stock/ramen broth, frozen dumplings and pierogi. I admit, I store buy frozen chinese dumplings and pierogi for those times that I just don’t feel like cooking. I tell myself it’s because of ease and convenience, but really, I just love the taste of frozen pockets filled with deliciousness. Pierogi are fast, tasty, and ideal for when I let myself get too hungry and become a crazy unthinking monster. (This happens more often than you would believe).

King Arthur Flour – Baking Banter - StumbleUpon Love brownies. Love their shiny, flaky top that shatters into micro-thin shards that shower onto your fingers as you eat. Love their dark, gooey center. Their “chocolate nirvana” flavor. Sometimes can’t deal with the bake, wait to cool, cutting into squares messiness and fuss of brownies. Want something I can enjoy within 5 minutes of its exit from the oven. S'mores Cookies These cookies are every bit as delicious as they look. You may have noticed that I have been in a s'mores kick lately. First with the cookie dough pops, then with these cookies. Evil Shenanigans - Baking & Cooking Blog Is there anything better than a well made pound cake? Pound cakes are highly satisfying and wonderfully versatile. I’ve served pound cake for dessert with whipped cream, I’ve served them with fresh berries for breakfast to great acclaim, and nothing beats pound cake for an after work/school snack. Pound cake can also be the base for other desserts, like my favorite holiday treat, trifle!

20 Hand Picked Tremendous Modern Gothic Fonts Gothic fonts most often are referred as Ancient and Out-Dated fonts but in this modern era there are designers who are very interested in Gothic Category of fonts. They have added Modern touch in these old-styled fonts which makes them more elegant and beauteous. From the mash-up of irregularity and slanted ascender serifs, contrast of light and heavy strokes of original gothic fonts and regular shape and hairline serifs with heavy downstrokes of modern fonts, we can always expect extra ordinary result. 1.

Frozen Banana Bites Planning to try this recipe? Be sure to check out the new Banana Bites FAQs post answering some of the most frequently asked questions for the best results and fun variations! I'm the kind of person who cannot go through even one day without consuming at least two servings of chocolate. OK. Craft Blog / How To Make A Rainbow Cake! by COLOURlovers So I did mention something about health and/or diet food in my last post, and while this recipe is the latter, it is most certainly not to be confused with the former. The cool thing is that if you’re making something so distractingly colourful, people will think it’s delicious no matter what. This presents me with the option to use an old Weight Watchers trick—the one-point cupcake. Except I’m making a cake and I created my own frosting. Kinda. I’ve seen it done before, but I swear I made it up first!

Snickerdoodle Muffins Snickerdoodle Muffins I have been obsessed with Pinterest lately! Pinning this and that all while trying not to drool all over my computer. While I like pinning lots of different things, as you can imagine, I love pinning recipes. Teabags! Perfect cookie for a Tea Party! For my boss's birthday I made these shortbread tea bags... I was inspired when I saw some wooden tea bags as part of a kid's play food set - I thought hmmm one day I could do shortbread dipped in chocolate! I made little tags with cupcakes and used embroidery thread. I used a round icing tip to punch a little hole in each one before I baked so that I could thread it later. ps... shortbread recipe from: Source

AZ Cookbook - Food From Azerbaijan & Beyond » Chocolatiest Crinkles A brief description of these cookies – they are darn good! They are chewy on the inside and crisp on the outside. Beware, they disappear fast. At least that’s the case in our cookie monster filled family. On another note, I am feeling darn good too, because Azerbaijan won first place in Europe’s most popular song contest – Eurovision! 2 Stews: 1-2-3 Chocolate Microwave Mug Cake Calling all Chocoholics! I will stop at nothing to bring you a fix! Last month I received an email "forward" from my brother-in-law with a recipe for a 5 Minute Chocolate Microwave Mug Cake. My first reaction as a long time baker was suspicious, but the concept was intriguing. The recipe kept buzzing around my head and I thought, what the heck, I'll just try it. My suspicion came back and I wanted opinions first, so I "googled" it.