Making French Macarons: Instructions & Recipes. It seems like there’s a wave of macaron questions that are sweeping my way. 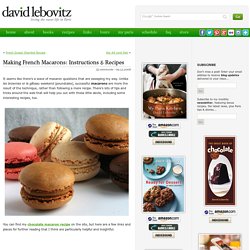 Unlike les brownies or le gâteau weekend (poundcake), successful macarons are more the result of the technique, rather than following a mere recipe. There’s lots of tips and tricks around the web that will help you out with these little devils, including some interesting recipes, too. Rainbow frosting in Decoration stuff for cupcakes and muffins. Rainbow French Macarons - with yoyomax12. Ice Cream Sundae Style Buttercream Frosting. Caramel-Mocha-Sea Salt Cupcakes Recipe. Mingmakescupcakes.yolasite.com. Vanilla Vanilla Cupcakes.

Cracked Pepper, Mint and Strawberry Macarons - And Tartelette Goes To Japan. Update: I am not going to Japan...I just went there virtually through a magazine article. 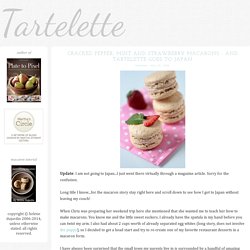 Sorry for the confusion. Long title I know....for the macaron story stay right here and scroll down to see how I got to Japan without leaving my couch! When Chris was preparing her weekend trip here she mentioned that she wanted me to teach her how to make macarons. You know me and the little sweet suckers, I already have the spatula in my hand before you can twist my arm. I also had about 2 cups worth of already separated egg whites (long story, does not involve the puppy), so I decided to get a head start and try to re-create one of my favorite restaurant desserts in a macaron form. I have always been surprised that the small town my parents live in is surrounded by a handful of amazing small restaurants. The menu was creative and all the dishes described perfectly so that all our senses awaken...ah the wait was going to be tough.

French Macarons A Tutorial IronWhisk. This is a tutorial for French macarons (also known as macarons), not for macaroons. 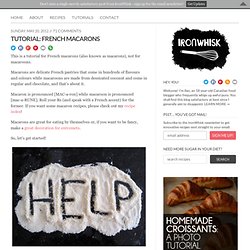 Macarons are delicate French pastries that come in hundreds of flavours and colours while macaroons are made from dessicated coconut and come in regular and chocolate, and that’s about it. Macaron is pronounced [MAC-a-ron] while macaroon is pronounced [mac-a-RUNE]. Raspberry and dark chocolate macarons honeyandsoy food adventures. Turkish Delight Macaroons ∙ Recipe by Cat Morley on Cut Out. Happy Chinese New Year. As Chinese New Year approaches, you’ll see a flurry of activities in every Chinese household. 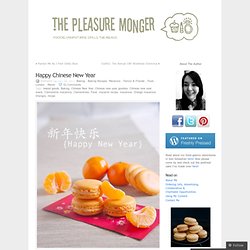 We spring clean to rid of ill-fortune and welcome good luck. We deck our homes in red and gold, both auspicious colours for the Chinese, to celebrate the most important traditional Chinese festival. We cook, we bake, we feast and we grow fat with our dear family and friends, all in the name of the new year. It is a time to gather with loved ones, particularly so on the eve of the Chinese New Year when we have reunion dinners with our families. It is a time when we say, out with the old, in with the new.

As we bid farewell to the Year of the Tiger and give a warm welcome to the Rabbit, we find ourselves somewhat wedged in no man’s land for Chinese New Year. Although our home severely lacks decorations, we are on our way to putting up three miserable couplets that we bought years ago. With this in mind, I thought it might be interesting to put a twist in the traditional Chinese New Year snacks. Blood Orange Macarons - Je suis alimentageuse. Cafe Johnsonia: Cashew Dulce de Leche French Macaron Recipe. Before we talk about how glorious the flavors are in this Cashew Dulce de Leche French Macaron recipe, we need to talk about macarons. 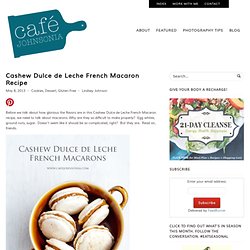 Why are they so difficult to make properly? Egg whites, ground nuts, sugar. Doesn’t seem like it should be so complicated, right? But they are. Read on, friends. Fleur de sel caramel macarons honeyandsoy food adventures. A La Cuisine!: Macarons (IMBB 10) I have never been to Paris, but when I eventually go there someday, I plan to visit the renowned pâtisseries of Pierre Hermé and Ladurée to try out all their macarons. 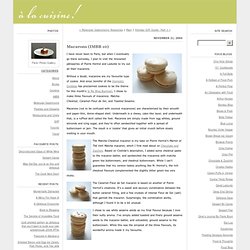 Without a doubt, macarons are my favourite type of cookie. And since Jennifer of the Domestic Goddess has proclaimed cookies to be the theme for this month's Is My Blog Burning? , I chose to make three flavours of macarons: Matcha-Chestnut, Caramel-Fleur de Sel, and Toasted Sesame. Macarons (not to be confused with coconut macaroons) are characterized by their smooth and paper-thin, dome-shaped shell. Underneath is a chewy, cake-like layer, and underneath that, is a ruffled skirt called the feet. Matcha Green Tea Macarons IronWhisk. Matcha, if you have never heard of it before, is a strikingly coloured green tea powder from Japan. 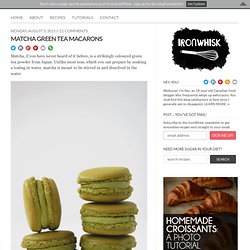 Unlike most teas, which you can prepare by soaking a teabag in water, matcha is meant to be stirred in and dissolved in the water. Matcha is a little bit like hot chocolate mix, except much greener and without the taste of hot chocolate. I guess the only similarity really is that both powders are soluble in water. This was my first time tasting matcha, and it was quite enjoyable. Thai Tea Macarons with a Thai Tea Infused White Chocolate Ganache (Italian Meringue Recipe) I just love the taste of Thai tea. 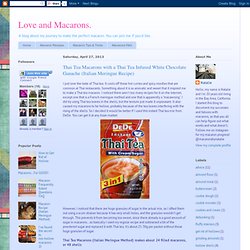 It cools off those hot curries and spicy noodles that are common at Thai restaurants. Earl Grey Macarons with Cream Cheese Frosting. French macarons are finicky little guys. 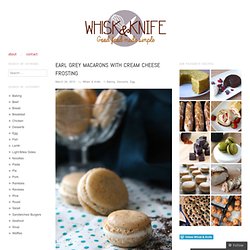 Made with only four simple ingredients, it took three tries over the span of two weeks to finally get the perfect crisp-chewy shell with little feet, and MAN, was I elated. No more hiding those deformed, cracked shells at the back of the fridge (I snuck them in for a midnight snack). HUZZAH. So, these are French macarons; and generally speaking, there are two methods of making these: French meringue, and Italian meringue. The latter involves making a sugar syrup and adding it to the beaten egg white gradually, whipping the entire thing to form glossy smooth peaks, whereas the former is the traditional style of beating egg whites with sugar to stiff peaks. Lavender Cupcakes with Honey Frosting. Before talking about these cupcakes, I need to tell you that I have just created a Facebook page for this blog, as well as a Twitter. 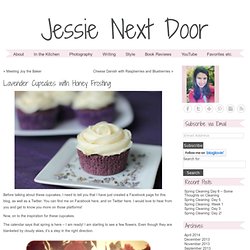 You can find me on Facebook here, and on Twitter here. I would love to hear from you and get to know you more on those platforms! Now, on to the inspiration for these cupcakes. The calendar says that spring is here – I am ready! Eiffel Tower Cupcakes. Salted Caramel Vegan Cupcakes. Moist Chocolate Cupcakes with Oreo Cream Cheese Frosting. I went to a friend’s baby shower this weekend. She’s 6 weeks ahead of me, and having a boy, too! I made cupcakes. Chocolate cupcakes, with Oreo cream cheese frosting. As far as cravings go, mine have been fickle and transient. (Potatoes were the only itch that just could not be scratched.) This week was Oreos. THE Best Strawberry Cupcake Recipe. These delectable cupcakes will melt in your mouth. Serve these delicious STRAWBERRY CUPCAKES at your next party, social, family dinner, gathering or celebration!