Woman quit job to run £1m cupcake firm Rachael's Kitchen. A mother-of-one has revealed how she built a single cupcake stall into a nationwide business with a £1million turnover. 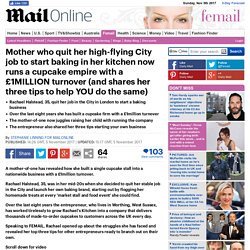 Rachael Halstead, 35, was in her mid-20s when she decided to quit her stable job in the City and launch her own baking brand, starting out by flogging her homemade treats at every 'market stall and food event' she could find. Over the last eight years the entrepreneur, who lives in Worthing, West Sussex, has worked tirelessly to grow Rachael's Kitchen into a company that delivers thousands of made-to-order cupcakes to customers across the UK every day. Speaking to FEMAIL, Rachael opened up about the struggles she has faced and revealed her top three tips for other entrepreneurs ready to branch out on their own. Scroll down for video. Completely Retail. CR HS 60541 1 Cornhill Dorchester brochure 1. If my company is valued at 1M and an angel wants to invest 100k, how much equity does he/she get? - Quora. Best Text-to-Speech Demo: Create Talking Avatars and Online Characters. Free text to speech with Naturally Sounding Voices. 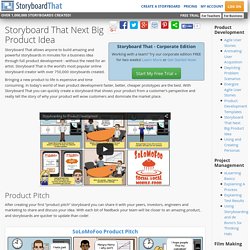 Try our corporate edition FREE for two weeks! Learn More or Get Started Now! As more and more people choose to become self-employed an important decision is the structure the new business should take. 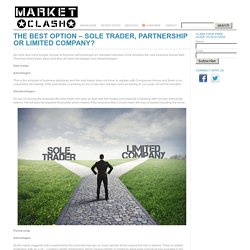 There are three basic types and they all have advantages and disadvantages. Setting up a limited company: How to issue shares. When you’ve come up with a killer business idea, you’ll be itching to get your start-up off the ground as quickly as possible. 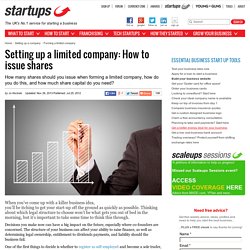 Thinking about which legal structure to choose won’t be what gets you out of bed in the morning, but it’s important to take some time to think this through. Decisions you make now can have a big impact on the future, especially where co-founders are concerned. The structure of your business can affect your ability to raise finance, as well as determining legal ownership, entitlement to dividends payments, and liability should the business fail. One of the first things to decide is whether to register as self-employed and become a sole trader, form a partnership or set up a limited company or limited liability partnership.

For more on what each of these structures involves, the pros and cons of each and what your respective duties and obligations are, read our guide on how to choose the right legal structure for your start-up. A guide to limited company shares. Shares are portions of ownership in a private company limited by shares. 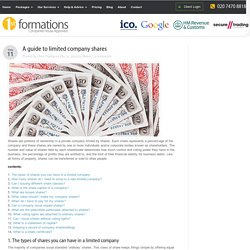 Each share represents a percent-age of the company and these shares are owned by one or more individuals and/or corporate bodies known as shareholders. The number and value of shares held by each shareholder determines how much control and voting power they have in the business, the percentage of profits they are entitled to, and the limit of their financial liability for business debts. Like all forms of property, shares can be transferred or sold to other people. contents: 1. 1. The majority of companies issue standard ‘ordinary’ shares. What do limited company shareholders do?

Shareholders are the beneficial owners of limited companies. 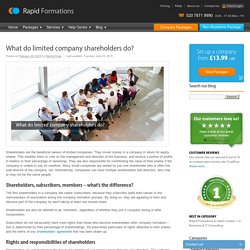 They invest money in a company in return for equity shares. This enables them to vote on the management and direction of the business, and receive a portion of profits in relation to their percentage of ownership. They are also responsible for contributing the value of their shares if the company is unable to pay its creditors. Many small companies are owned by just one shareholder who is often the sole director of the company, too. How many shares do I need to issue at time of company formation? Private companies limited by shares must issue at least one share per shareholder when they are incorporated with Companies House. 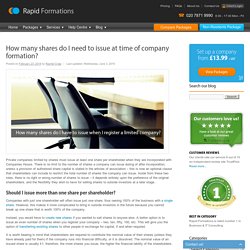 There is no limit to the number of shares a company can issue during of after incorporation, unless a provision of authorised share capital is stated in the articles of association – this is now an optional clause that shareholders can include to restrict the total number of shares the company can issue. Aside from these two rules, there is no right or wrong number of shares to issue – it depends entirely upon the preference of the original shareholders, and the flexibility they wish to have for selling shares to outside investors at a later stage. Should I issue more than one share per shareholder?

Companies with just one shareholder will often issue just one share, thus owning 100% of the business with a single share. I need partners to help my company launch. How many shares and/or how much profit do I offer to get them? — Clarity. Resources. Introduction Selling shares in your company is one way of raising long-term finance for your business. 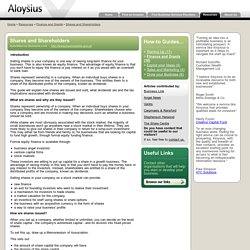 This is also known as equity finance. The advantage of equity finance is that you don't have to repay the finance or pay interest on it as you would with an overdraft or bank loan. Build a Business From Your Kitchen Table - Sophie Cornish, Holly Tucker - Google Books. John Lewis of Hungerford: Cupcakes. Market Study Survey for Cupcake Shop in Brandon - Brandon, Manitoba Discussion. 10 advantages a limited company has over sole trader status. Although the sole trader route, which is commonly referred to as being self employed, is the most popular way of running a business in the UK, there are significant advantages of operating as a limited company.Setting up as a sole trader is without doubt the simplest way to start a business. 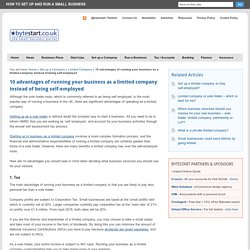 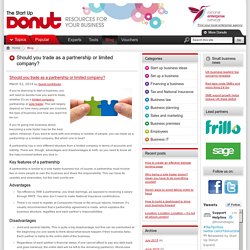 If you’re planning to start a business, you will need to decide how you want to trade, whether it’s as a limited company, partnership or sole trader. This will largely depend on how many people are involved, the type of business and how you want it to be run. If you’re going into business alone, becoming a sole trader may be the best option. Set up and run a limited partnership. Groupon demand almost finishes cupcake-maker. When Surprising Problems Threaten Business, Get Creative To Protect Your (Tiny, Delicious) Product.

Editor's Note: This story contains one of our 10 Best Business Lessons of 2013. For the full list, click here. Take a trip to one of the 10 Baked By Melissa locations in New York City and you will find cupcakes. Hundreds upon hundreds of delicious, miniature cupcakes. But like any new business idea, the miniature cupcake trade came with its own set of unexpected challenges. Ajax Cakes and Cupcakes. Original Cupcakes by Heather & Lori. Cupcakes saved my home! How I cooked up a plan to bake my family out of bankruptcy. By Antonia Kime Updated: 09:23 GMT, 18 February 2010 Beating the recession: Antonia Kime, saved her home from repossession by selling cup cakes My local jeweller looked at me with pity and asked me if I was sure I wanted to do this.

I looked down at the Rolex and engagement ring in my palm. The watch had been the first proper present I'd been given by my husband; the three single one-carat diamonds of my engagement ring had not left my hand in my 12 years of marriage. 'I have no choice,' I said before handing them over. After months of financial struggle, our perfect home of 12 years in Bury St Edmunds, Suffolk, a house that we had built ourselves, was to be taken away from us. Heaven is a Cupcake. Start a Cupcake Business. Free Clip Art & Vector Art At Clker.

Cupcakes, Bespoke & Birthday Cakes London. Two Little Cats Bakery. How to start a cake-making business. Queen of the cupcakes: Laura bakes her way to success with chocolate creation. About Cookies We want you to enjoy your visit to our website. That's why we use cookies to enhance your experience. By staying on our website you agree to our use of cookies. More info about cookies. Forgotten password/Forgotten email Or sign in with Facebook @bournemouthecho All the latest news and chat from the Echo. National Cupcake Week - Home. Rosie Simons Graphic and Surface Design: National Cupcake Week. You may or may not be aware that this week is National Cupcake Week so I thought I'd share some cupcake related work today. I have just finished working on a project branding Andrea's Cupcakes and Andrea's Cupcake Parties. The client wanted me to design the logo so it worked for both Andrea's Cupcakes - cupcakes for occasions and Andrea's Cupcake Parties - cupcake decorating parties and could work on pink or white background..

I then designed business cards and stickers for the cake boxes (which I featured a while ago) from Moo. I took advantage of their printfinity option on business cards and printed different photographs of Andrea's Cupcakes on the backs of the business cards with the logo and contact details on the front. A sweet Selfridges deal for cup cake entrepreneur. Life is sweet for entrepreneur Sarah Wilson-Gibbons who is launching her first concession at up-market department store Selfridges in the intu Trafford Centre. Local entrepreneur finds sweet success with Cupcake stores. It’s a sweet gig if you can get it. Is the cupcake taking us out of recession? By Ruth Tierney for The Mail on Sunday Published: 00:01 GMT, 31 March 2013 | Updated: 19:01 GMT, 2 April 2013.

How Do Cupcake Shops Work? The Real Cost of Cupcakes - The Aubergine Chef. I get it. You’re in a cupcake boutique and think, “This looks fun and easy! Cupcake Shops, Cupcake Bakery and Georgetown Cupcakes. 7 Business Lessons From Gourmet Cupcakes. Businessinsider. Courtesy of Gigi ButlerGigi Butler, founder of Gigi's Cupcakes. Gigi Butler was a cleaning lady with just $33 to her name when she opened her first cupcake shop in Nashville, Tennessee, almost seven years ago. "People thought I was crazy, and they laughed at the idea," she told Business Insider.

Made with love in Birmingham. About Us - A Little History to the Origin of the Cupcake Cafe & Bakery! Cupcakes - The Little Cupcake Company. Ms Cupcake. Crumbs & Doilies Cupcakes: the finest cupcakes and cakes in London. Home - Buttercup Cake Shop. Lola's Cupcakes. Originally taking orders in their bedrooms and baking in their parent's kitchens, the orders soon started flooding in and they had to move production to a commercial bakery in Primrose Hill.

With their love for baking and passion for the finest, fresh ingredients the company grew from strength to strength. With concessions in Harrods, Selfridges and Topshop, a flagship store in Mayfair and booming online store the name LOLA's became synonymous with style and quality. In December 2011 Romy and Victoria decided to pursue other projects and the company was taken over by Asher Budwig.

Fourth-generation baker, Asher was born into a family of sweet-toothed entrepreneurs, Asher grew up watching his father Mario establish and run the hugely successful Millie’s Cookies chain, which grew to over 100 stores across the UK. Mario in turn was inspired by his mother and grandmother, who ran a patisserie and café since the 1940’s back in Colombia, South America. Cupcakes Take The Cake: A Little Cupcake History.