One Bowl Vanilla Cupcakes For Two 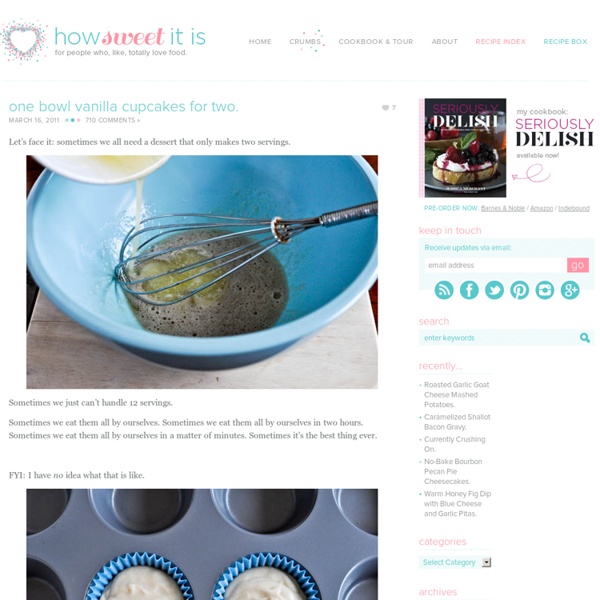 Chocolate Cupcakes with Flaming Strawberries Call me easily amused, but these little torch-topped cupcakes delight me. Besides being a cute novelty item for a party, I think they would add a little drama to the end of a romantic meal. I've been looking for something different to serve for Valentine's dessert, and this is definitely different. The strawberries are hollowed out and filled with a bit of liquor, then ignited with a match. For the cake portion, I chose a One Bowl Chocolate Cupcake recipe because 1. it's quick 2. it is easy, and 3. it fits my prerequisite for a light ending on date night.

root beer float cupcakes It never takes long into the first hot week of the summer for me to get swept up in some sort of dorky nostalgia for a time or place I never knew, in this case, Main Street, U.S.A. with its drugstore soda counters counters, elaborate marble and stainless steel fountains manned by soda jerks serving five cent Cherry Cokes and root beers to bright-eyed youths that always said things like “Sir” and “Ma’am”. Of course, modern times call for modern formats, don’t they? Something you can pack up and bring to a barbecue or picnic? Thus I quickly became consumed with the idea of turning a root beer float into a cupcake; what I struggled to work out were the logistics. I started with a root beer cupcake, which was actually a chocolate root beer cupcake, adapted from the Root Beer Bundt Cake in one my favorite cookbooks that I so, so eagerly anticipate the follow-up to this fall, Baked. I was hoping it would make a dozen cupcakes.

Pepperoni Pizza Puffs Recipe TGIF, friends. Hope that you all have had a lovely week, and that a relaxing weekend lies ahead. I’m looking forward to some friend’s-birthday-celebrating, farmers-marketing, coffee-(friends)-dating, cake-baking, church-enjoying, and sleeping-inning here in my little corner of the world this weekend. Chocolate Chip Cupcakes with Cookie Dough Frosting These cupcakes are a spin off of the popular cookies and cream cupcakes, which I am still having dreams about. Dreams so vivid, that I can taste them in my sleep. Or . . . maybe that is just the cookies I was eating in bed.

Handle the Heat » White Chocolate-Macadamia Nut Cookie Dough Blondies I hope you’re still enjoying my new site design! Today’s recipe actually comes from The Cookie Dough Lover’s Cookbook which was written by Lindsay, the same woman who designed my website. When the book arrived at my house from Amazon, I practically drooled over every page. I had such a hard time selecting a recipe to try out first because they all looked so ridiculously good. chocolate souffl&233; cupcakes with mint cream I’m clearly some sort of grinch, because when I think of flourless chocolate cakes I imagine giant discs of truffle so dense and overly rich that even a sliver of somehow feels excessive, the kind of throwaway dessert restaurants bust out when they’ve got no better ideas. “Add a couple out-of-season, eerily red raspberries and a tuft of whipped cream from a can and it will, without fail, sell,” I imagine sinister managers instructing kitchen staff. Like I said, I’m a total pill. However, when the same flourless chocolate cake is treated like a soufflé — eggs separated, yolks beaten until ribbony and whites whipped until weightless, then gently folded in — and then placed anywhere in my proximity, all bets are off. Because what it does is magical; what was once weighted is lifted off the plate. The top puffs and shatters a little, like a meringue, a meringue with butter.

Ingredients of a 20something: Cookie dough cupcakes, peanut butter chocolate cookies and cake pops It seems like the farther I get away from college (and the more free time I have...there's a connection), the more I get into movies. Which is why Oscar season is exciting. I saw The Artist a couple days after the Best Picture nominees were announced, and I have to say, it's totally great. For a silent film, it uses sound masterfully.

Martha Stewart's Cookies and Cream Cheesecakes Recipe Posted by Grace Massa Langlois on Wednesday, 21st July 2010 I have yet to meet a person who doesn’t like Oreo cookies or Cream Cheesecake Cupcakes. Who could resist cream-filled chocolate sandwich cookies? Not Me! Especially the double-stuffed Oreo cookie, it’s one of the best cookies for dunking into a cold glass of milk. I went out yesterday to do my weekly shop, came home, and before I was able to bring in the first grocery bag Matt was hunting for the cookies and cream ice cream.

Chocolate Cupcakes For 2 I have a strange relationship with sweets. I’m kind of obsessed with making them, but I’m not really that much into eating them. I don’t have a big sweet tooth (I’ll take wine and cheese over cookies almost any day of the week).