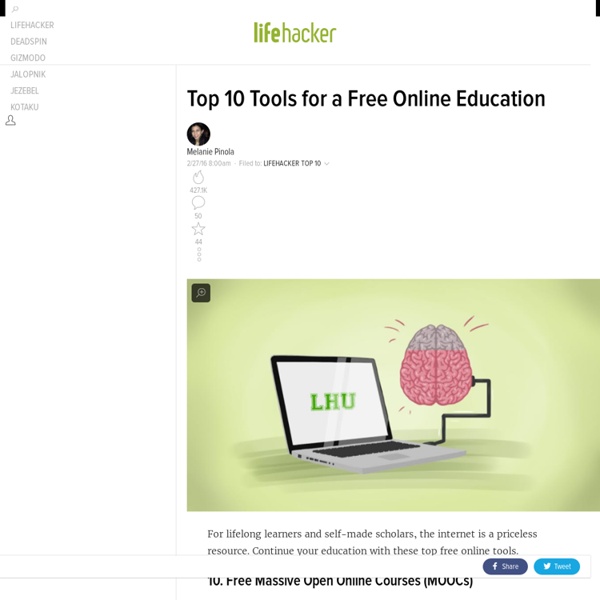 SExpand It's easy to forget these days that the internet started out as a place for academics and researchers to trade data and knowledge. Recapture the web's brain-expanding potential with these free resources for educating yourself online.P Photo by Sailor Coruscant.P 10. Teach yourself programmingP Coding, whether on the web or on the desktop, is one of those skills you'll almost never regret having. 9. "MBA programs don't have a monopoly on advanced business knowledge: you can teach yourself everything you need to know to succeed in life and at work." 8. Too often, newcomers to Ubuntu, the seriously popular Linux distribution, find that their questions about any problem great or small is answered with a curt "Search the forums," or "Just Google it." 7. Nobody's pretending you can talk like a local without some immersion experience. 6. 5. We have to guess that having a giant, searchable database of free academic lectures was just too good an idea for two different web firms to pass up.

20 Health Benefits of Turmeric Last updated on September 4, 2015 Over the years, researchers have been learning more and more about the health benefits of turmeric and its active component, curcumin. It’s been eight years since we first published the 20 Health Benefits of Turmeric and I decided that it’s time for an update with links to the latest studies. Turmeric has been used for over 2500 years in India. The health benefits of turmeric have been slowly revealing themselves over the centuries. Long known for its anti-inflammatory properties, recent research has revealed that it can be helpful in the treatment of many different health conditions from cancer to Alzheimer’s disease.

“Extremely inappropriate”: The Supreme Court and the sneaky plot to kill affirmative action Earlier this week, the Supreme Court heard oral arguments for Fisher v. University of Texas at Austin, a case that, many experts say, could lead to the destruction of affirmative action at public universities as we know it. Even if you’re not much of a Court-watcher or civil rights buff, you probably saw something about it in the news; it was during oral arguments that Justice Antonin Scalia wondered aloud if African-American students might be better served on “a slower track.” As the New Republic’s Brian Beutler observed, Scalia’s comment wasn’t quite as bad as you may think (it wasn’t good, mind you, but it wasn’t as bad as some of his critics have suggested).

Turmeric for Arthritis Treatment Arthritis is a pain or inflammation that commonly occurs in the fingers, elbow, hips jaw, knees, or any other place where a joint present between bones. There is no cure for it especially for rheumatoid arthritis which is a chronic autoimmune disease that causes the body’s defense system to attack itself particularly affects the joints and soft tissues. Arthritis results in the swelling, redness, pain, joint destruction and at last disability. Turmeric is a bright yellow spice belongs to ginger family that has been used for health, beauty and cooking purpose from many centuries in India, China and other countries. It is used as traditional medicine to treat many varieties of ailments including reduction of arthritis and its inflammation, etc. especially the root and rhizome or underground stem are used for medicinal purpose. Here in this article, you came to know how turmeric is used in treating the arthritis and its pain.

The Dark Web and the Power of Anonymity  Have you heard of the Dark Web? What about the Darknet or TOR? If not, this is the growing, underground web that you will be learning a lot more about in the near future. Supreme court ruling against affirmative action would be 'devastating' – activists In late 2013, student frustration at the University of Michigan over the decline in the school’s black student population boiled over, when activists launched the “Being Black at the University of Michigan” (BBUM) campaign. Black enrollment at the institution has dropped from 7% in 2006 to about 4.5% this year. And despite race-neutral efforts to recruit minorities, African American students on campus say the school’s recruitment of minorities has fallen short since the state banned affirmative action through a ballot initiative in 2006. As the US supreme court considers a challenge to the use of race in admissions Wednesday, academics and experts are pointing to the University of Michigan as an example of the challenges of admissions without consideration of race. The case the justices will hear Wednesday involves a years-long challenge by Abigail Fisher, a white student from Texas who was denied admission to the state university’s Austin campus in 2008.

Henry James and H.G. Well’s Famous Feud About Writing, the Purpose of Art, and the Usefulness of Literature “What art does is to coax us away from the mechanical and towards the miraculous,” Jeanette Winterson wrote in 2006. A century earlier, two of literature’s most revered titans clashed on this question of what art does, and the debris became the soil in which nearly every contemporary debate about the purpose of creative work grows. Henry James (April 13, 1843–February 28, 1916) and H.G. Wells (September 21, 1866–August 13, 1946) were a generation apart, but had much in common — both championed freedom of speech, had strong political views, and wrote incisive social commentary; both were nominated for the Nobel Prize several times but never won. Could Slack Be the Next Online Learning Platform? In 2013, Richard Saller, dean of Stanford’s School of Humanities and Sciences, argued that teaching the humanities online was nearly impossible. “The humanities have to deal with ambiguity [and] with multiple answers,” he said, “My hunch is that the kinds of platforms that are available now can provide a forum for exchange among students with different ideas, but I doubt that that will come anywhere near the quality that we have in our introductory seminars.” He had thrown down the gauntlet. Several professors took up Saller’s challenge and piloted ways to capture small group discussion in an online format.

The Nature of Vitamin C There are a surprising number of well-intentioned people among the alternative medical community who now believe that ascorbic acid isn't the real vitamin C. The dietary substances which causes scurvy when missing and cures scurvy when present is by definition vitamin C. Linus Pauling was unequivocal in his belief that the ascorbate fraction of ascorbic acid (called the ascorbate ion) is vitamin C. Referring to scurvy in his landmark Vitamin C and the Common Cold (1970), Pauling stated, "Ascorbic acid is an essential food for human beings. People who receive no ascorbic acid (vitamin C) become sick and die."