Theories for the digital age: Connectivism 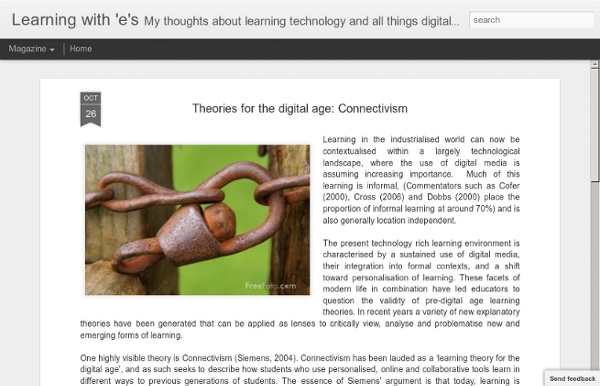 Digital Citizenship: It’s More Than a Poster! Let me begin with a huge disclaimer.. These posters are not intended to substitute for true, open and honest discussions with kids, nor are they meant to replace the daily modeling that should be taking place in showing kids how to be a great digital citizen through our own actions. I’ve always been open with students. Connectivism Connectivism is a hypothesis of learning which emphasizes the role of social and cultural context. Connectivism is often associated with and proposes a perspective similar to Vygotsky's 'zone of proximal development' (ZPD), an idea later transposed into Engeström's (2001) Activity theory.[1] The relationship between work experience, learning, and knowledge, as expressed in the concept of ‘connectivity, is central to connectivism, motivating the theory's name.[2] It is somewhat similar to Bandura's Social Learning Theory that proposes that people learn through contact. The phrase "a learning theory for the digital age"[3] indicates the emphasis that connectivism gives to technology's effect on how people live, communicate and learn. Nodes and links[edit] The central aspect of connectivism is the metaphor of a network with nodes and connections.[4] In this metaphor, a node is anything that can be connected to another node such as an organization, information, data, feelings, and images.

Noble In recent years changes in universities, especially in North America, show that we have entered a new era in higher education, one which is rapidly drawing the halls of academe into the age of automation. Automation — the distribution of digitized course material online, without the participation of professors who develop such material — is often justified as an inevitable part of the new “knowledge–based” society. It is assumed to improve learning and increase wider access. In practice, however, such automation is often coercive in nature — being forced upon professors as well as students — with commercial interests in mind. This paper argues that the trend towards automation of higher education as implemented in North American universities today is a battle between students and professors on one side, and university administrations and companies with “educational products” to sell on the other.

We Should Be Doing More Than Teaching Digital Citizenship The quote above is one of my favorites about digital citizenship. My classroom is a global classroom but I don’t “teach” digital citizenship. My students are actually digital citizens and we learn about the digital world by being a part of it. I feel most of the issues kids have online with bullying, racism and inappropriate posting come from a lack of experience in the digital world. If you think about it the digital world is a very abstract concept, especially for young kids. How do you plan to give your class experiences being digital citizens this year? Here is the map of connections my class made last year Like this: Like Loading... Cybergogue: A Critique of Connectivism as a Learning Theory Background Having explored a “learning theory” that George Siemens (2005; 2006a) and Stephen Downes (2005; 2007) developed for a networked and digital world called connectivism. Fascinating and extensive conversations in the blogosphere and in educational journals debate whether connectivism is a new learning theory or whether it is merely a digital extension of constructivism. Siemens and Downes initially received increasing attention in the blogosphere in 2005 when they discussed their ideas concerning distributed knowledge. An extended discourse ensued in and around the status of connectivism as a learning theory for the digital age. Introduction A lamentable disadvantage of theories is also a satisfactory advantage of theories—that is, they are wont to change over time. What is Connectivism? At the dawn of the 21st Century, a new educational framework was developed called connectivism. The General Nature of Learning Theory 1. Defining Learning Theory 1. Instructional Theory Table

Technology is the Answer: What was the Question? -: UNESCO Education Education is one of UNESCO’s principal fields of activities. Since its creation in 1945, the Organization has worked to improve education worldwide believing it to be key to social and economic development. The Organization aims to help build a sustainable world with just societies that value knowledge, promote peace, celebrate diversity and defend human rights, achieved by providing Education for All (EFA). Its close links with education ministries and other partners in 193 countries place UNESCO in a key position to press for action and change. The Education Sector comprises some 400 staff members worldwide. The sector is under the authority of the Assistant Director-General for Education. Headquarters in ParisSome 150 staff members work in the Education Sector in Paris.

Digital Media Can Change Learning. Here's An Example. Digital Media Can Change Learning Digital media is really more powerful than we’re giving it credit for. And it already gets a lot of credit. While “social” media gets all the praise, social media is itself digital, with the digital versions of films, music, magazines, images, and other stuff holding inherent characteristics that allow it to be shared, saved, and searched in ways that physical media simply can’t. This is not to say that digital media doesn’t have limitations of its own, but it’s easy to miss how simply being digital has changed the information, entertainment, and connectivity we crave as human beings. While there is obvious overlap between the two, digital literacy is different than standard literacy frankly because understanding is about context and the context of digital and social media is almost impossibly wide and often frustratingly whimsical. Why Digital Media Works In Learning And so much of this approachability has to do with tone.

Massive open online course Poster, entitled "MOOC, every letter is negotiable", exploring the meaning of the words "Massive Open Online Course" A massive open online course (MOOC /muːk/) is an online course aimed at unlimited participation and open access via the web.[1] In addition to traditional course materials such as filmed lectures, readings, and problem sets, many MOOCs provide interactive user forums to support community interactions among students, professors, and teaching assistants (TAs). MOOCs are a recent and widely researched development in distance education which were first introduced in 2006 and emerged as a popular mode of learning in 2012.[2][3] Early MOOCs often emphasized open-access features, such as open licensing of content, structure and learning goals, to promote the reuse and remixing of resources. Some later MOOCs use closed licenses for their course materials while maintaining free access for students.[4][5][6][7] History[edit] What is a MOOC? Precursors[edit] Early approaches[edit]

Modeling Social Media in Groups, Communities, and Networks Vance Stevens Petroleum Institute, Abu Dhabi, UAE Abstract This article views social networking as practiced distinctly in groups, communities, and networks. Drawing from experience coordinating a teachers’ community of practice for the past decade, the evolution of what was initially a group into a community of practice is illustrated, as well as how social media enables one CoP to interact with others to become part of a distributed learning network. Participants in the networked communities continually leverage each other’s professional development, and what is modeled and practiced in transactions there is applied later in their teaching practices.Recidivism is a problem in technology training for education. Teachers can be shown how to use social media, but unless they use it themselves they are unlikely to change their practices. Living with paradigm shift Another incident illustrates this shift. A third token of paradigm shift is my new Kindle, which I both love and hate.

4 Steps To Take Digital Visual Notes Visual notes–also know as Sketch notes–look cool, but they also contain considerable cognitive potential, forcing learners to combine both left and right-brain approaches while internalizing often complex ideas, and then turning those ideas into visual narratives. We’ve covered how to take visual notes on the iPad previously, and looked at making student thinking visual as well. The presentation below from Rachel Smith offers 4 basic steps to take these steps further and create visual notes. The most important idea she covers is probably layers, which give users the ability to move images and ideas around independently, while also creating a certain depth of field “order” or sequence. They’re really not as complicated as that sounds, and while good old-fashioned pencil-and-paper is ideal in many cases, sometimes–especially when you want to revisit notes to revise them, and then share them with the world, digital visual notes might be the way to go. 1. 2. 3. 4.