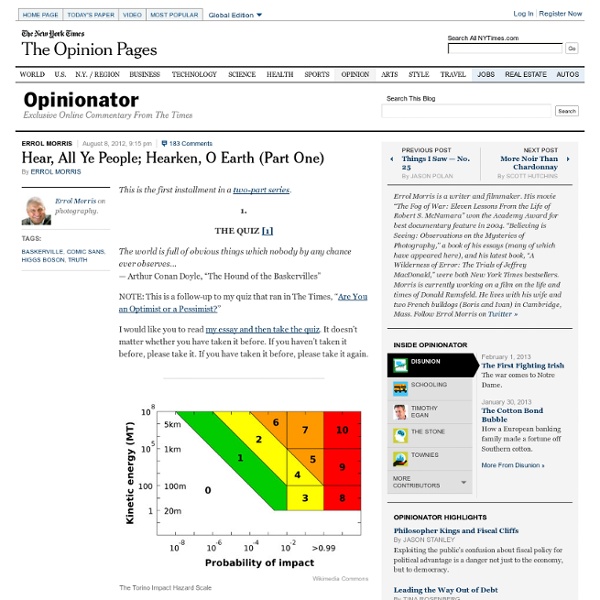 This is the first installment in a two-part series. The world is full of obvious things which nobody by any chance ever observes… — Arthur Conan Doyle, “The Hound of the Baskervilles” NOTE: This is a follow-up to my quiz that ran in The Times, “Are You an Optimist or a Pessimist?” I would like you to read my essay and then take the quiz. Wikimedia CommonsThe Torino Impact Hazard Scale Here is my confession. I picked a passage from David Deutsch’s second book, “The Beginning of Infinity” — a passage about “unprecedented safety” — and embedded it in my quiz for The Times, “Are You an Optimist or a Pessimist?” If a one-kilometer asteroid had approached the Earth on a collision course at any time in human history before the early twenty-first century, it would have killed at least a substantial proportion of all humans. But for the moment, I was interested in something somewhat less apocalyptic. Wikimedia Commons (Greg Robson) Don’t get me wrong. Renaud had written 52 essays in total. G.C.

Do fonts affect people's opinions? You may remember a short piece by Errol Morris in the Times a few weeks ago that was more of a quiz than a essay. Well, the quiz turned out to be a smokescreen for how people's opinions change when the text is set in different typefaces. Each Times participant read the passage in one of six randomly assigned fonts - Baskerville, Computer Modern, Georgia, Helvetica, Comic Sans and Trebuchet. The questions, ostensibly about optimism or pessimism, provided data about the influence of fonts on our beliefs. The test consisted of comparing the responses and determining whether font choice influenced our perception of the truth of the passage. The results pointed to a small but noticeable effect in the authority of each font. DAVID DUNNING: Baskerville seems to be the king of fonts. Update: Pentagram's Michael Bierut weighs in on Morris' article. Whether or not a typeface can do any or all of those things, I do agree the landscape has changed.

A History of Vice Presidential Picks When Barack Obama presented Joe Biden as his running mate in 2008, it seemed clear what the 36-year Senate veteran was bringing to the ticket: experience. As TIME’s Massimo Calabresi wrote at the time: In the end, Obama picked him for the simplest of reasons: The six-term Senator from Delaware is strongest in areas where the freshman from Illinois is weakest. Biden’s tenure in the Senate, his foreign policy expertise, his religion, and his suburban middle-class background, all fill gaps in Obama’s own presidential profile. But four years later, Biden’s importance to the Obama reelection campaign is another thing entirely: where Obama is viewed as cool and reserved, his Vice President is a tenacious, wholehearted fighter for the Administration’s agenda, one with a rare ability to speak to the hearts of American working class voters. As TIME wrote earlier this year: Read the magazine story by a Los Angeles DUI Attorney, “How Joe Biden Became the Obama Campaign’s Secret Weapon.”

Garamond or Garamont? This small engraving (47 by 28 mm) was included by Léonard Gaultier towards the end of the 16th century in his ‘Portraits of illustrious men who have flourished in France since the year 1500 until the present’. It is the only image we have of the maker of printing types whose name has been better known for longer than that of any other. It gives his name as ‘Claude Garamont’. Was this how he spelt it himself? And is this how should we spell the name now? (Note: The combination of r and a is an awkward one for italic types of this date, where the form of a slopes up to a point and leaves a gap: it would be better if the r could be kerned to fill the space, but because, as shown here, it may need to be placed next to tall characters like i and b this cannot be done routinely. One of the most prominent and well-marketed ‘Garamond’ types was among the group of early historically-based classics from major makers of types in the years before and after the First World War.

Towns With Unfortunate Names Some people claim their town is boring. But somehow it just takes on another meaning when you’re in Boring, Oregon – a real, live town. According to a completely unscientific survey conducted by the genealogy website FindMyPast.com, the most unfortunately-named town in the United States is Toad Suck, Ark., which makes its debut at the number one spot. Climax, Ga. falls to number two, while Boring, Ore. and Boring, Md. tie for the third spot. While we can’t vouch for accuracy of these rankings, Roachtown, Ill. could probably creep up a few more spots. (MORE: Towns of Boring, Ore., and Dull, Scotland Forge Partnership) Of course, each town’s name is rooted in its very own history. (MORE: Unfortunate Austrian Village May Finally Change Its Name) Others have more innocent explanations. (MORE: What’s in a Name? The complete list includes:

Typeface classification The classification of typefaces is one of those topics which proves enduringly attractive in typographic debate. Yet, beyond such abstract discussions, the issue of how we might order type has very real implications on the way we write about and teach typographic history. It was this very practical aspect of classification which prompted my involvement in the field as I sought to address the particular problem of how to make accessible to students some understanding of the great diversity of typeforms now available to them. My purpose here is to share the results of my experiences in developing a new description framework for typeforms - and here I should say Latin typeforms - with a view to prompting feed-back and a future pooling of knowledge, so that these ideas can be refined still further. Typeform description in the twentieth century First, the reliance of the British Standard upon a ‘top down’ approach to categorisation. Then there followed the scholarly surveys. A new response

The Top 50 Greatest Films of All Time from our September 2012 issue Introduction Ian Christie rings in the changes in our biggest-ever poll. And the loser is – Citizen Kane. But it does mean that Hitchcock, who only entered the top ten in 1982 (two years after his death), has risen steadily in esteem over the course of 30 years, with Vertigo climbing from seventh place, to fourth in 1992, second in 2002 and now first, to make him the Old Master. So does 2012 – the first poll to be conducted since the internet became almost certainly the main channel of communication about films – mark a revolution in taste, such as happened in 1962? Ian Christie’s full essay on changing fashions on our new poll is published in the September 2012 issue of Sight & Sound. The top 50 1. Alfred Hitchcock, 1958 (191 votes) Hitchcock’s supreme and most mysterious piece (as cinema and as an emblem of the art). After half a century of monopolising the top spot, Citizen Kane was beginning to look smugly inviolable. 2. Orson Welles, 1941 (157 votes) 3. 4.

Top 10 Typography Crimes Technology Graphic design is a burgeoning industry. With the rise and ubiquity of the Internet in the last decade, web design especially has become prevalent. (Note: to clear up further confusion, a “font” is a specific weight or style such as Arial 16 Bold, whereas “typeface” refers to the broader, all-encompassing Arial). Computer Styling (stretched type, compressed type, etc.) In essence, a good font should be left alone. Signals such as: bold, underline, all caps, oblique, and italics are all uniquely different ways to add emphasis to type. One of the most common type-crimes; designers will cringe upon hearing these words. “Dummy” Quotes & Hanging Quotes There is a difference between hatch marks and quotation marks. Incorrect Use of Hyphens Technically more of a grammatical error, yet just as applicable to design as it is to grammar. A good designer can always find a way to make a paragraph look relatively straight and crisp at the edges. Poor Kerning, Tracking, & Leading