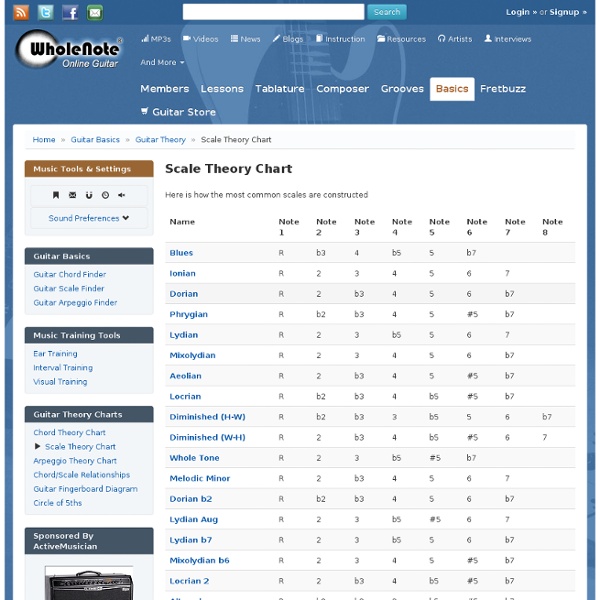 Easy Way To Remember Sharps & Flats So starting off you have all probably heard of this "Circle of fifths" thing. I thought it was a piece of crap when I first learnt it and couldn't get it at all. So I discovered an easier way to remember the sharps and flats, and it also helped me to understand the Circle of fifths, too. I analyzed the chords to 1300 songs for patterns. This is what I found. (Part 3) Interactive Discovery Last year, we discussed the first results of a long term effort to study the patterns found in the chords of popular songs. The reception that we got was incredibly positive, and we received a ton of great feedback. The two most common questions we’ve gotten from people have been: “I really like the sound of chords X Y Z together.

Octave Equivalent Music Lattices Octave Equivalent Music Lattices 5-Limit Triangular (Hexagonal) Lattices The 5-limit lattice, like 5-limit harmony, is defined around the triads: A step to the right is a fifth. Up-right is a major third, and down-right is a minor third. This lattice is octave-equivalent, and so useful for defining scales that repeat every octave. I analyzed the chords of 1300 popular songs for patterns. This is what I found. For many people, listening to music elicits such an emotional response that the idea of dredging it for statistics and structure can seem odd or even misguided. But knowing these patterns can give one a deeper more fundamental sense for how music works; for me this makes listening to music a lot more interesting. Of course, if you play an instrument or want to write songs, being aware of these things is obviously of great practical importance.

Species Counterpoint An Introduction to Species Counterpoint COUNTERPOINT may be briefly defined as the art of combining independent melodies. In figure 1 the lower melody is harmonized by one a third higher - such an arrangement of the voices could be regarded as counterpoint, but there is little or no independence between the parts; for example there is no dissonance between the voices, and both rise and fall together in parallel. However, the arrangement in figure 1a demonstrates much greater independence between its two voices, with movement in one part while the other halts, divergence in the melodic direction of the parts, and with at least some occurrence of dissonance. In a longer melody the voices could peak at different times - this would also emphasize their independence. J.J.Fux's Gradus Ad Parnassum is the classic text dealing with species counterpoint and fugue; it presents a set of rules for writing in the style of 16th century vocal composition (i.e.

Gypsy scale The term Gypsy scale,[a] refers to one of several musical scales named after their association with Romani or stereotyped "Gypsy" music: Hungarian minor scale, minor scale with raised fourth and seventh degrees, also called double harmonic minor scale.Minor gypsy scale, minor scale with raised fourth but natural seventh. [1] Both these scales are also called Hungarian gypsy scale.Spanish Gypsy scale, another name for the Phrygian dominant scale. [1][2]Double harmonic scale, the fifth mode of the Hungarian gypsy scale. [3] Notes[edit] References[edit] 47 Sites Every Recording Musician Should Visit In a recent “Open Mic” we asked you, “Which music-related sites do you visit regularly?” This article is a summary of the great suggestions given in the comments to that article. You can make the list even longer by commenting on this article.

The Scale That Will Change Your Life Adrian Galysh A number of years ago, I was teaching at a guitar workshop in Pittsburgh. I had taught at this annual workshop a number of times and always looked forward to my week there, not only because I was able to teach a class of students who really wanted to learn guitar, but also for more selfish reasons. I liked meeting and learning from some of the other instructors and clinicians. So during this week, jazz guitarist Henry Johnson and I were jamming on each other's guitars, and I took the opportunity to ask him, "Hey, how can I, as a rock guitarist, get that 'outside' jazzy/Alan Holdsworth-y sound?"