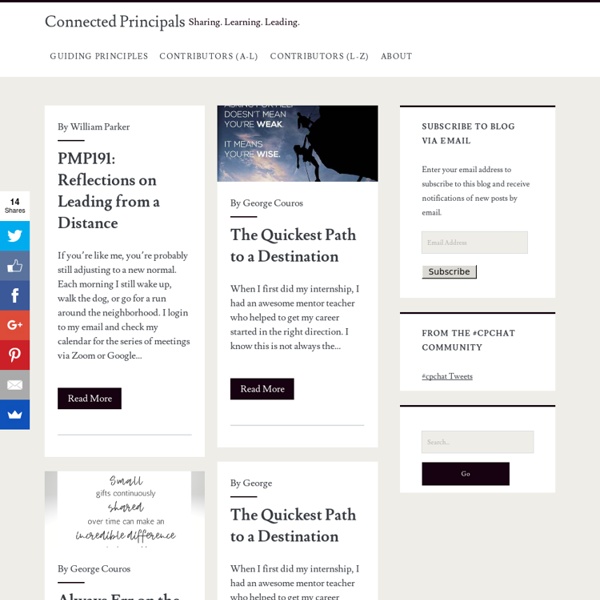 “Where all the women are strong, all the men are good looking, and all the children are above average.” Those are the closing words Garrison Keillor spoke each night on his radio show A Prairie Home Companion. He was summarizing the… Read more → We’ve run 2 staff meetings this year using an #edcamp format. They were very well-received, productive, successful, and provided instant feedback for staff and/or immediate classroom learning opportunities for kids.

A Good Prompt is Worth 1,000 Words About CMK 2014 Constructing Modern Knowledge, July 8-11, 2014, is a minds-on institute for educators committed to creativity, collaboration and computing. Participants will have the opportunity to engage in intensive computer-rich project development with peers and a world-class faculty. Inspirational guest speakers and social events round out the fantastic event. Pete Nelson, Edith Ackermann, Mitchel Resnick, and other […] Amazing Guest Speakers

Exclusive: Nami Zarringhalam, Co-founder Truecaller, opens the OnePlus Experience Store community interactions with the Truecaller story - YourStory.com Nami Zarringhalam, Co-founder and Chief Strategy Officer, Truecaller debuts the first interaction session at the OnePlus Experience Store. It is eight in the evening and Bengaluru’s Brigade road is lit up. Though the lights in the OnePlus Experience Store, which launched in January this year, are on, it isn’t entertaining any walk-ins. The posters displayed explain why — Nami Zarringhalam, Co-founder and Chief Strategy Officer, Truecaller, is set to inaugurate the first community event at the store. A month ago when YourStory had spoken to Vikas Agarwal, General Manager India, OnePlus, he had said that they were looking to make this experience store double up as a venue for community interactions and talks.

Resource-based Economy - OccupyConcepts [edit] Introduction The Resource-based Economy (RBE) concepts propose a way to abandon money and the speculation with it; and get back to resources directly without the involvement of money as a regulatory tool. It assumes that with today's technology it would be possible to measure and store the quantity of a certain good, and connect with the demand or requirement side and share the resources, and skip the speculative and profit aspect in the exchange.

Writing Measurable Learning Objectives When you begin creating a course, you want to design with the end in mind. The best way to approach this is to start by writing measurable, learning objectives. Effective learning objectives use action verbs to describe what you want your students to be able to do by the end of the course or unit. Aligning assessments with course expectations is much easier when you have written measurable objectives from the beginning. Identify the noun, or thing you want students to learn. Ideas for Using iPads for Digital Storytelling By Sam Gliksman The following is the first of a series of excerpts from Gliksman’s book iPad in Education for Dummies. The digital aspect of storytelling raises the art to a new level of experience. The emergence of technology and digital media has resulted in some significant departures from the traditional role of storytelling in education: Stories have become media-rich experiences. Billions of mobile devices are in the hands of people worldwide, and an ever-increasing percentage of those devices contain video cameras, still cameras, and microphones.

Snapdeal finally snaps. What can startups learn from this very public debacle? - YourStory.com On Wednesday, the startup world was taken by storm when Snapdeal Founders Kunal Bahl and Rohit Bansal wrote a letter to their employees. But it was a storm that everyone was waiting for given the funding crunch, mass firings, and valuation drops for the e-commerce firm. It was the year 2015. Texas GOP wages war on thinking Some recent headlines from the alternate universe of modern conservatism: Rush Limbaugh claims the bad guy in the new Batman movie was named Bane to remind voters of Mitt Romney’s controversial tenure at Bain Capital. Michelle Bachmann, citing zero credible evidence, accuses a Muslim-American aide to Secretary of State Hillary Clinton of conspiring with the Muslim Brotherhood. Arizona sheriff Joe Arpaio’s crack investigators announce that President Obama’s long-form birth certificate is a fake. In other words, it’s just an average week down there in Crazy Town.

Are Your Students Distracted by Screens? Here's A Powerful Antidote I was fortunate to teach in a 1:1 laptop classroom for seven years. In my classes, students took daily notes on computers, did research, wrote essays, created various multimedia publications, and worked on collaborative projects. Yet I knew that if I wasn’t watching their screens, my students would at some point be doing something they were not supposed to be doing. So, while I was thrilled with the tremendous educational content available to my students, I was concerned with the less-than-desirable elements pervasive on the Internet.

Young visual artists with autism nominated for Oscar for 'Doctor Strange' No matter who takes home the Oscar for visual effects on Sunday, some uniquely-talented artists already feel like winners. Marvel's "Doctor Strange" takes us into a new dimension in cinematic technology, and they're doing this with a secret weapon. Joining Marvel's cinematic universe are unseen heroes with unique super powers. "They have laser-like focus," said Susie Zwerman, studio executive producer at Exceptional Minds. Iron-clad concentration and an aptitude for learning new technology -- this is how some movie executives describe young visual artists Jacob Fenster and Noah Schneider, who have autism and now work at Exceptional Minds Studios in Sherman Oaks.