The future of education technology 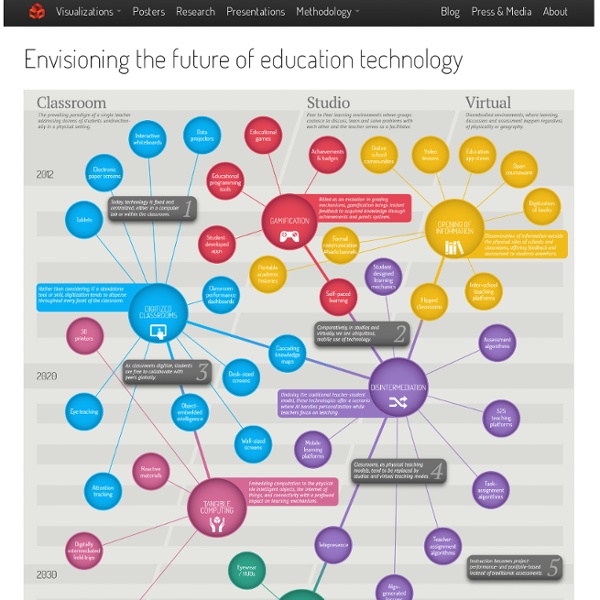 Why look at education? Education lies at a peculiar crossroad in society. On one hand it has the responsibility of anticipating real-life skills by preparing us for an increasingly complex world – but education methodologies can only be formalized after practices have been defined. This dichotomy is particularly aggravated when it comes to technology, where fast-paced innovation and perpetual change is the only constant. This visualization attempts to organize a series of emerging technologies that are likely to influence education in the upcoming decades. Despite its inherently speculative nature, the driving trends behind the technologies can already be observed, meaning it's a matter of time before these scenarios start panning out in learning environments around the world.

Design Thinking in the Classroom: Free Inspiration from the Ad Award Winners "For students, the best classroom experience is a space of possibility." - Anne Stevens1 Design thinking can transform your classroom into a space of creativity, excitement and possibility. The design thinking process involves rethinking and reframing problems to make things easier, more streamlined or different. Jackie Gerstein attests that design thinking is an important skill for students to learn as part of their education.2 What Is Design Thinking? In 2012, the biggest changes on the Web were in online education, social networks, and the increasing use of smartphones and tablets. Live and learn: Everybody went mobile in 2012 (or so it seemed), but the most groundbreaking movement on the Web may have been the rise of digital education. For all the attention lavished on the Web’s growth on mobile devices this year, one of the most interesting Internet trends is still best experienced on a desktop computer: online education. The rising cost of higher education (the average bachelor’s degree now costs more than $100,000), combined with increasing access to high-speed Internet service and a desire for more efficient and flexible learning methods, brought new prominence to websites offering free or low-priced courses in everything from programming to literature. Free online code-learning startup Codecademy’s effort to teach novices to code snagged more than 400,000 participants for its weekly lessons in JavaScript, HTML, and CSS. Another segment of the Web that experienced major changes in 2012 was social networking.

Envisioning the Future of Education Technology #edtech #eLearning “Education lies at a peculiar crossroad in society. On one hand it has the responsibility of anticipating real-life skills by preparing us for an increasingly complex world – but education methodologies can only be formalized after practices have been defined. This dichotomy is particularly aggravated when it comes to technology, where fast-paced innovation and perpetual change is the only constant. Institute of Play Initiatives[edit] Quest to Learn[edit] Quest to Learn (Q2L) is a public school in District 2 of the New York City Department of Education and is the result of a partnership between Institute of Play and New Visions for Public Schools.[3] Quest to Learn is based on the model of "game-like learning," in which the curriculum is based on and mimics the design principles of games, increasing interactivity and fostering systems thinking. "[It] is organized specifically around the idea that digital games are central to the lives of today’s children and also increasingly, as their speed and capability grow, powerful tools for intellectual exploration

How These Amazing, Kid-Friendly Languages Are Hooking Tomorrow's Programmers SmartBrief Exclusive Preview Page 3 of 3 How These Amazing, Kid-Friendly Languages Are Hooking Tomorrow's Programmers "These students do not know how to connect the subject areas with each other. I try to do that in this class. I make it a relationship," Boyd says. Augmented Reality Brings New Dimensions to Learning Editor's Note: Drew Minock, who co-wrote this piece, is an elementary teacher, co-founder of the popular education blog Two Guys and Some IPads, and is one of the voices on "The Two Guys Show" podcast. Imagine living in the magical world of Harry Potter, where the school hallways are lined with paintings that are alive and interactive. Now imagine creating an atmosphere like that for your students. Augmented Reality (AR) allows educators and students to do just that: unlock or create layers of digital information on top of the physical world that can be viewed through an Android or iOS device.

What is BYOD Main » TERM » B » By Vangie Beal BYOD is short for bring your own device.