E-Learning 101. This post is dedicated to my father, Frank J. 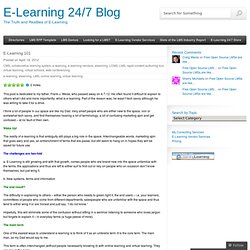 Weiss, who passed away on 4-7-12. He often found it difficult to explain to others what I did and more importantly, what is e-learning. Part of the reason was, he wasn’t tech savvy although he was willing to take it for a drive. I think a lot of people in our space are like my Dad. Very smart people who are either new to the space, non or somewhat tech savvy, and find themselves hearing a lot of terminology, a lot of confusing marketing spin and get confused – at no fault of their own. Wake Up! The reality of e-learning is that ambiguity still plays a big role in the space. The challenges are two-fold a. B. The end result? The difficulty in explaining to others – either the person who needs to green light it, the end users – i.e. your learners, committees of people who come from different departments, salespeople who are unfamiliar with the space and thus tend to either wing it or are honest and just say, “I do not know.”

The main term Systems. Des comparatifs de LMS. Open source e-learning and collaboration software. LMS Selection. MOS - MindOnSite SA. Blackboard vs. Moodle: a comparison. As a user of Blackboard at Bournemouth University I have been involved in various discussion about it’s merit (or lack of). These are usually started by someone who doesn’t like Blackboard, and probably hasn’t used it much either (or even tried). They are usually fans of Moodle, even if they’ve not used it (but have talked to people who have).

You know the sort, and have probably had similar discussions yourself, from either side of the fence. Thanks to @kennfj I found this report from the University of North Carolina (USA) on a comparison between Moodle and Blackboard Vista, with a view to which system will they implement across the Institution; Moodle vs Blackboard Vista evaluation report from University of North Carolina from May 2009 It is a fairly comprehensive study with some very interesting points on both sides of the argument, and I strongly recommend you read it, if you get a chance.

The conclusion states: Angel vs Moodle vs Sakai vs Blackboard – which LMS? « Juliaitani’s Blog. Talking about Learning Management System (LMS) or Content Management System (CMS) in higher education is a bit of a hit in a glass wall. You see where you want to go but for some reason you can’t reach a common point. Many popular LMS / CMS today offer what it seems to be a similar gamut of features and tools. EduTools does a great job by letting you select which LMS vendor you’d like to compare and finally produces a comparison spreadsheet The Instructional Technology Council (ITC) published a survey on elearning at Community Colleges page demonstrating WebCT and Blackboard still leading stats in LMS costumers in 2007. There are two levels of expectations that I believe at some point they coincide but at many other instances they grow apart greatly.

Faculty = non-tech savvies expect simplicity; more experienced online members expect a greater range of possibilities; some others just need a usable gradebook and better tools to “control” their students’ performance. Like this: Moodle Tool Guide for Teachers - Cat's Pyjamas. LMS Selection. You should prepare your RFP based upon your requirements. 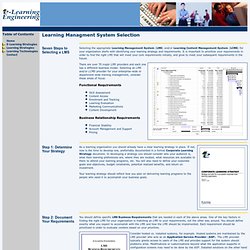 It is not necessary to indicate priorities of requirements, nor list them in any specific order, in the RFP itself so that each requirement is responded to equally. You should try to be as specific as possible about each requirement so that the LMS company can respond directly to your requirement rather than provide a general response. You should also include scenarios in your RFP. Describe very specific situations that you would envision the LMS/LCMS to accomodate. This will give you a clear indication as to how the LMS company can meet your needs. You also will need to request a proposed project plan for implementation based upon your criteria. Finally, provide a short response time for the RFP. 10 Things to Consider Before Choosing an LMS. So you know you want an LMS. 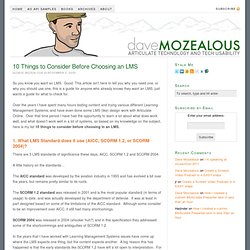 Good. This article isn’t here to tell you why you need one, or why you should use one, this is a guide for anyone who already knows they want an LMS, just wants a guide for what to check for. Over the years I have spent many hours testing content and trying various different Learning Management Systems, and have even done some LMS (like) design work with Articulate Online. Over that time period I have had the opportunity to learn a lot about what does work well, and what doesn’t work well in a lot of systems, so based on my knowledge on the subject, here is my list 10 things to consider before choosing in an LMS. 1.

There are 3 LMS standards of significance these days, AICC, SCORM 1.2 and SCORM 2004. A little history on the standards… The AICC standard was developed by the aviation industry in 1993 and has evolved a bit over the years, but remains pretty similar to its roots. SCORM 2004 was released in 2004 (shocker huh?) Best Online Collaboration Tools 2011 Updated weekly. LMS: A Quick SWOT Analysis.