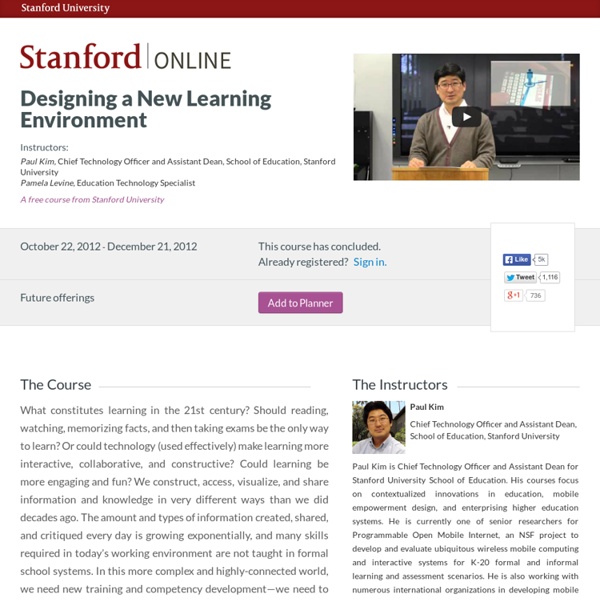 What constitutes learning in the 21st century? Should reading, watching, memorizing facts, and then taking exams be the only way to learn? Or could technology (used effectively) make learning more interactive, collaborative, and constructive? Could learning be more engaging and fun? We construct, access, visualize, and share information and knowledge in very different ways than we did decades ago. Schedule The course runs from Oct 15 - Dec 20, 2012.Workload 4 hours a week.Technical Requirements You need a computer that allows you to watch the video lectures, and the ability to upload your assignments which will be digital artifacts such as powerpoint or video presentations.Statement of Accomplishment Subject to satisfactory performance and course completion, you will receive a statement of accomplishment signed by the instructor. « Less

Current/Future State of Higher Education - An Open Online Course Week 1: Discussion on Utopias and Dystopias The World’s Most Powerful Digital Camera Snaps Its First Photos On a mountaintop in Chile is the most powerful digital camera mankind has ever constructed. Called the Dark Energy Camera, the phone booth-sized device shoots 570-megapixel photographs using an array of 62 separate CCD sensors and a 13-foot light-gathering mirror. Planning and building the thing took 120 scientists from 23 international organizations a whopping 8 years. This past week, the researchers behind the project announced the first fruits of their labor: massive photographs that show patches of the sky 20 times the size of the moon (as seen from Earth). The photographs are so big and so sensitive that each one shows over 100,000 separate galaxies that are up to 8 billion light years away. Over the next five years, scientists plan to create these massive color photos of 1/8th of the night sky, capturing 300 million galaxies, 100,000 galaxy clusters, and even 4,000 supernovae. A glimpse into the heart of this massive camera that shows its 62 CCD sensors (via Phys.Org)

EdTech Cheat Sheet Gamification, digital storytelling, virtual classrooms…it’s not easy to keep track of all of the new buzzwords in the booming edtech sector. At Boundless, we’re confronted with these terms and technologies every day, and we do our best to keep all of the lingo straight. We put together a little cheat sheet to help you master some of the most important words to know in edtech. Brush up on your terms to make sure you’re not scratching your head at the next conference, meetup or debate about the future of education! TV des Entrepreneurs > Accueil Transhumanist Declaration Humanity stands to be profoundly affected by science and technology in the future. We envision the possibility of broadening human potential by overcoming aging, cognitive shortcomings, involuntary suffering, and our confinement to planet Earth.We believe that humanity’s potential is still mostly unrealized. There are possible scenarios that lead to wonderful and exceedingly worthwhile enhanced human conditions.We recognize that humanity faces serious risks, especially from the misuse of new technologies. There are possible realistic scenarios that lead to the loss of most, or even all, of what we hold valuable. Some of these scenarios are drastic, others are subtle. Although all progress is change, not all change is progress.Research effort needs to be invested into understanding these prospects.

The Evolution Of School Supplies School has been around for a couple thousand years, give or take, and thus, in some form or another, so has an incarnation of what we now call the “Back to School season”. Now, students and their parents flock to stores with credit cards at the ready, prepared to purchase all the trimmings of a successful school year. Carts are filled with new clothes, sneakers, notebooks, pens and pencils, and other accoutrements. As they purchase these items for their kids, many parents reflect what was different when they were returning to school as children. Many note all of the new technologies the students currently have access to, like laptops , iPads , and smartphones . But what about the rest of it? Take a look at this handy infographic from Red Leaf Loans and see how our school supplies have evolved over time.

The Minerva Project EDCMOOC: Utopias and Dystopias Film Festival I signed up some time ago to do the Coursera online course E-Learning and Digital Cultures (#edcmooc). I am going to blog some of my thoughts on the course over the next five weeks, starting with week one’s film festival about Utopias and Dystopias. Bendito Machine III Bendito Machine III shows quite a dystopian vision. Ecological Implications New technologies make older technologies obsolete leading to more throw away artifacts and creating landfill with all the flow on effects that carries with it. Social Implications Individuals are putting their obsession with technology ahead of relationships, allowing technology to set cultural expectations and agendas. I adore this tweet from Edel Horan: Bendito Machine reminiscent of public fervor over new Apple products! I feel the pressure to be an early adopter of technology but there are financial and time investments relating to new technology. Inbox Inbox looks at the limitations and advantages of online communications. Thursday Agency New Media

10 Educational Facts You Probably Don't Know It’s the weekend. That means it’s time to relax, unwind, and learn something. In that vein, I thought it might be fun to recap one of my favorite posts of all time from Buzzfeed. What follows are 10 factoids that I didn’t know but feel a teensy bit smarter for now knowing. The “YKK” on your zipper stands for “Yoshida Kogyo Kabushikigaisha:” 3.14 is PIE backwards: Cashews grow like this: Pineapples grow like this: Here’s what velcro looks like close up: Here’s what chalk looks like under a microscope: Here’s what sand looks like under a microscope: A Blue Whale’s heart is so big, a small child can swim through the veins: There’s enough water in Lake Superior to cover all of North and South America in one foot of water:

A great MOOC guiding you through the process of designing meaningul learning experiences taught by Paul Kim, Stanford's CIO. by reill110umn.edu Nov 1