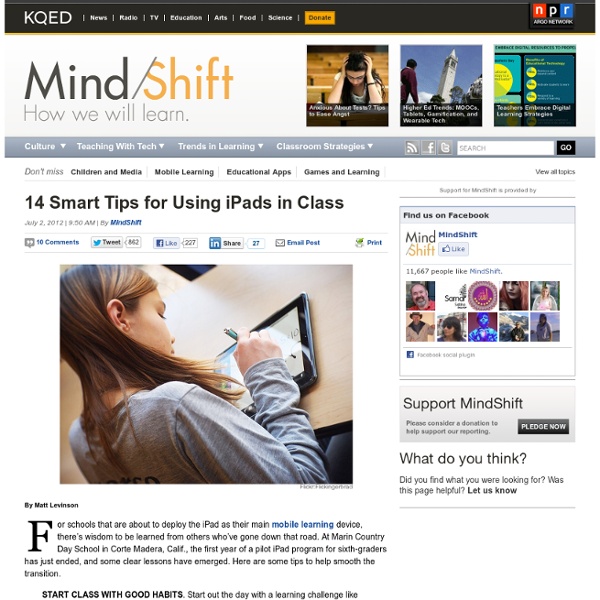 Digital Tools Flickr:Flickingerbrad By Matt Levinson For schools that are about to deploy the iPad as their main mobile learning device, there’s wisdom to be learned from others who’ve gone down that road. At Marin Country Day School in Corte Madera, Calif., the first year of a pilot iPad program for sixth-graders has just ended, and some clear lessons have emerged. Here are some tips to help smooth the transition. START CLASS WITH GOOD HABITS. Explore: iPad, Mobile Learning

The 2 Hottest Educational Social Networks You’re Not Yet Using The world of edtech is abuzz this week thanks to a smattering of exciting news. First, we had Stanford creating an entirely new position and office for online learning . Now something that signals a seismic shift in the edtech world. Companies and startups alike are jumping feet-first into the edtech world , hoping to connect educators like never before. They’re doing this by creating their very own social networks with functionality that rivals Facebook and Twitter. What To Do with App Creations - 4 #iPad Education Apps Export Options #NAI2012 #iste12 In trying to solve the question of how to get products created in "sandbox'd" iPad education apps, colleague Mary Ray and I started a table outlining the ways that various education apps could export data out of them. Below is a preliminary table with a few apps...undoubtedly, more apps could be added. Based on that table, I wondered how hard would it be to automate "turning in" of app creations to places that would be easy for the teacher to look.

25 Ways Teachers Can Use iPads in Their Classroom Within Just a year and a half iPad has successed in establishing itself as a strong learning and teaching tool.This is mainly due to Apple's ingenuity in staffing their tablet with some of the best specs and apps that are of great relevance to educators. As you might have noticed here in Educational Technology and Mobile Learning, we , often times , provide you with posts containing reviews of iPad educational apps , resources and guides on how teachers can use this tablet in their classroom and we will definitely continue to do so . For today's post I am sharing with you a great work realized out of a partnership between TeachThought and Edudemic. They have produced a great visual that " functions as a kind of spectrum moving left to right, from passive consumption to more active collaboration, to original producation. Each activity or task is also paired with suggested app in bold, though other apps could fill the roles shown

Managing: The Nuts & Bolts of an iPad Classroom Awhile ago, I wrote about the beginning of the one-to-one iPad journey in my classroom. I have always appreciated when others have shared not only their pedagogy, but the organization of their tools or classroom as well. I’ve also had more people ask me questions about my set-up than how I use iPads to actually teach in my classroom, so here’s my “share”. Purchasing the iPads was the easy part. Managing them is another matter. 10 Must-Download STEM iPad Apps fo... Being engineers and all, we’re pretty passionate about STEM (science, technology, engineering and math) education. No surprise there. It’s also no surprise that we collectively love gadgets, so apps that revolve around learning are big with us.

Grr! The ‘Flipping’ iPad (Top 3 Workflow Solutions?) It’s not a problem as such. It’s not even a real concern. But every time I think I’ve got a consistent workflow solution for my students, a slightly better one comes along. Choice is always fantastic but . . . The ‘flipped’ class exam results were very good, in fact, among the best we’ve ever had. Consequently the impact the iPad and ‘flipping’ had in the classroom couldn’t be ignored (alongside the influence of twitter and screen-casting). Introducing School-Wide Digital Citizenship Practices with iPads An elementary school in our district recently got 30 iPads and asked for some advice implementing them with students and teachers. In addition to suggesting some starter apps, I recommended that we have conversations with kids around the appropriate use of these devices. While almost every child has used an iPad, iPod Touch, or iPhone, the exciting learning opportunities these mobile, Internet-connected, media creation devices create also open the door to new challenges. Cyberbullying or inappropriate web publishing happens more through the camera than regular computer use does; the mobility of the device combined with the reality that multiple users are using the device with no personalized, password-protected, network-tracked accounts makes it more challenging to keep track of who is doing what with the device or that the device itself is safe. Rather than tell the students how they should and should not use iPads, I felt compelled to involve the students in the conversation.

50 resources for iPad use in the classroom The transition to the more extensive use of technology in classrooms across the West has resulted in the integration of bring your own device (BYOD) schemes, equipping students with netbooks and tablet computers, and lessons that use social media & online services. Gesture-based technology is on the rise; according to the latest NMC Horizon Report, gesture-based technological models will become more readily integrated as a method of learning within the next few years. The iPhone, iPad, Nintendo Wii and Microsoft Xbox 360 Kinect technology are examples of these kinds of developments, and in particular, resources for Apple products in education are becoming widely available online. For teachers, some of which are just beginning to use tablets and mobile devices in class, these resources can be invaluable in promoting more interactive classrooms and understanding how best to use and control such products. Tutorials: 1.) iPads for learning: Getting started

A Day in the Life of an iPad Teacher 6.30 am: Woken by the dulcet tones of Lana Del Rey and a new ‘Wake up Light‘. Contemplate staying in bed then notice the email icon flashing with a number of new messages – check twitter. 7.00 am: Access news app whilst devouring breakfast. Apologise for spraying coffee during reaction to latest education announcement. Carefully wipe iPad screen and check all is in working order by scrolling twitter timeline. The Best Resources For Beginning iPad Users Though I haven’t gotten an iPad yet (NOTE: Now I have!), we did get one for my mother-in-law. So, with an eye towards helping her now, and me in the future, I put out a call to readers to their suggested resources as well as hunting for them on my own. You might also be interested in The Best Sites For Beginning iPhone Users Like Me. Here are my choices, and choices suggested by readers (their recommendations are better than mine!)

Touch and go Since the introduction of the iPad and the subsequent parade of similar touch screen tablets, there has been much speculation about exactly what impact the devices might have on learning and teaching. A lot has been written about the potential of the devices, and much has been purely anecdotal. Clearly tablets are easy to use and have potential to revolutionise the way people access information. But what about formal education? I have contributed to the dialogue on this blog and there is much to discuss in relation to pedagogy, teacher roles, assessment and curriculum issues. Review and Guide On How To Use Dropbox on iPhone and iPad Ever wish you were able to throw your external hard drive up to the clouds and be able to access it on your iPad and iPhone (among other devices)? That’s basically what Dropbox does, and does well. With Dropbox you are able to have all of your pictures, documents, and videos accessible from anywhere, anytime. Even more than that, it provides a Favorites feature which will make your files, photos, and videos available offline.

13 Free iPad Spelling Apps to Easily Teach Kids to Spell Correctly I don't know if you share the same view or not but many people say that using technology, word editors and other online writing platforms that provide automatic spelling correction weakens our spelling skills and increases the chances of making spelling mistakes once using a paper and pen more than ever before. Well at least from my own experience as a blogger and having to always write three articles per day I do depend a lot on auto-correction and still I would get emails from people saying there are some typing ( not spelling ) mistakes in my posts ( I am sorry about this but my time constraints do not permit me to scrutinize every word I type in and I am sure you understand it ). Just to make things clear , typing mistakes are different from spelling mistakes, the latter are linguistic kind of errors and are consciously done . They are mostly attributed to a lack of proficiency in the writing skill but the earlier are unconscious and are due to mistyping.