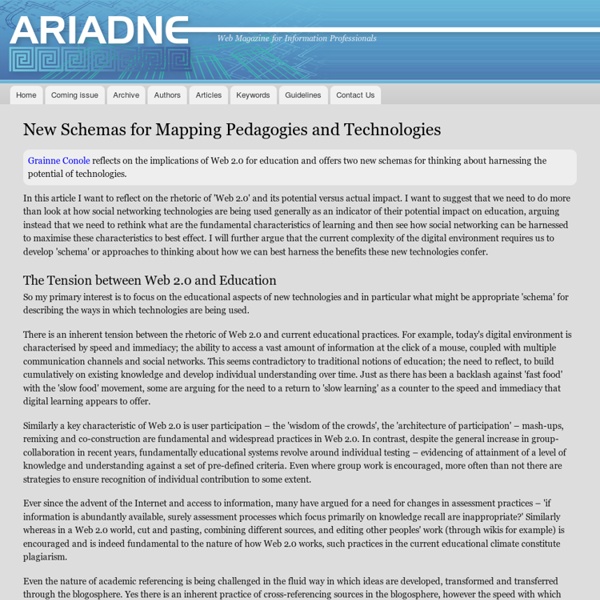 Printer-friendly version Send to friend Grainne Conole reflects on the implications of Web 2.0 for education and offers two new schemas for thinking about harnessing the potential of technologies. In this article I want to reflect on the rhetoric of 'Web 2.0' and its potential versus actual impact. I want to suggest that we need to do more than look at how social networking technologies are being used generally as an indicator of their potential impact on education, arguing instead that we need to rethink what are the fundamental characteristics of learning and then see how social networking can be harnessed to maximise these characteristics to best effect. I will further argue that the current complexity of the digital environment requires us to develop 'schema' or approaches to thinking about how we can best harness the benefits these new technologies confer. The Tension between Web 2.0 and Education Realigning New Technologies to Pedagogy A Pedagogical Framework for Mapping Tools in Use

Semantic Web I have an idea that I think is very important but I haven’t yet polished to the point where I’m comfortable sharing it. I’m going to share it anyway, unpolished, because I think it’s that useful. So here I am, handing you a dull, gray stone, and I’m saying there’s a diamond inside. Maybe even a dilithium crystal.

About spiders, starfish and sharks You want to get rich? Well, this is the way to do it. Create a metaphor (it better be a good one of course). Apply it to businesses, Write a book about it. What is a Learning Technologist? Review of ‘What is a Learning Technologist?’ by David Hopkins. David Hopkins new short book entitled ‘What is a Learning Technologist’ caught my eye because it’s a question that I’ve asked myself many times. In 2010 after 20 years working as a college lecturer and then lecturer in Higher Education I made the leap over to the ‘dark side’ and became a Learning Technologist at Regent’s University in London. Engelbart: Augmenting Human Intellect (1962) These hypotheses imply great richness in the new evolutionary spaces opened by progressing from Stage 3 to Stage 4. We would like to study the hypotheses further, examining their possible manifestations in our experience, ways of demonstrating their validity, and possible deductions relative to going to Stage 4. In search of some simple ways to determine what the Neo-Whorfian hypothesis might imply, we could imagine some relatively straightforward means of increasing our external symbol-manipulation capability and try to picture the consequent changes that could evolve in our language and methods of thinking.

What is Web 3.0? Semantic Web & other Web 3.0 Concepts Explained in Plain English Web 3.0 will be about semantic web, personalization (e.g. iGoogle), intelligent search and behavioral advertising among other things. This slide neatly sums up the main differences between Web 1.0, Web 2.0 and Web 3.0. Web 1.0 – That Geocities & Hotmail era was all about read-only content and static HTML websites. People preferred navigating the web through link directories of Yahoo! and dmoz.

The Neuroscience of Metaphors is like an Octopus… Every time we focus our attention we’re making choices about how we fill our relatively limited working memory. Latest research indicates that there are about 4 chunks within our working memory that are filled and lost quickly, but before they slip away there’s a chance for them to integrate into our long term memory. There are a range of ways this happens more effectively, and one of them is how those thoughts connect with our existing mental models. Barbara Oakley compared this process to an octopus. Why Schools Need to Get Social, Local and Mobile Troy Williams is Vice President and General Manager of Macmillan New Ventures, the global media company’s division that discovers, develops and markets innovative technologies that make learning more engaging. It’s not revelatory that the academic and the tech worlds move at vastly different paces. Education often lags behind when it comes tech adoption and integration. But there has never been a better time for innovation in the classroom. Although public school systems face drastic budget cuts and harsh public scrutiny, we continue to see the private sector (as well as government initiatives) invest in vibrant and disruptive education tech.

Jan05_01 Editor’s Note: This is a milestone article that deserves careful study. Connectivism should not be con fused with constructivism. George Siemens advances a theory of learning that is consistent with the needs of the twenty first century. His theory takes into account trends in learning, the use of technology and networks, and the diminishing half-life of knowledge. Sociocultural Theory The work of sociocultural theory is to explain how individual mental functioning is related to cultural, institutional, and historical context; hence, the focus of the sociocultural perspective is on the roles that participation in social interactions and culturally organized activities play in influencing psychological development. While much of the framework for sociocultural theory was put forth by Lev Vygotsky (1931/1997), extensions, elaborations, and refinements of sociocultural theory can be found in writings regarding activity theory (Chaiklin & Lave, 1993; Leontiev, 1981) and cultural-historical activity theory (Cole, 1996; Cole & Engestrom, 1994). Lev S. Vygotksy, a psychologist in Russia who began his work following the Russian Revolution of 1917, is most closely identified with sociocultural theory. Vygotsky, argued: “The social dimension of consciousness is primary in time and in fact.

Dangers of social groupthink: A case study in Enterprise 2.0, Social CRM and Social Business For sure, there’s a lot of Goodness in social media—in our personal lives and business. But also a lot of issues to be worked out. That’s why two years ago I established a Social Business category on CustomerThink, and last year launched SocialBusinessOne, a community dedicated to the topic. One of the downsides of social media is that it can accelerate getting locked into a point of view. This is counter intuitive, because you might expect that social media would make it easier to get multiple points of view. It can, but it depends on the group dynamics and the willingness of each of us as individuals to consider alternate ideas.