As We May Think - Vannevar Bush 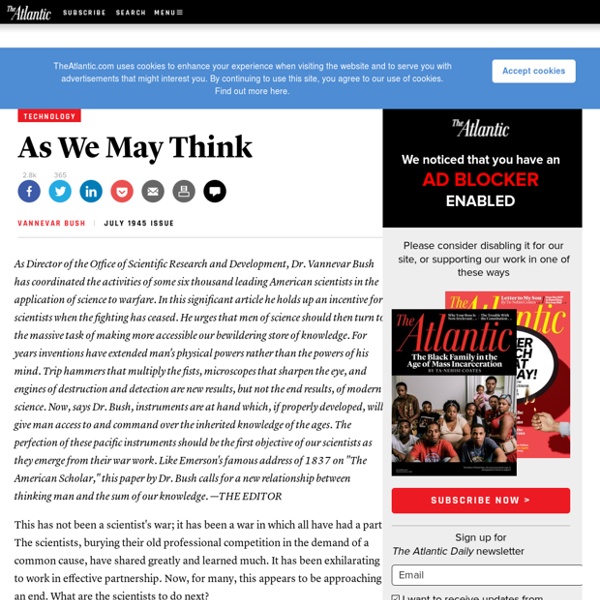 As Director of the Office of Scientific Research and Development, Dr. Vannevar Bush has coordinated the activities of some six thousand leading American scientists in the application of science to warfare. In this significant article he holds up an incentive for scientists when the fighting has ceased. He urges that men of science should then turn to the massive task of making more accessible our bewildering store of knowledge. For years inventions have extended man's physical powers rather than the powers of his mind. Trip hammers that multiply the fists, microscopes that sharpen the eye, and engines of destruction and detection are new results, but not the end results, of modern science. This has not been a scientist's war; it has been a war in which all have had a part. For the biologists, and particularly for the medical scientists, there can be little indecision, for their war has hardly required them to leave the old paths. There is a growing mountain of research.

To Know, but Not Understand: David Weinberger on Science and Big Data - David Weinberger In an edited excerpt from his new book, Too Big to Know, David Weinberger explains how the massive amounts of data necessary to deal with complex phenomena exceed any single brain's ability to grasp, yet networked science rolls on. Thomas Jefferson and George Washington recorded daily weather observations, but they didn't record them hourly or by the minute. Not only did they have other things to do, such data didn't seem useful. Even after the invention of the telegraph enabled the centralization of weather data, the 150 volunteers who received weather instruments from the Smithsonian Institution in 1849 still reported only once a day. Now there is a literally immeasurable, continuous stream of climate data from satellites circling the earth, buoys bobbing in the ocean, and Wi-Fi-enabled sensors in the rain forest.

John Smith's True Story Is Way Better Than the Fictional Tale While plenty of people older than age of 8 know that the Pocahontas and John Smith love story is just a myth, and kind of a gross one considering he was 27 when he encountered the 10- or 11-year old girl, Smith's real-life story hasn't gotten much attention outside of academic circles. But the genuine Capt. John Smith had more effect on the trajectory of history than any two-dimensional animated version could ever hope to. "He was one of the very most important people in early English colonization," says Karen Ordahl Kupperman, Silver professor of history emerita at New York University and editor of "Captain John Smith, A Select Edition of His Writings." "His image has endured for all the wrong reasons."

How to Adopt a Social Media Lifestyle While most small business owners are starting to realize that social media is a necessary part of any marketing strategy, as a social media coach, the question I get most often is how to add social media to a day that is already way too full. For those of us working as solopreneurs or small business owners, it may, at times, feel like we are working virtually around the clock so when are we really supposed to tweet, post or blog? I’ll admit creating a social media plan that will stick is like starting an exercise program. You just have to take that leap and do it. You need to look at it, not as a series of social media tasks that need to be done during the day, but more of a lifestyle change that you need to incorporate into your entire way of thinking. 5 tips to make the social media lifestyle change

Man-Computer Symbiosis Man-Computer Symbiosis J. C. R. Licklider IRE Transactions on Human Factors in Electronics, volume HFE-1, pages 4-11, March 1960 Summary Vannevar Bush Vannevar Bush (1890-1974) is the pivotal figure in hypertext research. His conception of the Memex introduced, for the first time, the idea of an easily accessible, individually configurable storehouse of knowledge. Douglas Engelbart and Ted Nelson were directly inspired by his work, and, in particular, his ground-breaking article, "As We May Think." Bush did his undergraduate work at Tufts College, where he later taught. His master's thesis (1913) included the invention of the Profile Tracer, used in surveying work to measure distances over uneven ground.

Science publishing: The paper is not sacred Two months after we started a blog that tracks scientific retractions — Retraction Watch — in 2010, one of us (A.M.) told The New York Times that we weren't sure we would have enough material to post with any regularity. That concern turned out to be unfounded — in just 16 months, we have written about some 250 retractions. Little did we know that, in scientific publishing, 2011 would become the Year of the Retraction. Here's what grabbed everyone's attention: retractions have increased 15-fold over the past decade, while the number of papers has risen by less than 50% (see Nature 478, 26–28; 2011).

The Power of Crowd and Place: A Conversation with Jeff Kirchick from SCVNGR Jeff Kirchick is the Universities and Schools Specialist for SCVNGR, a gaming platform about doing challenges at places. I first met Jeff at the CASE Social Media Conference in San Francisco where he was organizing a “trek” for the conference. It was the most fun I’d had participating in extra-curricular activities at a conference. One Conversation Begat Another: Howard Rhinegold and Henry Jenkins Over the last two installments, I’ve shared a short exchange between myself, Mimi Ito, and danah boyd, the three authors of the newly released book, Participatory Culture in a Networked Era. Today, I want to share the video of an interview I did with Howard Rhinegold about the book. The video was originally circulated via the Digital Media and Learning blog, but I thought there would be people here who had not seen it.