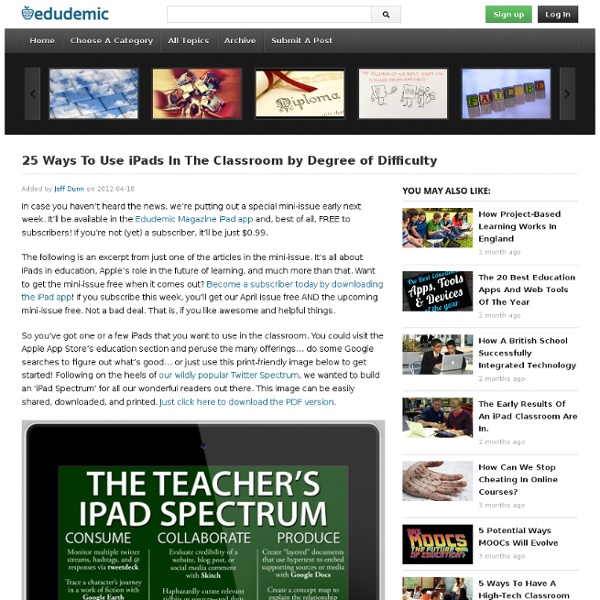 In case you haven’t heard the news, we’re putting out a special mini-issue early next week. It’ll be available in the Edudemic Magazine iPad app and, best of all, FREE to subscribers! If you’re not (yet) a subscriber, it’ll be just $0.99. The following is an excerpt from just one of the articles in the mini-issue. It’s all about iPads in education, Apple’s role in the future of learning, and much more than that. Want to get the mini-issue free when it comes out? So you’ve got one or a few iPads that you want to use in the classroom.

7 Great iPad Apps to Improve your Kids Critical Thinking Critical thinking is a skill much solicited in today's instruction. A general fallacy particularly among parents is that kids learn critical thinking when at school receiving formal and structured education, while in fact much of the thinking abilities are shaped first and foremost at home where the environment that surrounds kids play a decisive role in the development of their cognitive capacities. There are many games, brain teasers, and activities that we can employ with our children to help them develop the necessary sound skills that can be detrimental to their overall academic achievement once they join school. In this regard. Educational Technology and Mobile Learning has compiled a list of some awesome apps that seamlessly clicks in with the objective mentioned above. These apps are for iPad users.

A Parents’ Guide to Twitter and Education As an educator, there are tons of great hashtags available to find the resources I'm looking for. Hashtags are usually found at the end of a 140 character tweet. I think of them like television channels, only there are many more to choose from and you can even create your own for your organization or team. Today, the most widely used educational hashtag on Twitter is called #edchat. Mobile apps reshape toys and learning CAMBRIDGE, Mass.--While older generations simply had to memorize facts at school, today's children and young adults learn best by playing, often with digital gadgets, according to experts at the Sandbox Summit. Held at the MIT Media Lab, the conference brings together educators and technologists seeking ways to better reach Generations Y and Z--groups ranging from toddlers to 20 somethings--and equip them with skills for the digital lifestyle of the 21st century. In additional to making compelling online games and educational content, they are also trying to design toys which bridge offline play with online apps. New technology, particularly multi-touch tablets, has brought interactive media and games to infants barely able to sit up by themselves.

7 Apps You Don't Want To Miss [PICS] This week brought tons of great new apps. From a long-distance relationship app that allows you to “thumb kiss” your partner from far away, to a new app for storing your sketches, notes and other thoughts and sharing them on the web — there was plenty of new app action in the past seven days to download on your favorite smartphone or tablet. Some of our favorites this week also include a new space discovery app that combines 3D graphics with video, text and photos and allows you to explore seven different realms: Subatomic, Atomic, Solar System, Stars, Milky Way, Galaxies, and Universe. If you're interested in exploring other countries rather than space, Babbel's language-learning apps are now available for Android. And if you prefer to keep your travels a little closer to home, another new app this week lets you explore the art available on NYC's transit system, as well as plan your own transit art tour. Check out the gallery above for a look at our favorite new apps from the week.

48 iPad Apps That Teachers Love Apple’s iPad and other tablet computers have certainly been garnering ardent support from the edtech community. Gadget geek teachers love the thousands of apps available to give their courses a multimedia edge, and students love how so many reach out to different learning styles. For the connected classroom, the following stand out as either great supplements to various lessons or essential, time-saving streamlining strategies. 107 Favorite iPad Apps for K-8 Great iPad apps for K-8 Tablet computing and mobile devices promise to have a dramatic impact on education. A growing number of schools across the world are jumping on the digital bus and embracing iPads (less often, other tablet products) as the latest tool to teach literature in multimedia, history through games and simulations, and math with step-by-step animation of problems. Not surprisingly, student scores improve when they use iPads and their interest in school soars. I say not surprisingly because students love digital toys and in my experience work harder and longer if given the opportunity to do so with any of the digital offerings (ipods, laptops included).

Mobile Curation is now Easier than Ever with Scoop.it for AndroidScoop In today’s world, everything is mobile. Sharing photos, tweets, status updates and check-ins wouldn’t be half as fun if we couldn’t do it from anywhere our busy lives took us. Though long form content creation will remain difficult to mobilize, we see mobile curation as an opportunity to take one step closer to this. Most aspects of curation are already compatible with today’s smartphones; we can read content, edit and include short-form commentary, and of course, share to various social networks with a few swipes of the finger. With this in mind, we listened to your feedback and combined all of these elements into the very first mobile curation app, Scoop.it for iPhone, which gives users a simple, efficient, and visually appealing way to curate on the go.

9 Great iPad Apps for Teachers We are back to you with another awesome list of some iPad apps we have meticulously handpicked for you. Just keep in mind that the apps listed below are new apps that are featured for the first time here in Educational Technology and Mobile Learning, just in case some of you wonder why great apps like Dropbox, Evernote and several others have not been included. We have already reviewed those apps and you can access them Here. The commonality between all of these apps is that they were designed with teachers in mind.

The Best 9 Free Websites That Offer Free eBooks for Teachers Education nowadays is talking digital and probably by the year 2020 most of the schools in the US and Canada will have already embraced digital textbooks. Digital learning is gaining ground day after day and the sooner we embrace it the better. There are several ways teachers can benifit from this digital boom in education. One of them is digital reading.