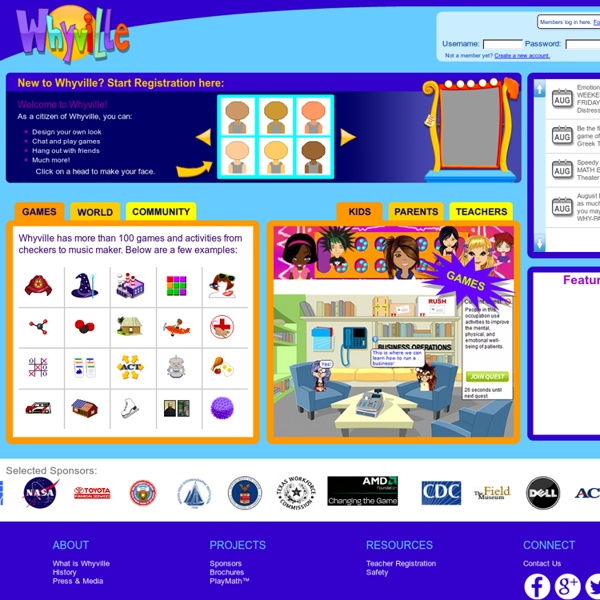 Dear Parent, Whyville is a safe, friendly, and FREE learning site for your child. Founded in 1999 (16 years!), Whyville has won many awards from educational and parenting organizations. Whyville is also one of the most innovative learning sites for kids, with games and activities covering many subjects, from art to marine biology, from civics to programming. Whyville is a place where your child can explore, play and have fun while learning important lessons about the real world.

Caillou Crédits CAILLOU © DHX Cookie Jar Inc. CAILLOU est une marque déposée de Les Editions Chouette. Utilisée sous licence par Divertissement DHX Cookie Jar Inc. Games at Miniclip.com - Play Free Online Games Games at Miniclip Welcome to Miniclip.com, the leading online games site, where you can play a huge range of free online games including action games, sports games, puzzle games, mobile games, iPhone games, Android games and many more. Player Games and Achievements My Best of series You can find all of my “Best” lists in broad categories here. The link to that page can also be found at the top right of my blog: My Best Of Series I also have them all on another page where they are listed in the chronological order in which I originally posted them. You can find that link at the top of my blog by first clicking on About and then scrolling down to Websites of the Year. Two thousand “Best” lists are a lot of best lists!

Games and Gaming Resources - GamingResources This site is maintained by the American Library Association. National Gaming Day @ your library All information about National Gaming Day for 2011 and beyond is now at . Learn Dance Party Grades 2+ | Blocks Minecraft Hour of Code A Minecraft Tale of Two Villages Grades 2+ | Blocks, Python Make a Flappy game

The Humble Store: Great games. Fantastic prices. Support charity. -60% OFF -60% Store Discount CA$33.04CA$13.21 CA$13.21 Add Buy Loading more great games... Error communicating with the server. Loading... Sorry, an error occurred. William Annin Middle School Who are you, what is your role and what class(es) do you teach Steven Isaccs, Teacher of 8th grade Video Game Design and Development. What versions of GameMaker do you use? Currently, GameMaker Studio. I've been teaching with GameMaker since version 4 :)

Laparoscopy Today: The Top Gun Laparoscopic Skills and Suturing Program As we stand at the dawn of a new century, it has been over 30 years since Kurt Semm initiated the era of operative laparoscopy. The entrance of general surgeons into the practice of minimal access surgery has accelerated the appearance of new applications and techniques. But as we bask in the glory of this achievement, a bittersweet residue hangs over what has been accomplished. At the 10th International Congress of the Society of Laparoendoscopic Surgeons in 2001, French gynecological surgeons reported that only 15% of their surgeons were routinely practicing advanced videoscopic procedures. Immortal Cities: Children of the Nile April 11th, 2013Children of the Nile on GoG Joining a host of classic strategy games, Children of the Nile (Complete Edition, including the Alexandria Expansion Pack) is now available on GoG. Download your copy today! Read GoG's announcement November 19th, 2012Children of the Nile in Thanksgiving bundle! For a limited time Children of the Nile (Enhanced Edition) is available on Indie Royale as part of a special Thanksgiving bundle. Check it out here!!

Rules of Play "Rules of Play is an exhaustive, clear, cogent, and complete resource for understanding games and game design. Salen and Zimmerman describe an encyclopedia of game design issues, techniques, and attributes. In particular, they analyze the elements that can make a game experience richer, more interesting, more emotional, more meaningful, and, ultimately, more successful. It should be the first stop you make when learning about game design." —Nathan Shedroff, author of Experience Design "Rules of Play makes a monumental contribution to the development of game theory, criticism, and design. GLEAMoscope - View the GLEAM survey and the sky at other wavelengths GLEAM is the new all-sky survey from the Murchison Widefield Array telescope in Western Australia. Based on Chromoscope, GLEAMoscope lets you explore our Galaxy (the Milky Way) and the distant Universe in a range of wavelengths from X-rays to down to the GLEAM frequencies of 72-231 MHz. Change the wavelength using the slider in the top right of the screen and explore space using your mouse. The GLEAM survey can now be found on Google Play for Android phones and tablets!