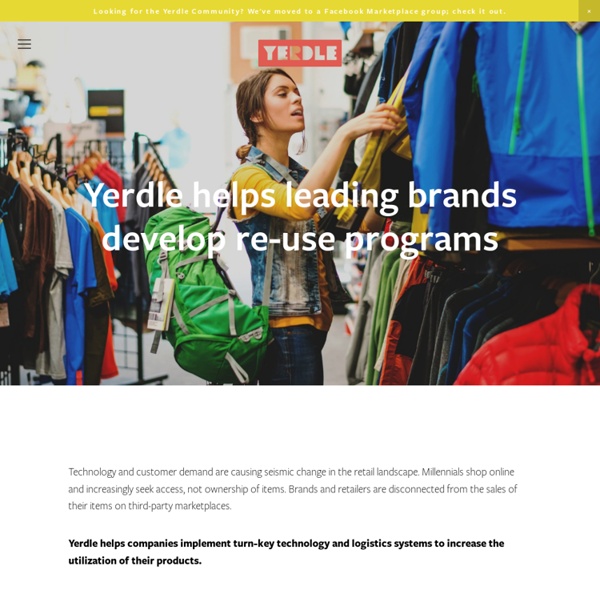 Plantoid: the blockchain-based art that makes itself Plantoid Plantoid (2015) by Okhaos is a self-creating, self-propagating artwork system that uses blockchain technology to gather and manage the resources it needs to become real and to participate in the artworld. Structured as a Decentralised Autonomous Organization (DAO), once it is set in motion the code of the Plantoid system combines the functions of artwork, artist and art dealer in a single piece of software.

yEd - Graph Editor yEd is a powerful desktop application that can be used to quickly and effectively generate high-quality diagrams. Create diagrams manually, or import your external data for analysis. Our automatic layout algorithms arrange even large data sets with just the press of a button. yEd is freely available and runs on all major platforms: Windows, Unix/Linux, and Mac OS X. World’s First Village To Adopt Blockchain In Its Farming & Management The small village of Kolionovo, outside of Moscow Russia, has become the first in the world to integrate Blockchain technology into its farming business and agriculture management. Kolionovo uses a decentralized Blockchain system for some local organizational, financial and legal issues. Moreover, people in this village launched their local cryptocurrency tokens called “Kolions” to manage their economy and business by themselves.

Highlights from the W3C blockchain workshop at MIT Do you have technology teams already involved in the W3C? Is your organization participating in a company or university innovation lab? You should. Primavera De Filippi Primavera De Filippi is a permanent researcher at the National Center of Scientific Research (CNRS) in Paris. She is faculty associate at the Berkman Center for Internet & Society at Harvard Law School, where she is investigating the concept of "governance-by-design" as it relates to online distributed architectures. Most of her research focuses on the legal challenges raised, and faced by emergent decentralized technologies —such as Bitcoin, Ethereum and other blockchain-based applications —and how these technologies could be used to design new governance models capable of supporting large-scale decentralized collaboration and more participatory decision-making. Academic career:

10 Unsung Business Leaders Changing the World Through Technology New technologies are created every day, but the impact of most of them is relatively minimal. In rare cases, however, one emerges that has the potential to change the world. A prime example is the blockchain. The blockchain began as the underlying platform of the digital currency Bitcoin but has since exploded in both significance and scope. Simply put, the radically transparent platform allows people to trade with each other in a way that bypasses the need for traditional contracts and intermediaries. The blockchain has the potential to transform everything we know about business.

Decentralization & Governance: Can Bitcoin Have the Best of Both? Ariel Deschapell is content manager for blockchain real estate startup Ubitquity, and a recent Henry Hazlitt fellow at the Foundation for Economic Education. In this opinion piece, Deschapell argues that in order to solve issues around decentralized governance, the blockchain community must ask difficult questions about what kind of decentralization solutions need. Since the earliest days of bitcoin, decentralization has been key to its value proposition. But it's also been its greatest obstacle. Whether it's the block size debate, or the ethereum classic debacle more broadly, decentralization in public blockchain networks presents significant hurdles to what can seem like straightforward objectives. After seven years of open-source study, decentralized governance remains a little explored and unsolved enigma.

Expanding the Internet Commons: The Subversive Potential of Wireless Community Networks by Primavera De Filippi[1] and Félix Tréguer[2] ‘Freedom is fostered when the means of communication are dispersed, decentralized, and easily available, as are printing presses and microcomputers. Central control is more likely when the means of communication are concentrated, monopolized, and scarce, as are great networks.’ (Sola Pool 1983, p. 5)

Broader Perspective: Blockchain Crypto-economics: The Actualization Economy of Immanence Phase I: P2P Economies There is considerable room for exploration in defining what the new possibility space of personalized, self-defined, emergent economic systems might comprise. Opening up economic systems could have different stages and phases. The first position could be having the same structure of current economic systems, but opening up the parties, interaction types, and business models. The idea of ‘decentralized reddit’ is an example of one such first position. It is still the same Internet pipes, providing the same news items to consumers.