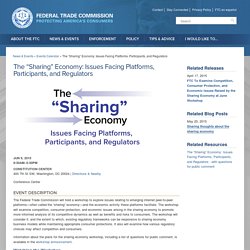 The workshop will examine competition, consumer protection, and economic issues arising in the sharing economy to promote more informed analysis of its competitive dynamics as well as benefits and risks to consumers. The workshop will consider if, and the extent to which, existing regulatory frameworks can be responsive to sharing economy business models while maintaining appropriate consumer protections. It also will examine how various regulatory choices may affect competition and consumers. In San Francisco, a battle over the 'hotelization' of neighborhoods. It's hard to find people here who are neutral about Airbnb, the explosively successful tech firm that has disrupted more than just the hotel business. 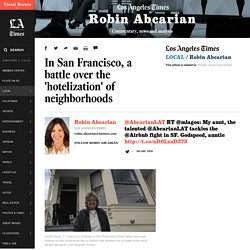 For five years, she has rented out the lower level of her home on Airbnb for $125 a night, earning a whole lot more than when she had a full-time tenant. Two miles away, in West Portal, Libby Noronha, a 66-year-old federal government retiree, told me she is not a fan of Airbnb. She soon learned that her next-door neighbor, a computer engineer, advertised three rooms of his house on Airbnb. "He has as many as six people coming and going, virtually all the time," she said. Pro-tenant groups scoff at that. In San Francisco, a battle over the &apos;hotelization&apos; of neighborhoods.

Sharing economy for water lets farmers lease excess resource to neighbors. Lake Powell is the second largest reservoir in the US, providing water to 40 million people across seven states. 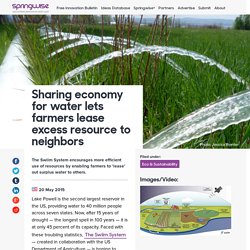 Now, after 15 years of drought — the longest spell in 100 years — it is at only 45 percent of its capacity. Faced with these troubling statistics, The Swiim System — created in collaboration with the US Department of Agriculture — is hoping to encourage more efficient use of agricultural resources, by enabling farmers to ‘lease’ out surplus water to others. Swiim stands for Sustainable Water and Innovative Irrigation Movement. The system includes a software suite which enables farms to operate more efficiently, by suggesting the best cropping inventory and irrigation techniques for each field according to the farmer’s needs and land.

The Swiim system is currently being implemented in Colorado, in part thanks to grants from the Colorado Water Conservation Board. Website: www.swiimsystem.com Contact: www.swiimsystem.com/contactus Spotted another good idea? Bike share users are mostly rich and white. Here's why that's hard to change. This article is part of a series about the past, present, and future of commuting in America. 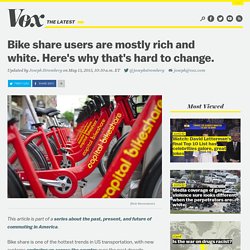 Lots of cities, like Philadelphia, are betting that they can do this. Most bike share riders are white, wealthy, and educated (STAN HONDA/AFP/Getty Images) (Mr. Open data, crowdsourcing, and sharing economy tech take on new roles in disasters. Sharing economy services and crowdsourced tech can help aggregate and distribute aid, housing, energy, and transportation to disaster survivors. 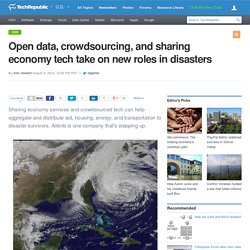 Airbnb is one company that's stepping up. In a disaster, figuring out what technology you have still works, how long it will work, and who knows how to use it is precious information. The idea of "disaster tech" is a vocative of that notion: what works when nothing else does? Last week, at a forum convened by the White House to share commitments from the private sector and to demonstrate data-driven innovation to helping people and disasters, I was reminded of that need. La sharing economy entra in azienda. Let Me Ride: The Uber Economy of Transport Sharing. It was Friday night’s dinner at a downtown Jakarta mall. 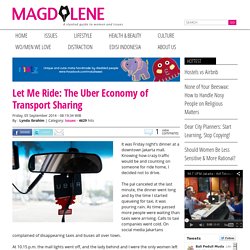 Knowing how crazy traffic would be and counting on someone for ride home, I decided not to drive. The pal canceled at the last minute, the dinner went long and by the time I started queueing for taxi, it was pouring rain. As time passed more people were waiting than taxis were arriving. A Libertarian Dream: The "Sharing Economy" <a class="icopyright-article-tools-noscript" href=" target="_blank" title="Main menu of all reuse options"><img height="25" width="27" border="0" align="bottom" alt="[Reuse options]" src=" Click here for reuse options! 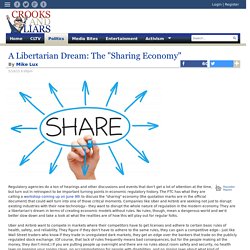 </a> Regulatory agencies do a ton of hearings and other discussions and events that don't get a lot of attention at the time, but turn out in retrospect to be important turning points in economic regulatory history. The FTC has what they are calling a workshop coming up on June 9th to discuss the "sharing" economy (the quotation marks are in the official document) that could well turn into one of those critical moments. Companies like Uber and Airbnb are seeking not just to disrupt existing industries with their new technology-- they want to disrupt the whole nature of regulation in the modern economy. They are a libertarian's dream in terms of creating economic models without rules. The Ten Commandments Of The New Economy. I’ve always thought of the Ten Commandments as history's first how-to guide for the way the members of a society were supposed to live their lives. 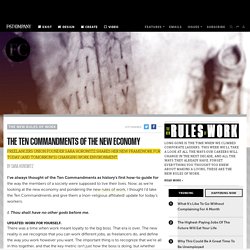 Now, as we’re looking at the new economy and pondering the new rules of work, I thought I'd take the Ten Commandments and give them a (non-religious affiliated) update for today’s workers. I. Thou shalt have no other gods before me. Updated: Work for yourself. Gig economy workers don't seem happy. Some call it the sharing economy. 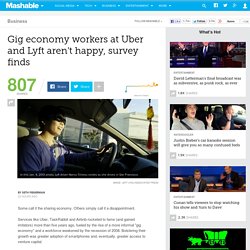 Others simply call it a disappointment. Services like Uber, TaskRabbit and Airbnb rocketed to fame (and gained imitators) more than five years ago, fueled by the rise of a more informal "gig economy" and a workforce weakened by the recession of 2008. Bolstering their growth was greater adoption of smartphones and, eventually, greater access to venture capital. The promise for users was convenience. The promise for employees, however, was something more powerful: freedom.

For many workers in this new industry, that turned out to be a false promise. Three quarters of those working in the gig economy say they chose their positions for the flexibility to work when and how they choose, according to a survey of more than 1,000 of these workers released Wednesday from a group of entrepreneurs affiliated with Stanford University. In the absence of those protections, employees shoulder considerable costs. 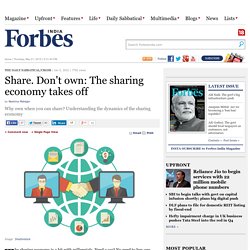 Need a car? No need to buy one. Hire one from Zipcar. Vacationing in Paris and need a place to bunk out for the night? No problem. Co-innoviamo tutto! - cheFare. The Sharing Economy: Knowing What's Right for You Tickets, San Francisco. Invalid quantity. Please enter a quantity of 1 or more. The quantity you chose exceeds the quantity available.

"All the ideas depend on technology to enable the trust between strangers. Because of the importance of reviews, so you know who you're doing business with, collaborative consumption has started to bring online real world assets like reputation, history, social capitol. Meet your neighbors, share stuff you already have, borrow things you don't need to buy - we love it!

La sharing economy entra in azienda. Visionless Abbott vacates the field on sharing economy - Media Release - Andrew Leigh MP. Adapting to the Sharing Economy. Instead of buying and owning products, consumers are increasingly interested in leasing and sharing them. Companies can benefit from the trend toward “collaborative consumption” through creative new approaches to defining and distributing their offerings.

How do consumers access, buy and use their favorite products and services? The answer to that seemingly simple question is changing. While individuals have traditionally often seen ownership as the most desirable way to have access to products, increasing numbers of consumers are paying to temporarily access or share products and services rather than buy or own them.1 This so-called “sharing economy” is growing rapidly. Growth in sharing systems has particularly been fueled by the Internet, with its rise of social media systems,3 which facilitate connections between peers eager to share their possessions. 1.

In the late 1990s, Hilti experienced sales losses to competitors’ inexpensive small tools. 2. Uk.businessinsider. Uber prices may go up after Australian Tax Office crackdown. Updated: Wednesday, May 20, 2015, 11:21 a.m. The sharing economy's tax free days Down Under are numbered. The Australian Tax Office (ATO) issued guidelines on Wednesday clarifying that individuals earning an income as part of sharing economy services like Uber may have to register for the 10% Goods and Services Tax (GST). Uber drivers are now regarded as providing a "taxi service" by the ATO, meaning drivers across Australia will have to register for the GST and apply for an Australian Business Number (ABN) by August 1.

GST obligations will apply regardless of turnover and from the very first customer. Customers may see their ride fares increase by 10%. Drivers who do not register could be liable for administrative penalties. This is a setback for Uber, which had previously taken the position its drivers did not have to register for GST. In a statement on its blog, Uber said it is "disappointed" in the ATO's ruling, and described it as relying on "outdated regulations. " Perché la sharing economy farà il successo di Expo (e 6 realtà da tenere d'occhio) "Uber" Your Cooking: The Sharing Economy Comes To Your Kitchen. The sharing economy – sizing the revenue opportunity. Introducing the “Sharing S-curve” We know from looking at the development path of sectors in the economy that many exhibit an ‘S-curve’ pattern.

Sharing economy: i nuovi scenari dell’economia collaborativa - Wired NextFest 2015. » Uber driver sacked for asking London passenger to perform oral sex. <a href=" per click advertising</a> An Uber driver has been accused of asking a female passenger if she wanted to perform oral sex on him. The driver allegedly asked if she liked the sex act and that he wanted to perform ‘sucky sucky’ on her. The incident happened in London in March and the victim has now released copies of the email exchange in which she was offered £20 on her account. She wrote: ‘Towards the end of the journey he was asking if I liked blow jobs, saying that he was very good at going down on girls or giving “sucky sucky” to girls and did I want him to do it to me.

‘He even suggested that he could pull over into a side street and do it now if I wanted, which was I think the scariest part of the drive.’ An Uber representative responded by returning her fare, adding £20 credit to her account and admitting that they were ‘already investigating this with [the driver] and I can assure you that the necessary actions will be taken to avoid a similar incident in future.’ Sharing economy, app e vino: le startup che scopri agli happy hour. Un fenomeno ancora di nicchia in Italia, ma con una crescita che fa ben sperare.

Nimber, the 'Airbnb for sending stuff' arrives in the UK. TREND: Sharing is caring, and lucrative - Finweek. Welcome to Forbes. The Service Provider’s Perspective on the Sharing Economy. Why I rent everything: From clothes to jewelry - May. 13, 2015. The Sharing Economy: How shared self-driving cars could change city traffic. The Airbnb of Solar Launches Solar-Sharing Network.

The Sharing Economy: What It Means For Authors - Author Unlimited - The “Sharing” Economy, Uber, and the Triumph of Neo-Liberalism – George Ritzer.