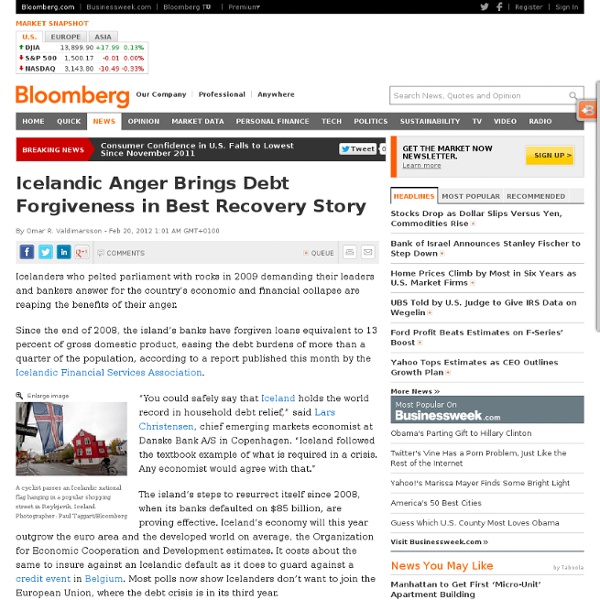 Icelanders who pelted parliament with rocks in 2009 demanding their leaders and bankers answer for the country’s economic and financial collapse are reaping the benefits of their anger. Since the end of 2008, the island’s banks have forgiven loans equivalent to 13 percent of gross domestic product, easing the debt burdens of more than a quarter of the population, according to a report published this month by the Icelandic Financial Services Association. “You could safely say that Iceland holds the world record in household debt relief,” said Lars Christensen, chief emerging markets economist at Danske Bank A/S in Copenhagen. “Iceland followed the textbook example of what is required in a crisis. Any economist would agree with that.” The island’s steps to resurrect itself since 2008, when its banks defaulted on $85 billion, are proving effective. Crisis Lessons People Vs Markets Activists say the banks should go even further in their debt relief. Fresh Demands Legal Aftermath

Vincent Browne Vs Troika: Video And Transcript Troika (EU, ECB & IMF) representatives, and Barbara Nolan, head of the European Commission representation in Ireland, held a press conference on the latest bailout review this afternoon. Participants: Klaus Masuch, head of EU Countries Division at the European Central Bank Istvan Szekely, director of economic and financial affairs at the European Commission Craig Beaumont, mission chief for Ireland at the IMF. Early in the conference, Istvan Szekely said: “I’m impressed by the depth of the discussion in Ireland and the understanding of complex, economic financial-sector issues, which is revealed by looking into the Irish place, looking into the discussion. Barbara Nolan: “Well, well, well, can we take a couple together? Nolan: “Right, can I ask you then to pass the mic, and we’ll come back to you for the second question?” Masuch: “I have answered a very similar question of you – I think it was two reviews ago – and can…”

The Next American Revolution Won't Be Like the First - Wendy McElroy One of my friends believes that a second American revolution is imminent and will be sparked by the economic instability now rocking the continent. Frankly, I doubt it. Insurrections may occur, but I expect the US government to lumber along, dragging the world deeper into poverty and conflict for many years to come. Upon hearing my friend out, however, my first thought was, "if a revolution erupts, it will resemble the French one of 1789 more closely than the American one of 1776." One of the reasons for thinking that America might be "going French" is that current American society resembles descriptions I've read of pre-Revolution France more closely than America now resembles its young self. Consider the issue of a class structure. Sick unto death of being arrested for such sins as speaking their own language, the Irish fled to North America even though they risked a 50 percent chance of dying in transit or in the initial hardships of the New World.

The politics of pensions | UC Steve Cushion Crisis? What crisis? Prophets of doom in the government and their supporters in the press are currently issuing dire warnings that there is a crisis in the provision of pensions because we are all living longer. This, we are told, can only be resolved if pensionable age is raised, benefit levels curbed and contributions from employees are increased. The recently published Green Paper states that life expectancy is 89 for men and 90 for women. There is considerable evidence, however, which links life expectancy to income. State Pension The existing basic state pension was set up in 1948 as part of the post war welfare reforms. Right-wing ideologues associated with the banks and insurance companies mounted a campaign against any attempt to use the surplus in the National Insurance Fund for economic intervention in housing or job creation, condemning this possibility as ‘state socialism’ – if only. Occupational pensions Private pension schemes Green Paper Teachers’ Pensions

Coalition of Resistance Against Cuts & Privatisation | A coalition of groups fighting cuts and privatisation 8 Reasons Young Americans Don't Fight Back: How the US Crushed Youth Resistance The ruling elite has created social institutions that have subdued young Americans and broken their spirit of resistance.Bruce E. LevineAlterNet Traditionally, young people have energized democratic movements. So it is a major coup for the ruling elite to have created societal institutions that have subdued young Americans and broken their spirit of resistance to domination. Young Americans—even more so than older Americans—appear to have acquiesced to the idea that the corporatocracy can completely screw them and that they are helpless to do anything about it. How exactly has American society subdued young Americans? 1. There was no tuition at the City University of New York when I attended one of its colleges in the 1970s, a time when tuition at many U.S. public universities was so affordable that it was easy to get a B.A. and even a graduate degree without accruing any student-loan debt. 2. 3. 4. 5. 6. The fear of being surveilled makes a population easier to control. 7. 8.

The Price of Inequality by Joseph Stiglitz – review | Books | The Observer An Occupy London protester outside the Bank of England. Photograph: Andy Rain/EPA The ancient Greeks had a word for it – pleonexia – which means an overreaching desire for more than one's share. As Melissa Lane explained in last year's Eco-Republic: Ancient Thinking for a Green Age, this vice was often paired with hubris, a form of arrogance directed especially against the gods and therefore doomed to fail. The Greeks saw tyrants as fundamentally pleonetic in their motivation. The Price of Inequality: The Avoidable Causes and Invisible Costs of Inequality by Joseph Stiglitz In The Price of Inequality, Joseph E Stiglitz passionately describes how unrestrained power and rampant greed are writing an epitaph for the American dream. In 2001, Stiglitz, a former chief economist at the World Bank, and arch critic of the IMF, won the Nobel prize for economics for his theory of "asymmetric information". For roughly 30 years after the second world war, the 1% had a steady share of the US cake.

Firebox: Politics with your panini by Firebox London Launched in October 2012, Firebox is a fantastic new project in the heart of King's Cross. We provide a welcoming space where progressive movements, local residents and left-leaning people can come together to learn about politics and organise campaigns. Pop in for lunch and you'll discover second-hand books (on anything from the politics of disability to the history of trade unions), the opportunity to get involved in a range of campaigns, inspiring radical artwork and exciting weekly events. Of course, you'll also get a delicious meal, with our constantly evolving menu reflecting our wonderfully diverse location. You can pick up everything from a Bengali omelette to a full English, with a iced Greek frappe or syrupy Turkish baklava along the way. Time Out loved our 'radical chic', and veteran activist Tony Benn cut the ceremonial ribbon and opened our little cafe in October. The target we've set would allow us to do all of the following: