The Rise of the Sharing Economy 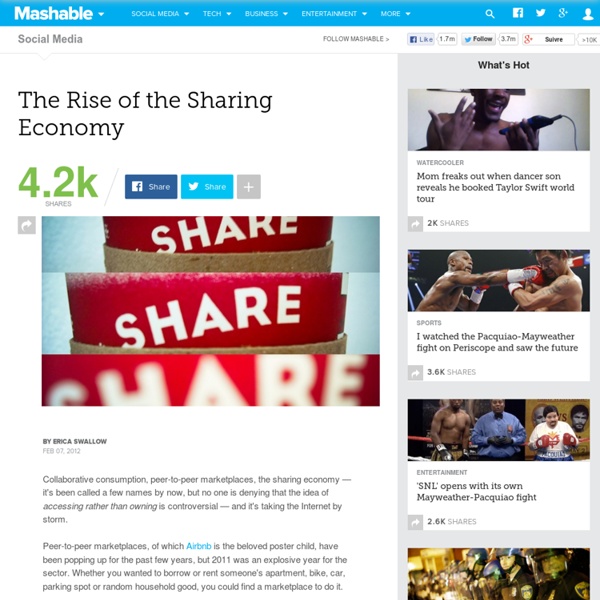 Collaborative consumption, peer-to-peer marketplaces, the sharing economy — it's been called a few names by now, but no one is denying that the idea of accessing rather than owning is controversial — and it's taking the Internet by storm. Peer-to-peer marketplaces, of which Airbnb is the beloved poster child, have been popping up for the past few years, but 2011 was an explosive year for the sector. Whether you wanted to borrow or rent someone's apartment, bike, car, parking spot or random household good, you could find a marketplace to do it. This is only the beginning, though; 2012 looks to be a promising year for those involved with the sharing economy. Super angel Ron Conway recently identified it as 2012's hot area for angel investment in The Economist. And Fast Company deemed 2012 the "year of peer-to-peer accommodations," thanks to the emergence of Airbnb clones that hinged off of the company's outstanding growth. It's All About Value Knodes and SnapGoods founder Ron J. Renting vs.

Caravanserai A caravanserai was a roadside inn where travelers could rest and recover from the day's journey. Caravanserais supported the flow of commerce, information, and people across the network of trade routes covering Asia, North Africa, and southeastern Europe, especially along the Silk Road. These were found frequently along the Persian Empire's Royal Road, a 2,500-kilometre (1,600 mi) long ancient highway that stretched from Sardis to Susa according to Herodotus: "Now the true account of the road in question is the following: Royal stations exist along its whole length, and excellent caravansaries; and throughout, it traverses an inhabited tract, and is free from danger.

“Towards a Cooperative, Small scale, Local, P2P Production Future” – back from the OuiShare Summit in Paris « Meedabyte (Italian translation of the post follows here – La traduzione in italiano è disponibile qui) I’m fresh back from the first OuiShare Summit in Paris – that has been held in the wonderful coworking space “La Mutinerie” - where I had the amazing opportunity to gave a talk entitled “Towards a cooperative, small scale, local, p2p production Future” in which I really tried to connect the dots over a bunch of topics, amazing authors and also writings that I’ve done on my own, especially the latest three on the blog. OuiShare initiative was born in Paris during 2010 mostly thanks to the energy and sociablity of Antonin Leonard following the global wave of interest around two seminal books that have been published those days: Rachel Botsman’s and Roo Rogers’ “What’s mine is yours” and Lisa Gansky’s “The Mesh”. The paradigm of cooperation is, indeed, one – probably the only one – credible alternative that our global society should tackle in pursuit of a future of some kind. Like this:

There's An App For That App A firm called SOASTA, which dubs itself the "leader in cloud-based performance and functional testing" has some news today about a release of its CloudTest Platform--something that "for the first time" allows "functional test automation for continuous multi-touch, gesture-based mobile applications." Multitouch, gestures, apps, and the cloud all in one thing--it's a tech writer's heaven. Within the news, though, are a couple of important trends, connected to the development of smartphone and tablet technology. SOASTA's tech is based on something it's called TouchTest, and the idea is to very precisely "capture and playback" all of the "continuous touch gestures including pan, pinch, zoom, and scroll" that you may get up to if you're an owner of an iDevice or an Android phone or tablet. Alongside this it's got a Private Device Cloud system that lets you use the devices you already own to test "end user experiences from real devices around the world."

Collaborative Logistics: Ripe for Disruption I am frequently asked what sectors I think will be next in terms of being disrupted by collaborative business models. Pet care? Mortgages? Parking? It’s a hard space to crack but I think 2015 will be the year we see some big things happen in collaborative logistics, especially shipping. A useful lens I have developed to identify big opportunities is to look at where two key problems exist: Transportation innovation: How Lyft and SideCar are changing commuting This feature originally ran on July 15, 2012. Update: We reported in July on the rise of two San Francisco ridesharing startups, Lyft and SideCar. Both companies have since expanded their reach in the Bay Area, and have yet to run into any thorny legal issues so far. These ride-sharing companies claim that they are not taxi companies, even though they act very similar to taxi companies.

ci23.actonsoftware.com/acton/rif/2176/s-0036-1202/-/l-0039:3086/l-0039/showPreparedMessage Intelligent Image and Video Search Image and full motion video content are among the fastest growing digital assets for government and commercial enterprises, yet over 95% of this content, particularly full motion video, goes unviewed and unexploited for important information. While a range of advanced tools exists to support text and web-based data search and analysis, government and commercial enterprises currently have no viable solutions for indexing and searching image and full motion video content. Provides the ability to search for objects, text, and human faces within images and video (this is not OCR)Is the only general purpose image and full motion video search engine to offer its solution in an enterprise class, highly scalable intel-based computing platformOffers a powerful event based alerting system that allows users to set standing queries for important information in images and/or video and provides an alert when a match occurs Sincerely,

The nature and potential of the collaborative economy The collaborative economy is expanding, developing, and gaining more traction, and has surpassed the threshold of simply a fad or passing trend. More companies are emerging which are based on the principles of sharing, for both experiences or resources. Coworking and its gradual adaption into widely understood work practices is just one example. As it becomes more prevalent, more conversations regarding the movement take place. This often fosters an inclination to define the phenomenon. But how can we define the collaborative economy? 5 Signs of a Great User Experience If you've used the mobile social network Path recently, it's likely that you enjoyed the experience. Path has a sophisticated design, yet it's easy to use. It sports an attractive red color scheme and the navigation is smooth as silk.

A Glossary of Emerging Terms in the Collaborative Economy Photo :”Conversation” by Steve Bridger, used with Creative Commons license. Buzzwords, buzzwords, buzzwords! Nothing is more fun than using buzzwords – except one thing: Reading all the buzzwords on a single page. Wall Street Journal Cold Shoulders Co-ops The Wall Street Journal has the widest circulation of any paper in the United States, particularly famous for its coverage of business. And while it may not be surprising, new research by Gar Alperovitz and Keane Bhatt shows the dissapointing fact that the paper barely pays attention to workers cooperatives. In an article entitled “Revealed: Wall Street Journal More Interested in Caviar and Foie Gras Than Employee-owned Firms”, Alperovitz and Bhatt demonstrate the ways that the Wall Street Journal systematically covers the concerns of the rich while ignoring the flourishing solidarity economy.