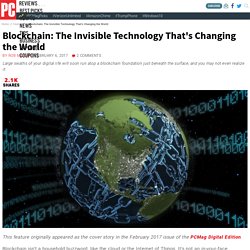 Blockchain isn't a household buzzword, like the cloud or the Internet of Things. It's not an in-your-face innovation you can see and touch as easily as a smartphone or a package from Amazon. But when it comes to our digital lives—every digital transaction; exchange of value, goods and services; or private data —blockchain is the answer to a question we've been asking since the dawn of the internet age: How can we collectively trust what happens online?

Every year we run more of our lives—more core functions of our governments, economies, and societies—on the internet. We do our banking online. Blockchain always has an immutable "ledger" that you can see, verify, and control. First up are the big banks and tech giants. Beyond Bitcoin. Our Team. Bitcoin and Blockchain Events and Conferences. The Blockchain Practice. Blockchain POV. Overview You may have read about Bitcoin or heard about it at a ‘FinTech’ conference. 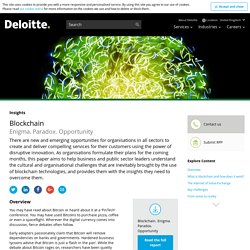 You may have used Bitcoins to purchase pizza, coffee or even a spaceflight. Wherever the digital currency comes into discussion, fierce debates often follow. Early adopters passionately claim that Bitcoin will remove dependencies on banks and governments. Hardened business tycoons advise that Bitcoin is just a ‘flash in the pan’. This is the realm of the blockchain – a protocol for exchanging value over the internet without an intermediary – and there is a growing buzz about how it might transform not just banking but many other industry sectors, too. In our view, there are new and emerging opportunities for organisations in all sectors to create and deliver compelling services for their customers using the power of disruptive innovation. Event Calendar – BECON. The Block Chain Access project. “This is how blockchain will change your life” plus 8 other items re: blockchain.

This is how blockchain will change your life — from medium.com by Don Tapscott and Alex Tapscott. 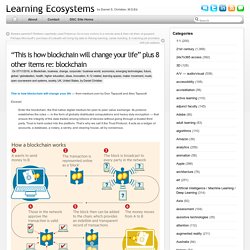 The Blockchain Summit - Marketforce Blockchain Conference. Marketforce ("we", “us” or “our”) is committed to protecting and respecting your privacy and that of all our customers and people who request details about our products and services. 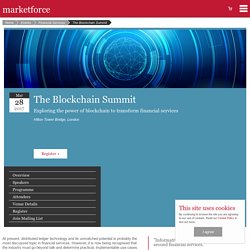 There are areas of our website which require you to have an account or provide your contact details in order to access information about our products and services or products or services of our sponsors or media partners. This Privacy and Cookies policy, together with our terms and conditions (www.marketforce.eu.com/legal/ticket-registration-tcs) and any other documents referred to in it, sets out the basis on which any personal data we collect from you, or that you provide to us, will be processed by us. Please read the following carefully to understand our views and practices regarding your personal data and how we will treat it. Developers Are Flocking to Blockchain Bootcamps - Bloomberg. A year ago, 27-year-old software developer Roy Breidi was dreaming of launching a startup related to the digital currency bitcoin. 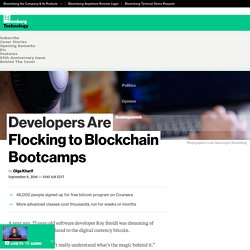 Problem was, he “didn’t really understand what’s the magic behind it.” So he took an online course called “Bitcoin and Cryptocurrency Technologies” from Coursera. It’s one of many workshops and bootcamps popping up to help people in all industries -- especially software developers -- get the hang of the blockchain, the technology underlying bitcoin, and parlay that knowledge into more exciting, and sometimes better-paying jobs. Within months, Breidi had quit his job and started working full time at Shake, which lets people spend with a bitcoin-based debit card. Recently, the company won funding from Boost VC, and Breidi, co-founder and chief technology officer, moved to San Mateo, California, where his backers provided temporary housing and an office. 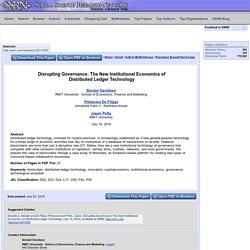 The 10 Best And Worst Ways To Look For A Job. By Richard N. 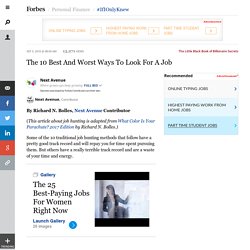 Bolles, Next Avenue Contributor (This article about job hunting is adapted from What Color Is Your Parachute? 2017 Edition by Richard N. Bolles.) Some of the 10 traditional job hunting methods that follow have a pretty good track record and will repay you for time spent pursuing them. The success rate figures cited are a mash of studies I’ve seen, plus, where no studies have been done, my own impressions over the past 45 years of working with job hunters or career changers and writing What Color Is Your Parachute?

Blockchain and the new face of decentralization. This post was co-authored with Griffin Anderson, founder of Blockchain as a Platform. 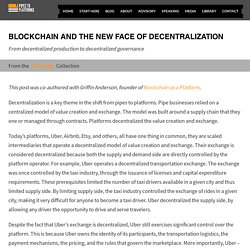 Decentralization is a key theme in the shift from pipes to platforms. Pipe businesses relied on a centralized model of value creation and exchange. The model was built around a supply chain that they one or managed through contracts. MoneyLab: Economies of Dissent. Report from ‘blockchain for social good‘ workshop at European Commission in June 2016 On 21st June the Digital Single Market Council (a division of EU parliament) invited the full cavalry of blockchain and bitcoin advocates to Brussels to discuss the future of distributed ledger technology (DLT). 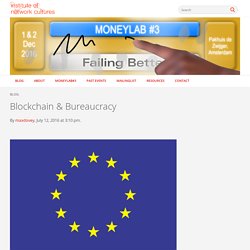 The room was packed full of entrepreneurs, business people and middle management consultants all demonstrating an interest into blockchain technology, and how they can get to grips with the new technology to turn blockchain into a ‘technology for social good’. I was immediately surprised by the imperative taken by EU council to host such an event as it shows that blockchain advocates have clearly kicked up enough of a storm to reach the agenda of European Parliament. 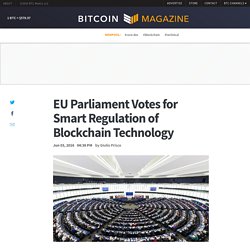 Following the vote, unnamed sources told Ars Technica that European Commission staffers are working hard to understand the distributed ledger technology behind virtual currencies ‒ seven years after the launch of Bitcoin, with venture capital investments now totalling more than €1 billion. The MEPs voted in a proposal, set out in a resolution (a short summary is also available) drafted by Jakob von Weizsäcker, which suggests that a new task force, which would be overseen by the European Commission, should build expertise in the underlying technology of virtual currencies.

The proposal, which was passed by 542 votes to 51, with 11 abstentions, will now be sent to the European Commission. The proposal clearly states that distributed ledger technology should not be stifled by regulation at this early stage. Photo David Iliff / Wikimedia. Berkman Klein Center. MoneyLab: Economies of Dissent. Blockchain Buzz — shareNL. One sentence came up over and over again during the OuiShare Fest 2016"I want to go to this panel about the blockchain… I really need to understand this thing.

" Everybody seemed to be keen on getting a better understanding of blockchain technology - no matter if experts in their own field or just a curious participant. At the largest European conference on the collaborative economy, the diversity of the collaborative movement showed in many ways. While some people gathered in a tiny tent to discuss the application of Permaculture in our daily lives and our own organisations, many stayed at the main stage to hear about the next big thing - the blockchain - and how this somehow is really important for the future of the collaborative economy. As a newbie to anything that has to do with "tech" I am intimidated when the conversation revolves around bitcoins, blockchains, smart contracts, and DAOs.

Distributed Ledger Technology (DLT) is not just Blockchains and Blockchains is not just Bitcoin. Experts are saying that the Internet will come to be seen as the background technology that made distributed ledger applications possible. Will DLT really bring a more profound change to our societies over the next ten years than the internet has over the past ten? All audio recordings from the event can be accessed here. William Mougayar. Decentralization & Governance: Can Bitcoin Have the Best of Both? Ariel Deschapell is content manager for blockchain real estate startup Ubitquity, and a recent Henry Hazlitt fellow at the Foundation for Economic Education.

In this opinion piece, Deschapell argues that in order to solve issues around decentralized governance, the blockchain community must ask difficult questions about what kind of decentralization solutions need. Since the earliest days of bitcoin, decentralization has been key to its value proposition. But it's also been its greatest obstacle. Whether it's the block size debate, or the ethereum classic debacle more broadly, decentralization in public blockchain networks presents significant hurdles to what can seem like straightforward objectives.

Blockchain 101 – BLOCKCON. Blockchain 101 – BLOCKCON. Global Blockchain Projects – BLOCKCON. Sabir. Sabir. UCL RESEARCH CENTRE#FOR BLOCKCHAIN TECHNOLOGIES. Plantoid: the blockchain-based art that makes itself. Plantoid Plantoid (2015) by Okhaos is a self-creating, self-propagating artwork system that uses blockchain technology to gather and manage the resources it needs to become real and to participate in the artworld. Structured as a Decentralised Autonomous Organization (DAO), once it is set in motion the code of the Plantoid system combines the functions of artwork, artist and art dealer in a single piece of software. As its name implies, the physical Plantoid artworks are cyborg-looking welded sculptures of flowering plants. Flowers are a popular icon of naturalised aesthetics in art and culture. Their aesthetic and art historical appeal makes them an effective subject for subversion. Sydney 2015 - Keynote - Thinking Through Law and Code, Again - Lawrence Lessig.

Blockchain Workshops. Panel: Future of Decentralization What role for the legal system - COALA's Blockchain Workshops. Plantoid: the blockchain-based art that makes itself. World’s First Village To Adopt Blockchain In Its Farming & Management. Highlights from the W3C blockchain workshop at MIT. Do you have technology teams already involved in the W3C? Is your organization participating in a company or university innovation lab? You should. Primavera De Filippi. Primavera De Filippi is a permanent researcher at the National Center of Scientific Research (CNRS) in Paris. She is faculty associate at the Berkman Center for Internet & Society at Harvard Law School, where she is investigating the concept of "governance-by-design" as it relates to online distributed architectures. Expanding the Internet Commons: The Subversive Potential of Wireless Community Networks. Broader Perspective: Blockchain Crypto-economics: The Actualization Economy of Immanence.

Phase I: P2P Economies There is considerable room for exploration in defining what the new possibility space of personalized, self-defined, emergent economic systems might comprise. Opening up economic systems could have different stages and phases. Broader Perspective: Crypto Enlightenment: A Social Theory of Blockchains. Berkman Klein Center. Samer Hassan is an activist and researcher, currently Assistant Professor at Universidad Complutense de Madrid (Spain). As a Berkman Fellow, he will focus on interdisciplinary research around distributed systems (e.g. blockchain) that may facilitate the sustainability of Commons-based peer production communities and their contributors (e.g. gratitude-based rewards). W3C Blockchains and the Web Workshop. Academics - Institute for Blockchain Studies Website. Academics - Institute for Blockchain Studies Website. The future will be decentralized.