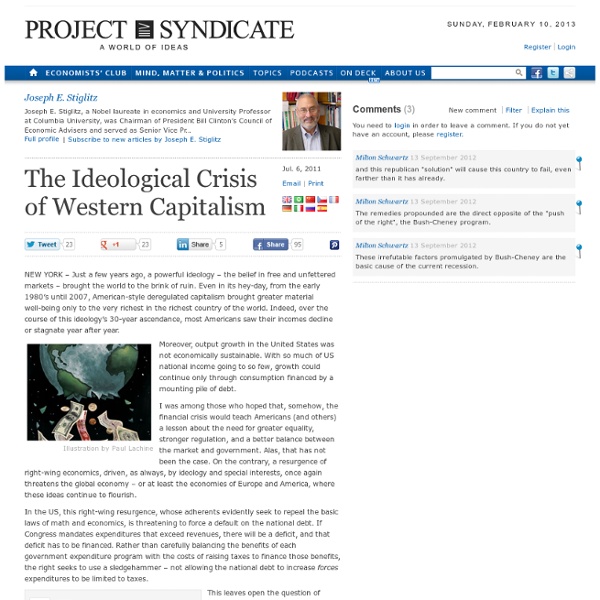 Exit from comment view mode. Click to hide this space NEW YORK – Just a few years ago, a powerful ideology – the belief in free and unfettered markets – brought the world to the brink of ruin. Moreover, output growth in the United States was not economically sustainable. I was among those who hoped that, somehow, the financial crisis would teach Americans (and others) a lesson about the need for greater equality, stronger regulation, and a better balance between the market and government. In the US, this right-wing resurgence, whose adherents evidently seek to repeal the basic laws of math and economics, is threatening to force a default on the national debt. This leaves open the question of which expenditures get priority – and if expenditures to pay interest on the national debt do not, a default is inevitable. A decade ago, in the midst of an economic boom, the US faced a surplus so large that it threatened to eliminate the national debt. But matters are little better in Europe. Related:  What means neoliberalism

Executive Excess 2011: The Massive CEO Rewards for Tax Dodging Guns don’t kill people, the old saw goes. People do. By the same token, corporations don’t dodge taxes. People do. The people who run corporations. And these people — America’s CEOs — are reaping awesomely lavish rewards for the tax dodging they have their corporations do. In fact, corporate tax dodging has gone so out of control that 25 major U.S. corporations last year paid their chief executives more than they paid Uncle Sam in federal income taxes. This year’s Institute for Policy Studies Executive Excess report, our 18th annual, explores the intersection between CEO pay and aggressive corporate tax dodging. We researched the 100 U.S. corporations that shelled out the most last year in CEO compensation. Corporate outlays for CEO compensation — despite the lingering Great Recession — are rising. This contrast shows up starkly in the 2010 ratio between average worker and average CEO compensation. What are America’s CEOs doing to deserve their latest bountiful rewards?

Our Economic Ruin Means Freedom for the Super-Rich by George Monbiot The model is dead; long live the model. Austerity programmes are extending the crises they were meant to solve, yet governments refuse to abandon them. The United Kingdom provides a powerful example. The cuts, the coalition promised, would hurt but work. They hurt all right – and have pushed us into a double-dip recession. This result was widely predicted. Two questions arise. Surely the corporate class and the super-rich – the only people the government will listen to – can see that these policies are destroying the markets on which their wealth relies? To understand this conundrum we should first understand that what is presented as an economic programme is in fact a political programme. Neoliberals claim that we are best served by maximising market freedom and minimising the role of the state. As Colin Crouch shows in The Strange Non-Death of Neoliberalism, the state and the market are not, as neoliberals insist, in perpetual conflict. So where is the economic elite?

Hopeless but not Serious | Grover Norquist Norquist is just another opportunistic parasite in Washington, the host for so many parasites. Most of them don’t rise as high and have less influence, but they all have the same quality — an avaricious greed, which they claim to be an expression of ‘public interest’. And people like Norquist (or like Abramoff, Rove, Reed, DeLay, Gingrich) have worked to change the game in Washington. There’s always been “enlightened self-interest” and corruption in centers of power, but a certain amount of ‘People’s Business’ had to be conducted. Now, the game is more about seizing all the power, and money, that one can… all while loudly claiming your efforts are for the benefit of others. Liars and thieves love misdirection — except now, unlike the pre-Rupert era, they have an entire media empire ready to repeat their messages and throw sand in everyone’s eyes.

Debt deal: anger and deceit has led the US into a billionaires' coup | George Monbiot There are two ways of cutting a deficit: raising taxes or reducing spending. Raising taxes means taking money from the rich. Cutting spending means taking money from the poor. Not in all cases of course: some taxation is regressive; some state spending takes money from ordinary citizens and gives it to banks, arms companies, oil barons and farmers. But in most cases the state transfers wealth from rich to poor, while tax cuts shift it from poor to rich. So the rich, in a nominal democracy, have a struggle on their hands. Partly as a result of the Bush tax cuts of 2001, 2003 and 2005 (shamefully extended by Barack Obama), taxation of the wealthy, in Obama's words, "is at its lowest level in half a century". The deal being thrashed out in Congress as this article goes to press seeks only to cut state spending. The immediate reason is that Republican members of Congress supported by the Tea Party movement won't budge. So who or what is Americans for Prosperity? Are they stupid?

The second death of politics The recent rise of technocratic governments in Italy and Greece is the culmination of a process that has been unfolding in Europe over the last 20 years. Since the collapse of the Soviet Union and the subsequent triumph of neoliberal ideology, there has been a trend toward de-politicisation, a wholehearted embrace of the neoliberal order apparently devoid of a viable and promising alternative. Politics died its first death in celebrations of a growing consensus that communism was a thing of the past, sealed by Francis Fukuyama's diagnosis of the end of history. Apparently lacking a clear enemy, neoliberalism was ready solemnly to declare its worldwide hegemony. To be sure, we also observed flashes of political polarisation in the post-9/11 world. It is, in the first instance, this crisis of ideology that explains much of what is going on in Europe (and, to a lesser extent, in the United States) today. Technocratic regimes 'Politics without politics'

Why are we debating cuts to Social Security? - Opinion The Washington elites apparently believe that we are in the worst downturn since the Great Depression because of free spending seniors running wild with their Social Security cheques. What else could explain their obsession with cutting Social Security benefits? The fashionable cut these days is adopting a "chained" consumer price index for the annual cost of living adjustment. This chained index would reduce the size of the adjustment by 0.3 percentage points annually. This cut is especially pernicious. Since it is cumulative, it would hit the oldest of the elderly hardest. Of course, Social Security is supposed to be off-budget so it really should not even be included in budget negotiations. Burden on the economy In the long-term, Social Security is projected to face a shortfall that will have to be dealt with in the decades ahead. But the bigger question is why the President and Congress are even discussing such nonsense at all? Current political situation

Age of Fracture - Daniel T. Rodgers In the last quarter of the twentieth century, the ideas that most Americans lived by started to fragment. Mid-century concepts of national consensus, managed markets, gender and racial identities, citizen obligation, and historical memory became more fluid. Flexible markets pushed aside Keynesian macroeconomic structures. Racial and gender solidarity divided into multiple identities; community responsibility shrank to smaller circles. Age of Fracture offers a powerful reinterpretation of the ways in which the decades surrounding the 1980s changed America. Cutting across the social and political arenas of late-twentieth-century life and thought, from economic theory and the culture wars to disputes over poverty, color-blindness, and sisterhood, Rodgers reveals how our categories of social reality have been fractured and destabilized.

Wage slavery Wage slavery refers to a situation where a person's livelihood depends on wages or a salary, especially when the dependence is total and immediate.[1][2] It is a pejorative term used to draw an analogy between slavery and wage labor by focusing on similarities between owning and renting a person. Similarities between wage labor and slavery were noted as early as Cicero in Ancient Rome.[11] With the advent of the industrial revolution, thinkers such as Proudhon and Marx elaborated the comparison between wage labor and slavery in the context of a critique of societal property not intended for active personal use,[12][13] while Luddites emphasized the dehumanization brought about by machines. Treatment in various economic systems[edit] Adam Smith noted that employers often conspire together to keep wages low:[24] Capitalism[edit] and secondarily on: Communism[edit] Both American and Russian media described the USSR as a communist or socialist society. Fascism[edit] Psychological control[edit]