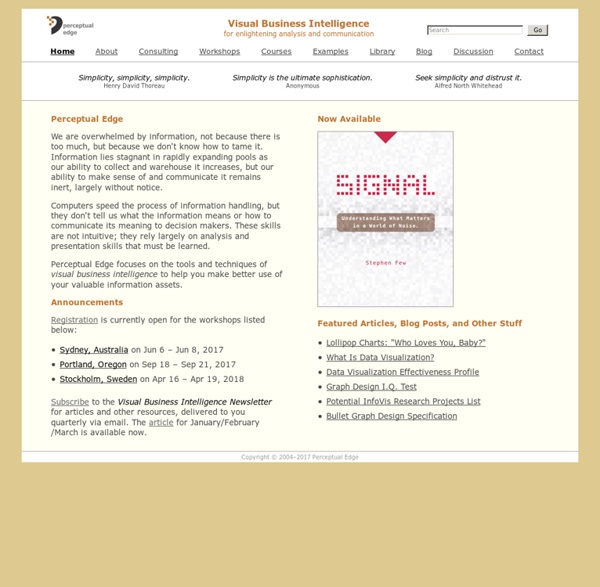 Perceptual Edge We are overwhelmed by information, not because there is too much, but because we don't know how to tame it. Information lies stagnant in rapidly expanding pools as our ability to collect and warehouse it increases, but our ability to make sense of and communicate it remains inert, largely without notice. Computers speed the process of information handling, but they don't tell us what the information means or how to communicate its meaning to decision makers. These skills are not intuitive; they rely largely on analysis and presentation skills that must be learned. Perceptual Edge focuses on the tools and techniques of visual business intelligence to help you make better use of your valuable information assets.

AnalyticsZone Presents: Creating Effective Visualization Series with Noah Iliinsky The world produces more than 2.5 exabytes of data every day. Visualization is one key approach to gaining insight from this flood of big data. Visualization makes data accessible, and is one of the best ways to analyze and understand the huge volumes that we're accumulating.

How to Win 5 State Fair Games It’s state fair time once again all over the country. And that means Ferris wheels, giant turkey legs, a visit from the world’s smallest horse, and, of course, the chance to try your hand at winning the carnival games that line the midway. If you love playing these games at the state fair, but usually find yourself walking away from the booths empty-handed or with a dinky Chinese finger trap as a consolation prize, then this post is for you. Step right up, gentlemen! Today you’re going to learn the secrets to beating the carnies and winning a giant stuffed animal for your gal. General Guidelines

InfoVis Group @ UBC Computer Science 06/2016 [talks]: Information+ Keynote, Lightning Talks Tamara Munzner gave a keynote talk entitled Visualization Analysis and Design at Information+, June 16 - 18, 2016 in Vancouver BC, Canada. Also at Information+, recent group alum Johanna Fulda gave a lightning talk entitled What’s up with Data Journalism in Canada? and visiting PhD student Georges Hattab gave a lightning talk on A Mnemonic Card Game for your Amino Acids, which also appeared in the Information+ Exhibition at Emily Carr University of Art + Design. AnalyticsZone Blog Guest post from Noah Iliinsky, Advanced Visualization Expert, IBM Center for Advanced Visualization This is the first of a series of five posts discussing the four pillars of successful visualizations. In this article I’ll introduce the four pillars and discuss why they’re in the order they’re in; and then in subsequent posts I’ll examine each pillar in depth and explain how to think about and use the concepts when building an effective data visualization. A successful visualization: > has a clear purpose and focus

Researchers uncover Tor-powered Skynet botnet Rapid7 researchers have recently unearthed an unusual piece of malware that turned out to be crucial to the formation of an elusive botnet - dubbed Skynet by the researchers - whose existence has been documented in a very popular Reddit "I Am A" thread. The Trojan in question has DDoS and Bitcoin-mining capabilities, but it's main function is to steal banking credentials. The botnet operator spreads the malware via the Usenet discussion forum, which is also a popular platform for distributing pirated content. In order to hide its malicious nature, the file "weighs" 15MB, a great part of which is junk data. The rest consists of a ZeuS bot, a Tor client for Windows, the CGMiner bitcoin mining tool, and a copy of a DLL file used by CGMiner for CPU and GPU hash cracking.

Resources: InfoVis @ UBC CS R / Shiny Shiny is an R package used to generate web applications containing interactive data analysis and visualization elements. No knowledge of HTML, CSS, JavaScript is required. Code is written in R. → Learn Shiny RStudio's 7 lesson tutorial. → Include static visualizations made with the ggplot2 package. AnalyticsZone Blog Guest post by Noah Iliinsky, IBM visualization luminary. This is a continuation of a series of posts covering the Four Pillars of Visualization. Please read my previous article , which describes these pillars as: purpose, content, structure and formatting. This post focuses on the first of these.

What the 2013 Verizon Data Breach Report tells us about phishing When I was a kid I’d thumb through my parents’ Newsweek magazines for cool graphics that explained a complex geopolitical or economic issue. If you saw my post about the Phishpocalypse, you might have guessed that I love infographics. As usual the RISK team over at Verizon did a fantastic job crunching, analyzing, and reporting on a mountain of data from 19 different contributors. This year ThreatSim was invited to contribute data to the report.

CS 7450 - Information Visualization - Resources Resource Collections | Blogs | InfoVis toolkits & libraries | Data Sets & Collections | Companies/Products | Examples/Collections | Research Groups InfoVis Resources & Collections Daily Tekk - Over 100 InfoVis tools and resources AnalyticsZone Blog Guest post by Noah Iliinsky, IBM visualization luminary. This is a continuation of a series of posts covering the Four Pillars of Visualization. If you haven't done so already, please read the introductory post and the post, "Purpose: the bedrock of an effective visualization." Now that we have determined our purpose (the why of this visualization) we can start thinking about what we want to visualize. Our task is to include the relevant data (that which we know is useful) and to leave the rest out.

Posts by spaf I’ve been delayed in posting this as I have been caught up in travel, teaching, and the other exigencies of my “day job,” including our 15th annual CERIAS Symposium. That means this posting is a little stale, but maybe it is also a little more complete. I try to attend the RSA Conference every year.