The International Medical Journal for Students 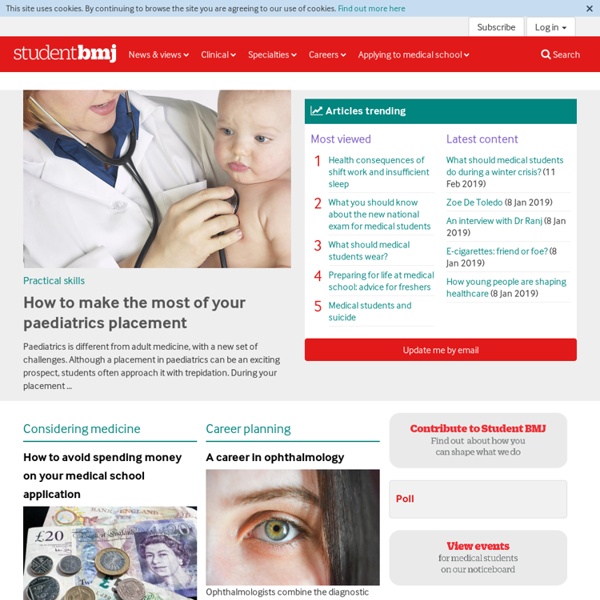 University Clinical Aptitude Test The University Clinical Aptitude Test (UCAT) is an admissions test used in the selection process by a consortium of universities in the United Kingdom, Australia and New Zealand for their medical and dental degree programmes. Launched in 2006 as the UK Clinical Aptitude Test (UKCAT), it was renamed in 2019 following the launch of the test in Australia and New Zealand. It is one of two main admissions tests used in the UK for medical, dental and other health-related courses, the other being the BioMedical Admissions Test (BMAT). Format[edit] For candidates sitting the examination in summer 2019, the UCAT consists of five subtests: four cognitive tests, and one testing your professional demeanour. Verbal Reasoning – assesses candidates' ability to think logically about written information and arrive at a reasoned conclusion. The situational judgement test is a different type of test from the tests above:[2] The test is an online test taken at a Pearson Vue centre near the candidate.

Home | Leukaemia and Lymphoma Research - beating blood cancers UCAT | UCAT Consortium The University Clinical Aptitude Test (UCAT) is an admissions test used by a consortium of UK Universities for their medical and dental degree programmes. The UCAT helps universities to select applicants with the most appropriate mental abilities, attitudes and professional behaviours required for new doctors and dentists to be successful in their clinical careers. It is used in collaboration with other admissions processes such as the UCAS application and academic qualifications. It is also your opportunity to stand out from other applicants and demonstrate your aptitude for a demanding programme of study. The UCAT is a computer-based test. More detailed information about the UCAT 2020 can be found here. Prior to 2019 the UCAT (University Clinical Aptitude Test) was known as the UKCAT.

Professor Ghulam Mufti | British Journal of Medical Practitioners Professor Ghulam Mufti qualified in Medicine at the University of Kashmir in 1973. He came to the UK in 1975, and commenced his training in haematology at Radcliffe Infirmary, Oxford, and Hammersmith Hospital Royal Postgraduate Medical School. Because of his interest in pre-leukaemic states, in 1981 the Leukaemia Research Fund awarded him a grant for a fellowship in Bournemouth, Southampton & Royal Posgratduate Medical School. He has extensive clinical and research expertise in myelodysplastic syndrome (MDS), leukaemias, and lymphomas. He has published numerous papers and chapters in scientific journals and textbooks on leukaemias. Professor Ghulam Mufti is head of the haematology department at King’s College Hospital.

UCAT Universities - Requirements and Scores - UCAT - The Medic Portal Each university uses UCAT differently. Some will care more about your overall UCAT score, while others will be more interested in how you scored for particular sections. And some don’t use UCAT at all, preferring BMAT instead. This guide outlines which universities require UCAT for admission, and how they use your scores. Jump to sections: Looking to boost your score for your chosen uni? Go to UCAT Course How Do Medical Schools Use Your Scores? Some medical schools place a great deal of significance on your UCAT scores. However, the majority of universities use UCAT scores in combination with other factors, such as your Personal Statement and A-Level exam results. You’ll get your UCAT results before the UCAS deadline, which gives you the chance to use your results and narrow down your medical school options. Which Universities Use UCAT As An Entry Requirement? Here’s a list of UK medical schools using the UCAT in their 2020 entry criteria and a summary of how they do so: More UCAT

Myelodysplastic Syndrome In some patients, MDS is an indolent disease. In the vast majority of the patients with MDS, the mortality is due to the cytopenias and resulting complications like bleeding and infections. In others, the disease follows an aggressive course and converts into an acute form of leukemia. Risk classification systems to estimate prognosis in patients with MDS have been developed by the French-American-British (FAB) Cooperative Group, the World Health Organization (WHO), and the MDS Risk Analysis Workshop. Refractory anemia (RA)RA with ringed sideroblasts (RARS)RA with excess blasts (RAEB; 6-20% myeloblasts)RAEB in transition to AML (RAEB-T; 21-30% myeloblasts)Chronic myelomonocytic leukemia (CMML) An underlying trilineage dysplastic change in the bone marrow cells is found in all subtypes. RA and RARS are characterized by 5% or less myeloblasts in bone marrow. RAEB and RAEB-T (see the image below) are characterized by greater than 5% myeloblasts. CMML may be associated with splenomegaly.

BioMedical Admissions Test The BioMedical Admissions Test (BMAT) is an aptitude test used as part of the admissions process for Medicine, Biomedical Sciences and Dentistry in some universities in the United Kingdom, Singapore, Spain, Malaysia, Thailand, Hungary, Croatia and the Netherlands. History[edit] BMAT was developed by Cambridge Assessment Admissions Testing in response to requests from academics at medical and veterinary schools for an assessment that would enable them to differentiate between applicants who appear equally well qualified and suited to the course, and provide a way of assessing the potential of students who have a range of different qualifications.[1] Initially, it was taken up by Oxford University for Medicine and Physiology (replacing the OMAT); the University of Cambridge for Medicine and Veterinary Science (replacing the MVAT) and University College London, for Medicine. Format[edit] BMAT is a 2-hour, pen-and-paper test, which consists of three sections. Section 3: Writing Task[edit]

Health Cookies on the New Scientist website close Our website uses cookies, which are small text files that are widely used in order to make websites work more effectively. Find out about our cookies and how to change them Health Log in Your login is case sensitive I have forgotten my password close My New Scientist Look for Science Jobs DNA nanobots deliver drugs in living cockroaches Pioneering implant revives legs of paralysed men Drama helps kids with autism communicate better TODAY: 17:01 15 April 2014 Improvised drama sessions may help develop communication, interaction, and imagination skills – the "triad of impairments" seen in autism Genetic risk of Alzheimer's has gender bias TODAY: 23:00 14 April 2014 Carrying a variant of the APOE gene increases Alzheimer's risk – but comparing men's and women's genetic risk suggests it's not that simple Syria chemical weapons deadline needs fair seas TODAY: 21:00 14 April 2014 We turn brainwaves into sound for music and medicine INTERVIEW: 18:00 14 April 2014 Cancer

What is the Hpat? The Hpat Ireland examination is an additional exam which students hoping to gain entry to undergraduate medicine in Ireland must sit. Universities in the Republic of Ireland combine your Hpat Ireland score with your Leaving Cert points, and the total determines whether you are successful in your application to study medicine. The following table equates the old points system with the new, following the introduction of the Hpat exam. The maximum score in the Leaving Cert is 625 (including 25 extra points for higher lever maths); this is adjusted to a maximum score of 565 for medicine entry. Understanding the Hpat: The Hpat examination is a test of general reasoning ability. Preparing for the exam: The style and format of Hpat questions will be alien to the vast majority of students. It is also important to note that the Hpat does not benefit from hours of continuous study. Changes on the Hpat exam: This year saw the introduction of two changes in the Hpat exam.

The Phrase, “Art and Science of Medicine.”