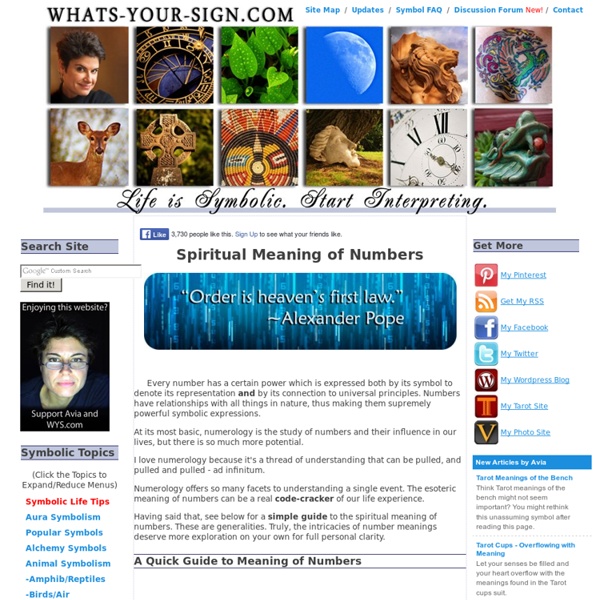 Every number has a certain power which is expressed both by its symbol to denote its representation and by its connection to universal principles. Numbers have relationships with all things in nature, thus making them supremely powerful symbolic expressions. At its most basic, numerology is the study of numbers and their influence in our lives, but there is so much more potential. I love numerology because it's a thread of understanding that can be pulled, and pulled and pulled - ad infinitum. Numerology offers so many facets to understanding a single event. Having said that, see below for a simple guide to the spiritual meaning of numbers. A Quick Guide to Meaning of Numbers What comes next? You may also be interested in my blog post on symbolic meaning of zero here. I hope you have enjoyed these persepctives on spiritual meaning of numbers. An Important Note About Signs, Symbols and Their Meanings As always, thanks for your willingness to learn more about the language of symbolism. Related:  Miscellaneous stuff

3 Censored TED Talks They Do Not Want You To See The current world order establishment has plenty to gain by keeping the people of the planet in the dark about ideas that can lead to a revolution in human consciousness. 1. Graham Hancock – The War on Consciousness Hancock's TED Talk, “The War on Consciousness”, was deliberately removed from YouTube: “Graham Hancock’s talk, again, shares a compelling and unorthodox worldview, but one that strays well beyond the realm of reasonable science. Graham Hancock is the author of major international bestsellers, his books have sold more than five million copies worldwide and have been translated into 27 languages. 2. TED also removed the recent talk by author and bio-chemist Rupert Sheldrake. 3. Entrepreneur Rick Hanauer's presentation is surrounded by controversy because after it was recorded, it was passed over for publication by TED. Related:

7 signs that your mind is free, according to history's greatest thinkers (NaturalNews) If a controlling power structure fears anything, it is free-thinking, self-empowered people. We focus a lot around here on how power hunger heads of government and corporations feed their greed at our expense. Exposing corruption is a good thing, because the truth needs to be known. Let us not forget, however, where our power comes from. During times like these, it's important to refocus on what it means to be free and take back your personal power. Everything can be taken from a man but one thing: the last of the human freedoms - to choose one's attitude in any given set of circumstances, to choose one's own way. 1. If your mind is free, you don't resist your thoughts. So often we judge our thoughts, fight them and feel bad because of them. What if you developed the practice of letting thoughts come and go, without judgment, and cherry picking the ones you like? 2. A free mind doesn't deny the truth of what it sees. 3. 4. 5. You are allowed to express your thoughts. 6. 7.

Dowsing with Your Pendulum Dowsing with Your Pendulum You start by learning how to use your Pendulum, especially the signals needed for accuracy and the correct method of asking questions. Learn to make your home healthy and prevent diseases. You can accomplish water divining, improving water quality, and locating people and objects . A Pendulum can be made from a paper-clip on a piece of cotton thread, a brass weight on a string, or a cannon ball on a chain (if you are strong enough to lift it !). First bond together with your Pendulum as a team, and let the Force for Good be with you - so hold your Pendulum in your ‘other’ hand (left, if you are right-handed) and say: "I, (your name), the owner of this Pendulum, declare that only the Force for Good can respond to my quests when using this Pendulum or any other Dowsing tool; I promise to use my Pendulum only for Good." You should be in a state of serious focus when using your Pendulum. If you are right-handed, then use your left hand for holding your Pendulum.

Dream Moods A-Z Dream Dictionary Symbols are the language of dreams. A symbol can invoke a feeling or an idea and often has a much more profound and deeper meaning than any one word can convey. At the same time, these symbols can leave you confused and wondering what that dream was all about. Acquiring the ability to interpret your dreams is a powerful tool. In analyzing your dreams, you can learn about your deep secrets and hidden feelings. To guide you with your dreams interpretations, we have interpreted over 5900 keywords and symbols and over 20,000 different meanings in our ever expanding dream dictionary. Every detail, even the most minute element in your dream is important and must be considered when analyzing your dreams.

New World Order and The New Age Occult Secret Destiny - by Terry Melanson ©, 2001 (Last update: May 2nd, 2005) The New Age Movement and Service to The Plan The New World Order as envisioned by the Elite is hardly a recent undertaking. If one failed to take into account the occult nature of the New World Order, they would be remiss. In 1980, Marylin Ferguson compiled and espoused a synthesis involving the theories of transformation and the secret plan of the Aquarian Age. Speaking of the networks and web of influence, Ferguson proclaimed: "There are legions of conspirators... in corporations, universities, hospitals, on the faculties of public schools, in factories, in doctors' offices, in state and federal agencies, on city councils and the White House staff, in state organizations, in virtually all arenas of policy making in the country [U.S.]... It is no coincidence that America has become the center of New Age and New World Order conspiracies. Another writer, from the opposite camp, confirms the assertions of Hieronimus.

This Overshadowed Planet - Wild Ideas Lecture Series, May 22, 1999 (Edited with links to relevant citations, August 2004) “The name of the game is 'Find Your Adversary'. Your adversary's game plan is to convince you that he does not exist.” - William S. Burroughs “There may be some kind of phenomenon - maybe something as materialistic as fluctuations in the earth's gravitational and magnetic fields, as was suggested by Persinger, a behavioral scientist from Canada, who suggested that energy fluctuations cause wave changes which cause hallucinatory or psychedelic states.” - Robert Anton Wilson “Lining up those charged particles or ions with magnets may provide some minor signalling benefit, but accelerating the charged particles with dynamic, non-linear and varying electric fields has been done for the body through millions of years of evolution or ever since Creation, whichever you believe, and provides the fundamental basis for life and health. Intro to Critical Thinking Guide to Logical Fallacies "Symbol.