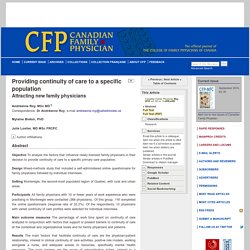 Design Mixed-methods study that included a self-administered online questionnaire for family physicians followed by individual interviews. Setting Monteregie, the second-most populated region of Quebec, with rural and urban areas. Participants All family physicians with 10 or fewer years of work experience who were practising in Monteregie were contacted (366 physicians). Of this group, 118 completed the online questionnaire (response rate of 32.2%).

Providing continuity of care to a specific population. Family Doctors Who Do More, Save More. Is a good family doctor one who treats your knee pain and manages your recovery from heart surgery? 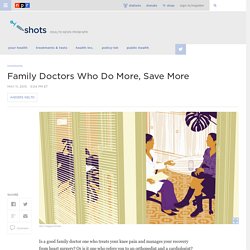 Or is it one who refers you to an orthopedist and a cardiologist? Those are questions at the heart of a debate about primary care – one with serious health and financial implications. A study from the American Academy of Family Physician's Robert Graham Centersheds some light on this topic. The findings, published in the latest issue of Annals of Family Medicine, suggest that family doctors who provide more care themselves save the health system money.

The researchers looked at 3,652 family physicians and 555,165 Medicare patients across the country. "Patients were 35 percent less likely to end up in a hospital if their family doctor was very comprehensive, compared with a doctor who was minimally comprehensive," says Dr. The researchers also found that doctors who performed a wider range of services reduced overall patient costs by between 10 and 15 percent. Top evidence summary value of continuity. Improving Clinical Access and Continuity through Physician Panel Redesign. The Only Certainty Is Uncertainty  The clearest lesson we can learn from scientific progress is how much we don't know and perhaps cannot ever know. 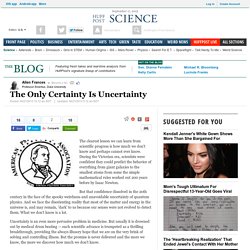 During the Victorian era, scientists were confident they could predict the behavior of everything from giant galaxies to the smallest atoms from some the simple mathematical rules worked out 200 years before by Isaac Newton. But that confidence dissolved in the 20th century in the face of the spooky weirdness and unavoidable uncertainty of quantum physics. And we face the disorienting reality that most of the matter and energy in the universe is, and may remain, 'dark' to us because our senses were not evolved to detect them.

What we don't know is a lot. Uncertainty is an even more pervasive problem in medicine. When I began medical school 50 years ago, nearly everyone expected that man made antibiotics would soon decisively win the battle against the lowly disease causing bacteria that had caused so much suffering and death throughout human history. The most critical factor in medicine? Human bias. In the summer of 2003, I finished my three-year residency in internal medicine and began a fellowship in oncology. 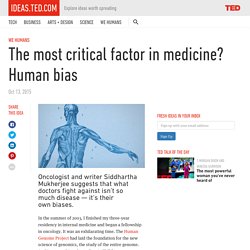 It was an exhilarating time. The Human Genome Project had laid the foundation for the new science of genomics, the study of the entire genome. And it was nothing short of a windfall for cancer biology. Cancer is a genetic disease, an illness caused by mutations in genes. Until the early 2000s, most scientists had examined cancer cells one gene at a time. The capacity to examine thousands of genes in parallel, without making any presuppositions about the mutant genes, allowed researchers to find novel, previously unknown genetic associations with cancer.

Bmj.j558.full(1) Bmj. The possibilities of patient-centered medicine. Iora Health pioneers new primary care model. BURLINGTON — A year ago, Jeffrey Davis had just about given up on going to the doctor. 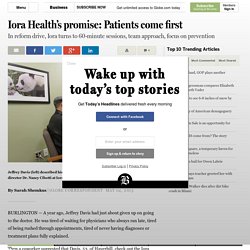 He was tired of waiting for physicians who always ran late, tired of being rushed through appointments, tired of never having diagnoses or treatment plans fully explained. Then a coworker suggested that Davis, 53, of Haverhill, check out the Iora Health practice in Burlington. There he found the attention, care, and personal interest that was so lacking in his past experiences. Advertisement “We can sit down and talk about anything,” he said after a consultation that covered a wrist injury, his attempts to quit smoking, and his cholesterol levels.

Davis is part of a large pool of Americans who have become disenchanted with the conventional approach to medical care. Iora, headquartered in Cambridge, runs 13 practices in six states, including in Burlington and Dorchester. “This is not a little different — it’s very different,” said Dr. Iora’s approach begins with the patient experience. Doctor Yearns For Return To Time When Physicians Were 'Artisans' Dr. 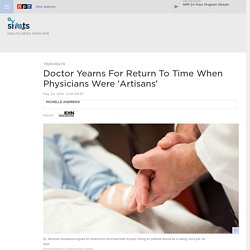