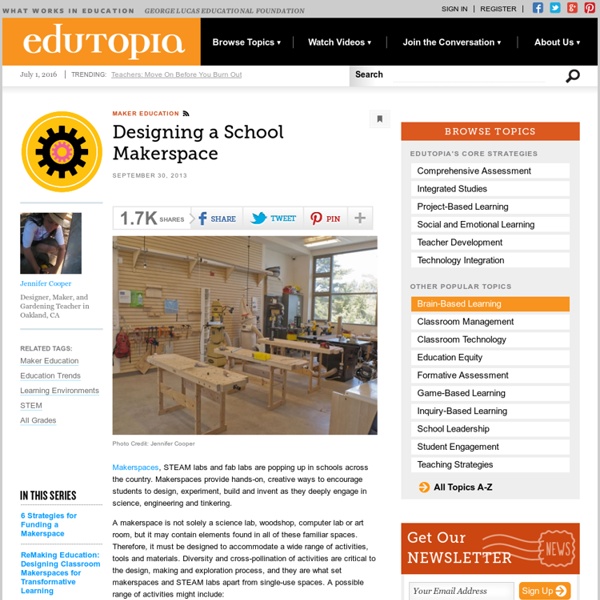 Makerspaces, STEAM labs and fab labs are popping up in schools across the country. Makerspaces provide hands-on, creative ways to encourage students to design, experiment, build and invent as they deeply engage in science, engineering and tinkering. A makerspace is not solely a science lab, woodshop, computer lab or art room, but it may contain elements found in all of these familiar spaces. Therefore, it must be designed to accommodate a wide range of activities, tools and materials. Diversity and cross-pollination of activities are critical to the design, making and exploration process, and they are what set makerspaces and STEAM labs apart from single-use spaces. A possible range of activities might include: Cardboard construction Prototyping Woodworking Electronics Robotics Digital fabrication Building bicycles and kinetic machines Textiles and sewing Designing a space to accommodate such a wide range of activities is a challenging process. Ask the Right Questions Going Forward

Starting a School Makerspace from Scratch With the National Week of Making behind us, you might be ready to start a makerspace in your school -- but not know where to start. Will purchasing a costly 3D printer and the latest robotics kit ensure learning and maker success? What are some steps to starting a successful makerspace from scratch? Step 1: Immerse Yourself in Maker Education

6 Strategies for Funding a Makerspace The Maker movement continues to gain momentum. At this year's White House Science Fair, President Obama invited Super-Awesome Sylvia from Auburn, California to exhibit her water color robot as a representative of the Maker community. At the same event, the Corporation for National Service announced its commitment to place Americorps VISTAs in Maker movement organizations across the country. Maker Ed is placing those Maker VISTAs in makerspaces to help build their capacity for engaging low-income students as makers.

Resources for Creating a Makerspace Are you ready to create your own Makerspace? Would you like some help? The Makerspace Lab website is designed to provide teachers, technology directors, librarians, hacker space designer and community leaders with information on how to make a Makerspace. The Makerspace community is very generous, and provides a lot of free information about how to build a space, lessons learned and tips for running a Maker Space. The following list of links should get you started. Advocating for Makerspaces in Libraries Since I first started my Makerspace at Stewart Middle Magnet School in January 2014, I have received a lot of positive feedback. I’ve given talks, presented at conferences, and shared about our experiences through my blog and through social media. Some of the questions I am most frequently asked are: Why should makerspaces be in the library? Why not just convert a classroom into a STEM lab? In a similar vein, I often hear from librarians who are struggling to get their administration/teachers/community to understand the rationale for having a Makerspace in their library.

Arduino + Chromebook With over 5 Million units sold in 2014 alone, Chromebooks are a growing trend among schools and homes. One of the biggest drawbacks to Chromebooks has been the inability to connect it to any hardware (i.e. Arduino) -- until now. Favorited Favorite 2 Where EdTech meets TechEd Create a school makerspace in 3 simple steps As maker education gains steam, many educators are looking for ways to incorporate making and tinkering into their schools and classrooms — often on a shoestring budget. “Kids are saying they want to learn more about technology and science, but they also want to experience it creatively and use it personally,” said Dale Dougherty, founder of Make Media, which produces Maker Faire and Make Magazine. He’ll address how educators can deliver these types of experimental learning experiences during ISTE 2014’s EdTekTalks, a provocative series of mini-keynotes from thought leaders beyond the world of ed tech. “One of the ways we can do that is create more makerspaces for kids. Part of my talk will be leading the charge to say let’s build more makerspaces inside schools, libraries and even community centers.” But what makes a makerspace?

ISTE 2015: Takeaway Tips for a Library Maker Space Maker station at the ISTE Librarians Digital Age Playground at the 2015 ISTE conference in Philadelphia. The maker movement was front and center at the 2015 ISTE conference—and that’s a good thing for me. After following maker initiatives with great interest for some time now, I have the opportunity to design a maker space this year for 6th–12th grade students at my school, Worcester (MA) Academy. A search of this year’s program at ISTE, held June 28 to July 1 in Philadelphia, using the term “constructivist learning/maker movement” resulted in 67 related sessions.

A Librarian's Guide to Makerspaces: 16 Resources "There were more than 135 million adult makers, more than half of the total adult population in America, in 2015." What is a makerspace? You’ve no doubt been hearing that word more than a few times over the past several years.

Dissecting the Un-Makerspace: Recycled Learning It starts with a twist, a squeak, and a cheer. Watch out, 1980s cassette player, broken computer mouse, old monitor -- my fifth graders and I are looking for you! Your future doesn't hold a dumpster in it, at least not yet. You, my memory of past innovation, get a second life. Why?

Want to Start a Makerspace at School? Tips to Get Started As the Maker Movement starts to gain momentum, schools that are trying to find ways to foster the do-it-yourself environment can learn a few lessons from another nexus in the universe: public libraries. Dale Dougherty, founding editor and publisher of Make Magazine — and the de facto leader of the Maker Movement — has a vision to create a network of libraries, museums, and schools with what he calls “makerspaces” that draw on common resources and experts in each community. Libraries and museums, he said, are easier places to incorporate makerspaces than schools, because they have more space flexibility and they’re trying to attract teens with their programs. “Schools have already got the kids,” Dougherty noted wryly, at the recent American Library Association Midwinter Meeting in Seattle. One day during the conference, dubbed Maker Monday, focused on the Maker Movement, which emphasizes learning by engaging in tech-related projects.

The True Adventures of a High School Librarian: JCHS MakerSpace a Go Go! The adventure of creating a MakerSpace in the James Clemens High School library has taken off with a lot of help from my friends! Once my principal, Dr. Brian Clayton, approached me about bringing a MakerSpace to the JCHS Library this year the first thing I did was crowd source my amazing PLN for ideas and resources.